Arlington: County Board Plans to Turn Parking Lot into Park 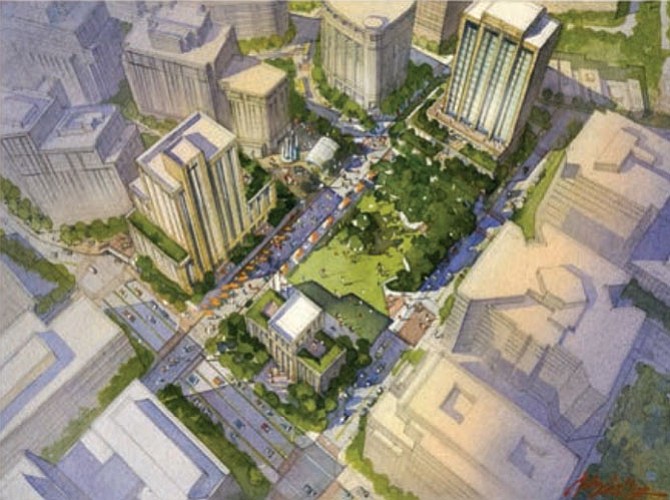 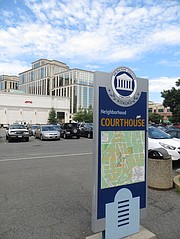 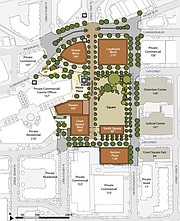 Big changes are coming for the Courthouse Sector. A new civic building and a new county administration building are among the proposed additions to the site, as well as expansions onto nearby promenades and streetscapes. However, the largest change is the opening up of seven acres on the site to open space, including a replacement of the existing parking lot with a green park space. According to the Courthouse Sector Plan, these plans all center around giving the Courthouse neighborhood an identity.

At its July 18 meeting, the County Board unanimously voted to approve advertisement of the Courthouse Sector Plan Addendum: Courthouse Square, effectively updating and replacing the 1993 addendum which identified the need for a state-of-the-art government center and public space in the area.

The planned open space at Courthouse Square is divided into two major pieces: the Central Square across from the County Government Center, and the South Square along 14th Street North. The Central Square will include a “memorial grove” portion of the park, which consists of paths and seating areas located throughout a garden environment. To the south of the grove, an open field referred to as the front lawn of Courthouse Square will accommodate special events and outdoor markets. The South Square will largely be used as a stormwater management area for the rest of the park.

The plan also proposes a greater emphasis on pedestrian walkways for many of the streets and avenues surrounding the site. The portion of Uhule Street that runs along the park will be closed off and converted into a walkway promenade. Wilson Boulevard between N. Veitch Street and N. Courthouse Road will be reconstructed to expand the county sidewalks and improve existing bike-lanes.

To add to this park, the county will need to replace the existing parking lot that currently covers much of the square. The plan recommends an underground parking garage with access to the north and south of the park. Further designs for the parking garage, like entrance placement and funding, are contingent on a follow-up parking study.

But these future studies left some local residents with concerns. While many nearby residents expressed their support for the concepts of the plan, others questioned the plan’s long-term practicality.

Ben D’Avanzo, newly elected president of the Clarendon-Courthouse Civic Association, expressed concerns he’d heard about the county focusing too heavily on Courthouse Square and seemingly abandoning Courthouse Plaza to the west, which D’Avanzo described as a commercial dead zone. D’Avanzo said he’d also heard concerns regarding funding for the changes.

“There are some very expensive community amenities proposed,” said D’Avanzo. “Underground parking is extremely expensive. We’re concerned as a community about the reality of these benefits coming to pass.”

According to D’Avanzo, many of the local residents would like to see the funding that would go into the park go into other nearby buildings with community benefits. D’Avanzo said the neighborhood had recently lost a community center, and a replacement would help the local community more than the proposed parking garage.

“The parking benefits broader community, but not locals,” said D’Avanzo. “We can’t support this plan until these funding solutions are identified.”

Other local Arlingtonians expressed similar concerns about the lack of concrete plans presented on parking and other proposed amenities.

“Way too many studies here have not been done,” said June O’Connell. “The parking study has not been done. You don’t really know to the degree to which taxpayers might have to fund the underground parking lot. You don’t know the degree to which the taxpayers might have to pay for that metro entrance. These are not small things to just be casually left to future boards … Too much is being left undone.”

But according to Mary Curtius, a communications officer for Arlington County, that stage of the process is still a long way off.

“We’re looking at years in the future here,” said Curtius, adding that some plans reach as far as 2040. Curtius added that the cost assessments and evaluations would be done closer to specific project elements’ implementation.

Nancy Iacomini and Brian Harner, members of Arlington’s Planning Commission, attended the meeting to emphasize the commission’s approval and clarify some of the guidance given to staff, mostly related to parking. Iacomini emphasized that the parking needed to be right sized in the garage, not only for access to the park and nearby commercial zones, but to ensure that the county government was accessible to the public. Harner said the Planning Commission had some differences of opinion with staff in terms of what retail was appropriate in the area and what type of streetscapes the county should implement. According to Harner, one of the Planning Commission’s main emphases, though, was on ensuring bike parking in the garage to keep consistent with other cities with strong bike cultures. According to Arlington County Chair Mary Hynes, the board will be able to provide greater clarity on these issues as the conversation continues to evolve and the plans start to emerge.

County Board Vice-Chair Walter Tejada emphasized that the Courthouse Sector Plan Addendum is a process.

“This is an attempt to envision a future of what [Courthouse Square] could look like,” said Tejada. “Future County Boards can make adjustments to that vision.”

Tejada said he strongly felt that Arlington County needed a central community gathering space and described the park design as similar to the National Mall. But as the board unanimously voted to approve the vision, Tejada also clarified that the county took note of the citizens’ concerns.

“This is an advertisement of the project,” said Tejada, “this process will continue.”

With board approval, that continuation will occur at public hearings in the Planning Commission on Sept. 8 and the County Board on Sept. 19 to consider the plan’s adoption.