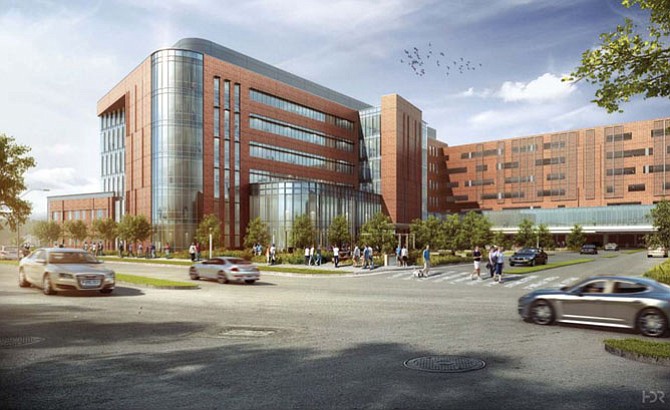 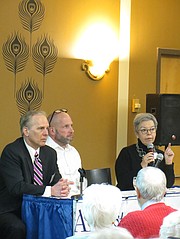 On the morning of March 14, the Virginia Hospital Center needed 421 beds for those needing in-patient care. The hospital has 350. While the hospital has outgrown its current space, ongoing plans to expand the hospital into a neighboring county-owned lot has been met with some hostility from neighbors who say the new development will tower over the surrounding homes. At the monthly Committee of 100 meeting, advocates from the hospital, neighborhood, and the county offered their views on the divisive expansion plans.

The Virginia Hospital Center is one of three independent hospitals in the state. The hospital has seen 37 percent growth since 2009, from 16,857 inpatients to over 23,000. It's the second busiest hospital in Virginia for births, and is expected to continue growing by 40 percent over the next few years.

Adrian Stanton, vice president of business development and community relations for the hospital, said the hospital desperately needs more inpatient beds and needs to increase its mental health capacity. The state has given the center permission to expand its operations, but the room to do so will come from a proposed land swap with Arlington County. The hospital is planning on expanding into a neighboring five-acre parcel adjacent to the site. The site is currently owned by Arlington County but is mostly unused. The county will trade the land for a parcel of land on Carlin Springs Road.

The new site would provide outpatient services, allowing the hospital to be separated by inpatient and outpatient services. That would free up two floors of the existing hospital space. The hospital could add 82 beds to the floor space, but is only approved by the state to add 44 beds to meet the immediate need. Stanton said the hospital will petition the state to increase the number of beds once the current project is completed.

But while no one disputes the hospital's needs, Tracy Greiner, chair of the Virginia Hospital Center Expansion Neighborhood Task Force, said many nearby residents are unsettled by the scale of the project. Griner said residents looked at what happened to Walter Reed, where hospital improvements came with new floodlights shining directly into nearby homes. The floodlights, in this case, is the proposed 10-story tall extension residents have taken to calling The Wall.

One of the proposals put forward by the neighbors was to take more of the height and shift it underground. But Stanton said that the cost for a parking garage triples per space when it moves underground, which takes money away from patient care.

“I understand the hospital concerns about money into the ground instead of into people, but there’s room for compromise here,” said Planning Commissioner Nancy Iacomini. “The neighborhood should consider, though, that if there’s bedrock that means blasting.”

In addition to the scale of the building, the expansion is also expected to have a substantial impact on local traffic. Griner said the hospital has been working with local residents to implement changes that will help mitigate those impacts, but at least one resident's front view will be of a new traffic light directly facing his living room.

On the county side, Iacomini explained the upcoming Site Plan Review Process (SPRC) and examined the planning aspects of the development.

"It is unusual to have this large a proposal in a residential neighborhood," Iacomini said.

The SPRC is currently working through the site's issues with scale and traffic impact.

Iacomini said the SPRC process doesn't end with a vote. Instead, the group attempts to come to a consensus and deliver a joint opinion to the Planning Commission in a public hearing. Then it will go to the County Board for another public hearing and a vote in June.

“It’s unusual to have this large a proposal in a residential neighborhood,” said Iacomini. “This isn’t an easy site, but in Arlington, there are no easy sites. All [of the proposals] are infill.”