‘The Boys Next Door’ at Port City Playhouse
Votes

‘The Boys Next Door’ at Port City Playhouse

Show features mentally challenged characters who are funny and poignant. 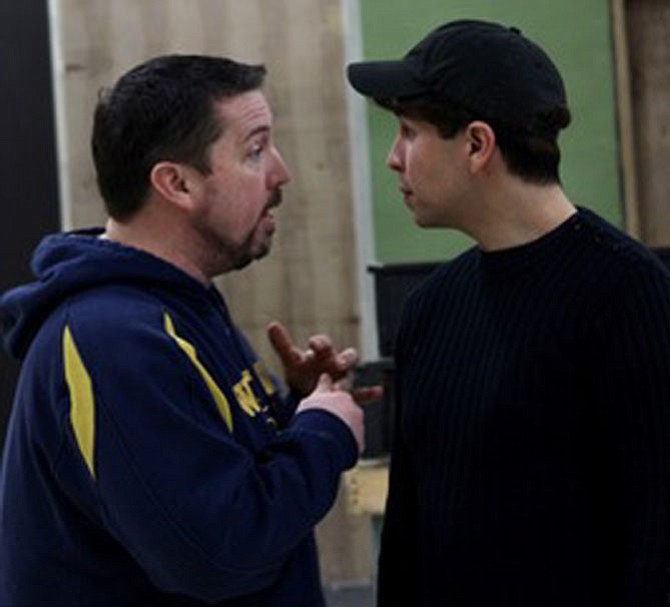 Cast members of Port City Playhouse's production of “The Boys Next Door” in rehearsals. Photo by Kylie Miller/The Gazette

Port City Playhouse, which used to be in Alexandria but moved to Falls Church, is presenting “The Boys Next Door” from Feb. 16 to March 3. In an urban communal residence in New England, four mentally handicapped men live under the supervision of a "burned out" social worker named Jack. Norman, who works in a doughnut shop, is unable to resist the lure of the pastries and takes pride in the bundle of keys that dangles from his waist; Lucien has the mind of a 5-year-old, but imagines that he is able to read and comprehend the weighty books he lugs about; Arnold, the ringleader of the group, is a hyperactive, compulsive chatterer, who suffers from deep-seated insecurities and a persecution complex; while Barry, a brilliant schizophrenic who is devastated by the unfeeling rejection of his brutal father, fantasizes that he is a golf pro. Playwright Tom Griffin brings us into a world where the "little things" of daily life sometimes become momentous – and often funny – and are mingled with moments of great poignancy.

Director Kevin Sockwell decided to direct because it is one of his favorite plays and he performed one of the roles many years ago. “The story is about how even mentally challenged people have dreams, goals, aspirations, desires and the need to connect and relate despite their handicaps and limitations. I feel it is important to note how people, even different from ourselves, are people and worthy of dignity and respect,” he said.

He said the challenges of directing this show is to allow for natural humor out of the absurdity of the character behaviors while not being condescending or falling into caricatures of how mentally challenged individuals behave. “A very tricky fine line, but I feel the actors took on this mission and have discovered that balance wonderfully. I am very proud of how the cast took on this mission and have found very realistic and lovable characterizations,” he said.

Producer Mary Beth Smith-Toomey wanted to produce for two reasons: She loves the show and the message it delivers, and Sockwell is a friend who she really enjoys working with. “His insights on this show have been particularly on point because of his professional life and because he's been in the show,” she said.

She said the biggest challenge is getting all the tech people to get this show mounted. “With this show, getting a light designer has proved impossible, so I am designing it myself. Something I have not done since college,” she said.

Jerry Gideon plays multiple roles including Mr. Klemper, who has an estranged relationship with his schizophrenic son. “But the father suffers from the same form of the illness as father and son, only the father can function in society, whereas his son has been institutionalized most of his life,” he said.

“Primarily because the father cannot demonstrate his affection or deal with his son's inability to communicate with his domineering father, this reunion after nine years is stressful for the son, and ultimately only reinforces the gulf between them, though both clearly had hopes that this reunion might have a different ending,” he said.

He added that in the end, the father leaves the boy worse off than before, yet sadly leaves with the only way he can express his love for his son — a promise of chocolates sent at Christmas.

Matt Williams plays the role of Norman, an intellectually impaired man in his late 30s. “He loves his job working at a local donut shop, although it’s caused some sudden weight gain, which is wreaking havoc on his romantic interest, Sheila. Norman is a sweet and romantic guy — more than anything else, he dreams of a lot of things that we all dream of — love, marriage, and family,” he said.

He said for him, the greatest challenge with this character is in the balance. “The characters deserve as much honesty and realism as can be given, but still have to remember that it’s a comedy,” he said.

Janet Davis plays three smaller characters: Mrs. Fremus, Mrs. Warren, and Clara. “Mrs. Fremus is a deaf widow who lives in the neighborhood and to whom Barry tells his problems. Mrs. Warren is a younger mother who just moved in next door to the boys and meets them while looking for her son’s lost hamster. Clara is a new friend to Sheila. They both attend one of the dances for the developmentally challenged at the community center,” she said.

As far as challenges, she said: “I’ve never played multiple characters in the same play, so that was challenging for me — to create separate and distinct people for each character.”

William Jeffreys is playing the role of Lucien, who has the mental capacity of a 5-year-old. “The great thing about this character is that he is happy go-lucky and easily excitable. However, he is oblivious to a lot of what goes on around him because he focuses on key words, and not the whole picture. However, there are some instances in the play where he is able to zone in on what the other characters are saying, and it makes for a different interaction,” he said.

He added: “When we began rehearsing, I was worried about ‘doing too much’ or ‘not doing enough.’ Playing someone who is mentally disabled is a slippery slope because you don’t want it to look like a caricature, but you need to be believable.”

Mary Ayala-Bush is playing the role of Sheila, who is mentally challenged and the love interest of Norman. “She is happy and is attracted to Norman. She loves flowers and frogs. Her focus is on getting Norman's keys as she sees getting his keys as a sign of love,” she said.

She said it was a challenge to portray a mentally challenged individual without either being a stereotype or being disrespectful of the person. “Throughout the rehearsal period, the focus was on what would be her motivation and her understanding of what things meant that has driven the characterization of Shelia. I also found myself having a better understanding and respect for individuals that may not be as intellectually gifted as the rest of us, and that love and patience can overcome much of our misunderstanding,” she said.

John Wakefield plays the role of Arnold, the ringleader of the four men who live in the group apartment. “He certainly fancies himself the brains of the operation, and he spends most of his time overthinking every moment of his life. Most of the show is spent worrying or despairing about some aspect of his life or another. His workplace bully, his unusual grocery list, some girl named Helen who has a tic, the incident with the rugs, and so on and so forth,” he said.

Michael Schwartz plays the role of Barry, a 28-year-old man with schizophrenia who believes he is a pro golfer. “He is highly sensitive partly because of his upbringing and would do anything to impress his father,” he said.

He said playing a character with a mental illness is quite challenging, especially in a play that has comedic parts. “Barry is a schizophrenic, and ends up situations that can be quite funny because of his mental illness. That being said, I didn't want Barry to be a cartoon. Trying to be funny and being realistic as possible is a very difficult challenge,” he said.

Port City Playhouse is presenting “The Boys Next Door” from Feb. 16 to March 3. Show times are Fridays and Saturdays at 8 p.m.; Sundays at 3 p.m. Tickets are $18 and $20. The venue is located at the Sleepy Hollow United Methodist Church, 3435 Sleepy Hollow Road, Falls Church, between Columbia Pike and Route 7. Visit www.PortCityPlayhouse.com.