Disability and Diversity in Arlington
Votes

Disability and Diversity in Arlington

Fight continues for integration of students with disabilities into new Wilson School site. 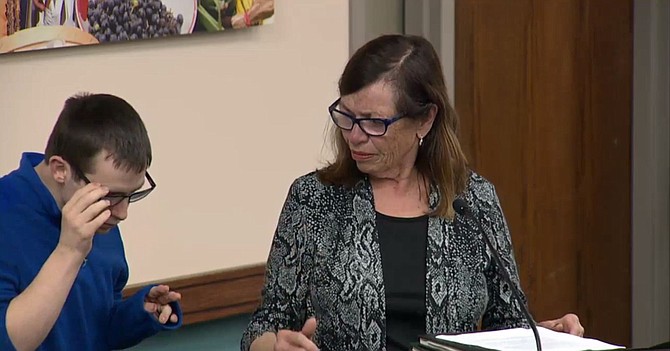 At the center of discussion was a door in the Wilson School designs. While all of the entrances are handicap accessible, this door to the side was noted specifically as the entrances for students with disabilities. But the discussions about the school also raised other concerns, like the fact that the students at the Stratford Program will be located entirely on the ground and first floors, meaning that students with disabilities in the Stratford Program will have minimal opportunities to interact during the school day with other students.

Leading the public comment, 14 parents spoke up to call for a more inclusive design at Wilson and across Arlington schools. Anne Kelly took to the stand with her son, Russell Kelly, who lives with disabilities. Russell Kelly graduated from Wakefield in 2006, and Anne Kelly shared that, because her son had been enrolled into a classroom, he had a positive high school experience. “He was learning and was welcomed by his peers,” said Anne Kelly. “Teachers reported that his presence was having a positive effect on other students. Student’s respect towards each other increased, and the school counselor even asked if other students [with disabilities] could be included in classrooms .… It’s beneficial for our students who have special things to be with other students.”

But parents said that this experience is not universal for children in Arlington schools, nor is equality for students with disabilities uniformly spread across the schools.

“My son has Down syndrome and attends Nottingham,” said Heather Eilers-Bowser. “As a prospective student at Stratford, I want to ensure my son is not relegated to a seperate entrance or any other kind of disparate treatment.”

Eilers-Bowser noted that 15 percent of the APS student body, or roughly 4,000 students, have a disability.

“Over 500 student spend all or almost all day in completely separate classrooms,” Bowser said. “We have a long way to go.”

Keith Shannon, a father of a pre-k student with special needs, says the fight for greater diversity in Arlington schools is part of an ongoing nationwide effort to reform and integrate students with disabilities into the classrooms.

“Just 45 years ago, children with special needs had no federal right to attend school,” said Shannon. “It was legal, and not unusual, for children with disabilities to be excluded … please ensure that Arlington doesn’t take a step back into history with arbitrary and needless barriers for students with disabilities in the new Wilson building.”

Superintendent Patrick Murphy addressed the concerns of parents, saying discussions were continuing to occur and the public would be involved.

“There is dialogue going on behind the scenes about different aspects related not only to Stratford and Wilson, but the whole idea of inclusion,” said Murphy. “As part of that discussion … we are having conversations about the layout and design of that and considerations that can be brought to bear. Those things are being relooked at. The idea of inclusion in services is something we are continuing to look at.”