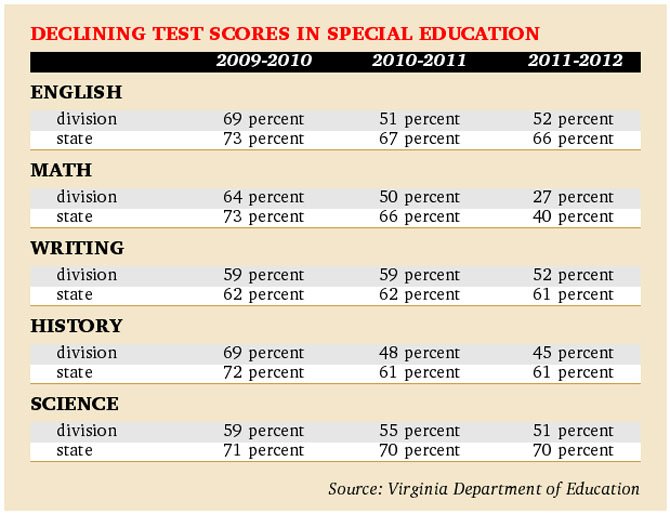 The last three years have seen test scores plummet for students with disabilities, a group that constitutes an expensive and vexing challenge for Alexandria City Public Schools. Special education students have the highest cost per per pupil and the lowest scores in the system. In the last few years, school administrators have launched a program of “inclusion,” bringing special education students out of their own classrooms and placing them in the general population. The initiative has had mixed reviews, and it’s become a point of contention on the campaign trail this year.

“This is good for social skills but not good for learning,” said Chyrell Bucksell, candidate in District B. “It’s important that they get the best social skills so they can be able to interact and that they get educated in the way that’s best for them in the best environment for them, and that’s not inclusion.”

Bucksell is not the only candidate to be critical of inclusion. In a series of interviews with the 11 candidates running for the three contested seats this year, opinions varied about how the program was conceived and how it’s been funded. The two incumbents running for reelection in District A and District B defended the idea and how it’s been implemented.

“I believe inclusion is properly staffed,” said Marc Williams, who was first elected in 2008. “We will certainly, in the next budget process, have the opportunity to see if it needs to be calibrated.”

“It takes time for teachers to become comfortable with this and become expert at it,” said Helen Morris, who was first elected in 2009. “But I believe we are on the right path.”

WHEN ASKED ABOUT the reason for the declining scores, several of the candidates were critical of the current School Board. Some suggested that cutting the number of special education teachers was a mistake, even if the population of students with disabilities has decreased by 260 students in the last four years. Others say current members have simply not been listening.

“I think our current School Board has made a practice of not listening to parents,” said Heath Wells, candidate in District B. “And I think that’s one of the reasons why we are having problems with our scores.”

The school system currently has about 1,500 special education students, which costs taxpayers about $24 million a year to educate. That’s about 285 positions. Earlier this year, School Board members considered a proposal that would have reduced the number of special education teachers while increasing the number of paraprofessionals, a move that some candidates said might be a mistake.

“If you talk to the teachers, they’ll tell you they are stretched too thin,” said Justin Keating, candidate in District B. “There are plenty of ways that more resources for special ed, whether it be teachers or supplies and technology, can also be used in a lot of ways to benefit the general population.”

FAILING TEST SCORES has been a problem for city schools for years, although the No Child Left Behind Law has made the deficiencies more transparent. A 2008 review of the school system by the Virginia Department of Education found six areas where Alexandria City Public Schools was not meeting the needs of its special-education population. That was also the conclusion of an audit conducted by the Virginia Association of School Superintendents. Administrators say they are working to implement recommendations outlined in the audits, but some of the candidates say progress has been too slow.

“[Superintendent of Schools Morton] Sherman and the board has been able to get away with this because there hasn’t been enough focus on it,” said Bill Campbell, candidate in District A. “If I’m on the board, they won’t be able to do that.”

But creating a new focus for special education may prove to be a challenging task for the next School Board. The division has a goal of including 80 percent of students during 80 percent of the school day. Meanwhile, funding is tight and special education is already one of the most expensive areas of the budget. Nevertheless, several of the candidates said they would push for more funding.

MOST OF THE CANDIDATES support the program of inclusion, although several were critical of how it’s been implemented. Recent changes to funding for special education, for example, were seen by many as the wrong course of action. Several said that the next School Board had to use the budget process to make sure that inclusion was properly funded to fully realize the vision.

“Inclusion was working great the first year they introduced it because a lot of the teachers understood it and it worked really well. The second year it’s underfunded, and the third year they changed the program and it’s nonexistent,” said Karen Graf, candidate in District A. “So yeah, you can sit there and tout the philosophy, but what you do matters and they are not doing it well.”

“They have been mainstreaming a lot of children into regular classrooms, taking them out of supported services and so that’s going to create issues where the numbers do get lowered because they don’t have those support systems,” added Joyce Rawlings, candidate in District A. “You’re putting more children in mainstream without the proper supports in those classrooms.”

Several candidates called for a district-wide needs assessment to determine which schools needed the most help so that resources could be properly channeled.

“I know that there are lot of special education teachers in Alexandria who are stretched way too thin right now,” said Kelly Carmichael Booz, candidate in District B. “And it’s really incumbent on the principals and the administration to say we need to get more resources into the school.”

Many of the candidates praised the autism program at John Adams Elementary School, saying it was a model that other school systems should follow. Ultimately, though test scores show that special-education students continue to fall behind. That’s an issue that will fall on the shoulders of the next School Board, which will have at least six new members next year.

“I wish there were a silver bullet, but there’s not,” said Kapsis. “In the end, it comes down to having strong leadership in the classroom.”