Two Entrances; One Community in Arlington 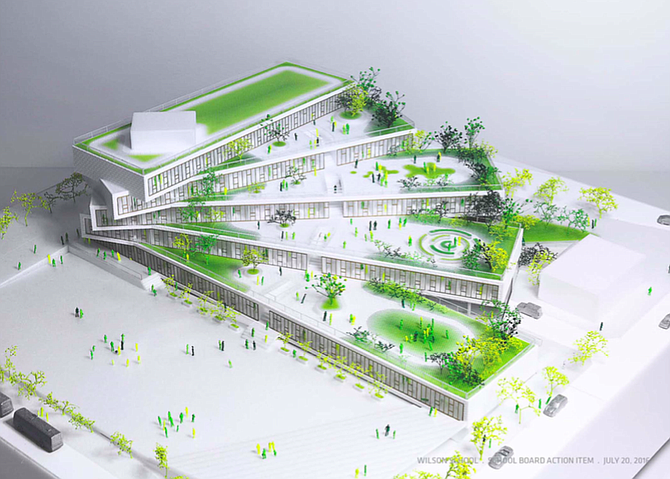 Map showing the location of the new Wilson school site in Rosslyn.

“I wish we had more aggressively used universal design principles in this building. I wish we had one entrance, like we do at all of the other high schools.” — Nancy Van Doren, School Board member

“The point tonight is not whether the Stratford Program should exist, nor questioning whether every entrance is wheelchair accessible; the design sends the message that it’s OK for students with disabilities to use separate entrances and stay out of sight.” — Tauna Szymanski, parent

When the Wilson building opens, most of the students will funnel into the building through one entrance. Three programs: H-B Woodlawn, the HILT program, and the Stratford Program will be housed in the same building starting in 2019. But at the final approval for the school design at a Jan. 18 School Board meeting, there were concerns that a second entrance designed for students with disabilities would keep some of the students segregated from the others.

The Wilson site has had a troubled development history, most of which centered around the fact that the building will temporarily be sharing part of its space with a fire station. But in the final approval of the building design, several parents and community members came forward to express their concerns about the separate entrance.

“The point tonight is not whether the Stratford Program should exist, nor questioning whether every entrance is wheelchair accessible; the design sends the message that it’s OK for students with disabilities to use seperate entrances and stay out of sight,” said Tauna Szymanski, the parent of a child with significant support needs. “The design prevents natural interactions between students with disabilities [and their peers]. Special facilities make people feel stigmatized and inferior, it’s why we don’t allow separate drinking fountains for African-American students or separate bathrooms for transgender students. Why do we think it would be acceptable to have seperate entrances for disabled students?”

“No community is without members with severe disabilities,” said Best. “Getting past the disabilities and developing relationships with kids can be challenging. Having them hidden from the community by fully segregating them in separate programs with seperate entrances doesn’t help.”

“We learned LED lighting allows some students with visual disabilities to read and see better,” said Chadwick. “We also take great deal of care to make sure HVAC system doesn’t make noise that would make it hard for any student to hear in the classroom. It’s very much how we can think about every aspect of the school so students aren’t segregated and differentiated from each other.”

But some on the board said they wished more efforts had been undertaken to help integrate the needs of students with disabilities into the building design.

“I wish we had more aggressively used universal design principles in this building,” said Nancy Van Doren, School Board member. “I wish we had one entrance, like we do at all of the other high schools. I would like to not have to be reminding of this all the time, but have it be our common practice. Inclusion and universal design not only makes it better for students on daily basis but makes us a stronger community.”

School Board member Reid Goldstein said overall he was satisfied with the several year public process that led to this design, and noted that some things had changed to help integrate the student body.

“I was satisfied ... that this wasn’t a one-off discussion where they designated Stratford issues for one meeting, talked about it then ignored it,” said Goldstein. “I’m told the building started out with two libraries, two cafeterias, two clinics, became one. It was apparent there were changes made as a result of input from outside groups and discussion.”

Goldstein also warned that if the plans weren’t approved, it could negatively impact the timeline for the school opening.

“We’re on the cusp of approving the funding for this, after which we’re moving full speed ahead for 18 months to open in September 2019,” said Goldstein. “There’s a large hole in the ground at that site; a significant delay would ensue if we were to change [the design]. We have so many more things contingent on this building opening on time in September 2019.”

The Wilson school design was unanimously approved by the School Board.