Fortner and Hill are recognized for lifesaving actions. 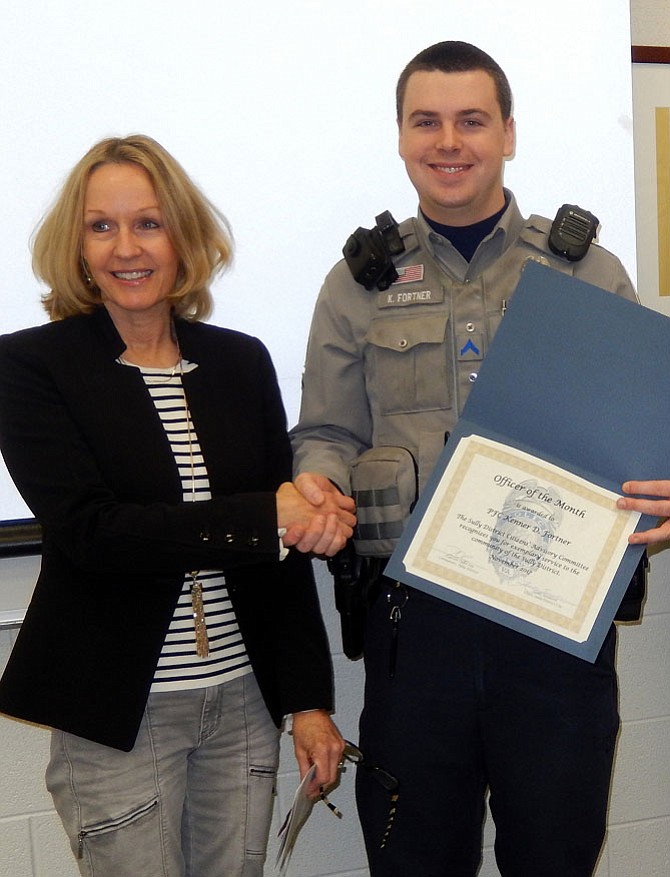 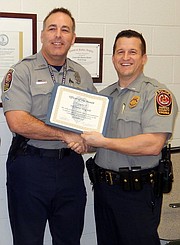 Instead of honoring just one Officer of the Month, as usual, Sully District Station police recently recognized two. PFC Kenner Fortner and PFC James “Troy” Hill were named Officers of the Month for November 2017 at the Jan. 10 meeting of the station’s Citizens Advisory Committee.

In her writeup nominating them, Sgt. Sharon Perry explained why both officers were deserving of the honor. And she noted how they were able to use specialized training to help save a man’s life.

She said that, during pre-shift, roll-call training on Nov. 2, 2017, members of the Midnights A-Shift conducted refresher drills using Police Department Tactical Emergency Causality Care (TECC) kits. These kits, which are mounted in each police vehicle, include several lifesaving tools an officer may need to assist a community member in a time of emergency and until specialized rescue personnel can arrive.

“The initial TECC officer-training began in 2013, and each patrol officer has a good understanding of the equipment and its intended use,” wrote Perry. But, as with any skill, proficiency with the TECC kit may diminish over time.

“To keep current, officers are encouraged to remain familiar with the equipment through training and to practice learned techniques,” she wrote. “One of the most important items in the TECC kit is the tourniquet – a device for stopping the flow of blood through a vein or artery, typically by compressing a limb.”

On Nov. 2, little did Fortner and Hill know that, less than an hour after receiving the refresher training, it would prove invaluable to them when they used it on a call. That night, shortly after 9 p.m., a man called the Department of Public Safety Communication Center and said he’d accidently shot himself in the leg.

“PFC Hill and PFC Fortner quickly responded to the scene,” wrote Perry. “On their arrival, the officers located the wounded man on his front porch, waving his arms and screaming in pain for help.”

Seeing his bleeding leg, both officers took immediate action. With a complete TECC kit in hand, Hill used the scissors to quickly cut away the man’s pants leg to better assess the injury.

“Hill noticed that the bullet wound was located on the front, left thigh and immediately applied pressure to the wound to help stop the bleeding,” wrote Perry. “Fortner coordinated with Hill and applied the tourniquet above the bullet wound. Fortner took over applying pressure to the leg wound while Hill checked the man for additional or secondary injury.”

Meanwhile, said Perry, “During this stressful time, the wounded man shouted hysterically that he was going to die. Fortner compassionately calmed the man as best as the situation would allow, despite noticing the man turning pale in color and shaking involuntarily. Fortner worked to keep the man’s focus on staying alive and encouraged him to take slow, deep breaths to slow his rapid heart rate.”

When Emergency Medical Personnel arrived, they were able to take over the lifesaving efforts. “After the man had made it safely to the hospital and his situation fully stabilized, both emergency-department doctors and the on-scene paramedics praised the officers for their decisiveness and correct placement of the tourniquet,” wrote Perry.

She said the medical professionals concurred that the care provided by Hill and Fortner was “instrumental in preventing massive blood loss and potential loss of life.” So, she wrote, “Because of their quick action, decisiveness and selfless acts to help a community member in a great time of need, PFC Troy Hill and PFC Kenner Fortner have been chosen as Officers of the Month for November 2017.”