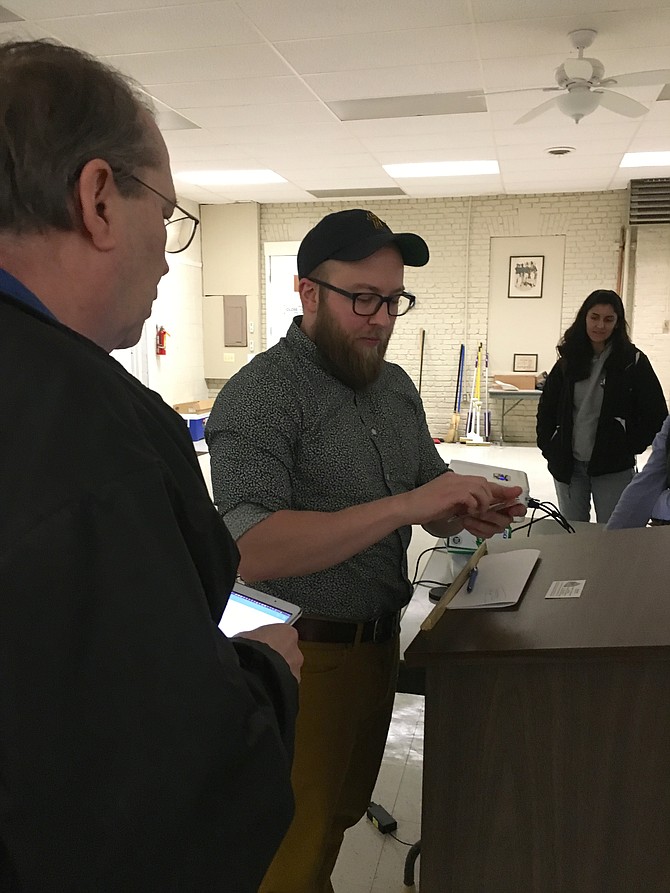 Historian Joshua Howard answers questions from local residents after his talk on the African American Civilian Conservation Corps work along the C&O Canal during the 1930s and ’40s. Photo by Peggy McEwan/The Almanac

The schedule for a typical day for men working at the Conservative Conservation Corp camps along the C&O Canal included:

The C&O Canal Trust and the C&O Canal National Historical Park hosted a lecture Sunday, Feb. 25 about the two African American Civilian Conservation Corps (CCC) camps that existed along the C&O Canal from 1938-1942.

Historian Josh Howard shared his original research about the camps which were located along the canal, one at Carderock, Company 333, and the other near Cabin John, Company 325.

The Civilian Conservation Corps was established by then President Franklin D. Roosevelt as part of the New Deal program. The Corps provided jobs for unemployed men between the ages of 18 and 25, mostly working on projects related to conservation and the protection of natural resources.

The canal was purchased by the Federal Government in 1936-37, Howard said.

“It had hardly been touched in over a decade,” Howard said. “It required an absolutely, unbelievable amount of labor to reconstruct. The vast majority of the men who worked on the C&O Canal were African American.”

Two camps, under the supervision of the U. S. Army, were set up along the canal to house Corps members whose main mission was to reconstruct the canal from Georgetown to Great Falls. About 150-200 members lived in each camp which included bunkhouses, a mess hall, administrative quarters, a recreation building and 5-10 other structures, Howard said.

Being a member of the CCC was very much like being in the Army, according to Howard, with a strict schedule including morning reveille and flag raising at 6:30 a.m. and lights out at 10 p.m. The work day was from 8 a.m. to 4 p.m.

The men moved a lot of dirt, Howard said.

“Another thing they did was build structures at Great Falls that are still standing,” he said. “They renovated Lockhouses 5, 7 and 10.”

Unfortunately, he added, the CCC did not document the work well. Nor are there many documents that share the history of the two camps or of the men who worked there.

Howard did not avoid the politics of race relations during the time of the CCC. All but a very few administrators were white, even in the African American camps, and the camps were segregated. Both camps of men working on the canal were for African American men.

Howard said that they were the only two camps that worked on the canal.

The first came to the area from near Fredericksburg, Va. after the white population did not want them in their area, Howard said. The second, was established in response to the demand for more camps for African Americans.

The C&O Canal Trust, the official nonprofit partner of the Chesapeake & Ohio Canal National Historical Park, offers three to five programs each year according to Becky Curtis, director of programs for the group.

The next scheduled talk will be on Supreme Court Justice William O. Douglas and his role in preserving the park. That will be followed by a hike to Great Falls, she said.

For more information about the Trust, visit www.canaltrust.org.