Medha Gupta, 16, saw a problem, learned to code, and solved it. 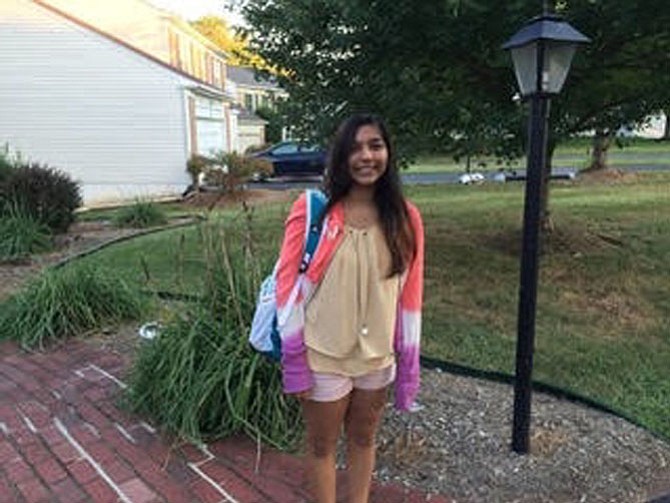 Medha Gupta, 16, of Herndon won the 2017 Congressional App Challenge for Virginia's 10th District with her original app, "Safe Travel." Gupta taught herself how to code in two days and built her winning app in one week. Photo courtesy of Medha Gupta

U.S. Rep. Barbara Comstock (R-10) announced in a press release on Jan. 5, 2018, that Medha Gupta, a 16-year-old student from Herndon, won the 2017 Congressional App Challenge for Virginia's 10th District. Gupta, who attends Thomas Jefferson High School for Science and Technology in Alexandria, was one of the more than 4,100 high school students who signed up to participate in the national challenge aimed to engage students in coding and computer science.

In the district-wide competition hosted by Members of the House, students created and submitted original software applications or apps, coded for mobile, tablet, or desktop devices. Code is the language of technology. It helps build apps that bring ideas to life utilizing STEM and computer science education to solve real-world problems.

WINNERS were named from each of the participating 190 Congressional Districts. Comstock explained that Medha’s winning app, called Safe Travel, is designed to help people who are commuting alone feel safer in their commute.

Comstock explained, "The Safe Travel App sets a timer that will count down and automatically sends an emergency message to your predetermined contact, letting them know you are in trouble if you do not notify the app that you have arrived safely."

On the entry form for the Congressional App Challenge, it stated the submission would be judged on the quality of the idea, including creativity and originality; implementation including user experience and design; and demonstration of excellence in coding and programming skills.

Comstock reported Virginia's 10th District, "...is full of hardworking students who have each built innovative apps on their own time as part of their desire to succeed in the STEM fields which continue to be critical in today’s economy."

She added, "Medha’s hard work and skill in building this app were exemplary. I applaud her, as well as each of her fellow 10th District students who competed this year, for the time and effort they put into building their Apps and developing practical technological solutions for an everyday problem."

In the YouTube video that accompanied her application, Gupta said she got the idea for her app when walking home from the school bus stop. "I felt really unsafe. It was getting late. It was dark. And that's not how someone should feel... I thought there had to be a solution... I decided to create an app called Safe Travel."

In an interview for this story, Gupta said she did not know how to code when she got the idea for her app. "I sat down for two days and learned Swift which is a programming language for iOS apps. After that, I developed it over a week-long period. Once I felt it was done, I revealed it to my family."

AS FOR THE FUTURE, Gupta said, "I'd like to create an Apple Developer account. Then I would like to improve some of the features of Safe Travel to make it more efficient for the user. "

Asked what the cost of the app would be for the consumer Gupta replied, "I'd like to make it a free app so that the everyday person has access to it."

Gupta stressed the app would be beneficial to college students, joggers and kids like herself. "I think that it is important to practice safety while traveling. And hopefully this app, Safe Travel makes it very easy to do so,” she said.

According to the Congressional App Challenge website, winners will be invited to "...showcase their apps to the Members of Congress and members of the tech community at #HouseOfCode, a reception on Capitol Hill to be held in April 2018. Their work is eligible to be featured for one year on the permanent display in the U.S. Capitol Building and on the House.gov website. Each winning student will also be awarded $250 in Amazon Web Service credits, donated by Amazon Web Services.