Retired teacher Mary Lipsey of Ravensworth tells of the community’s years-long fight to save their land from development. 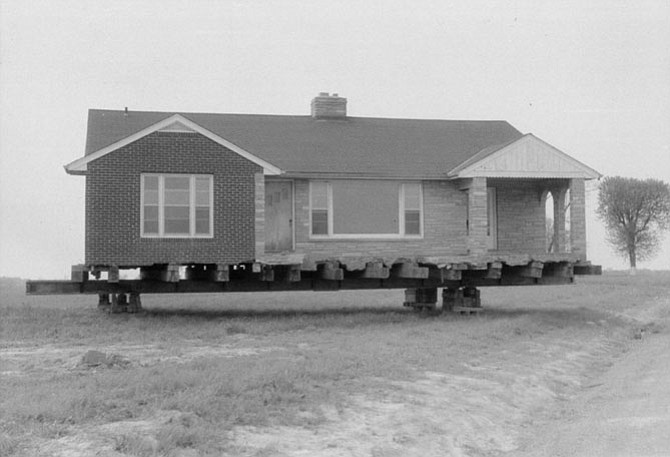 A Burke home being hauled away by a flatbed truck due to the Burke Airport. Photo contributed

On June 13, 1951, a government official went into the Burke Post Office and posted a notice that the Federal government would be condemning 4,000 acres of land in Burke.

Judge Paul Brown, who lived at Brimstone Hill, was an early opponent of the Burke Airport.

The Post Office in Burke back in the day. 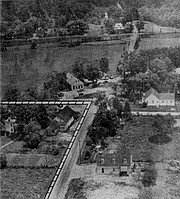 An aerial view of Burke’s boundary. 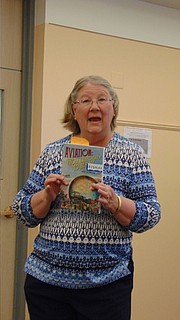 Retired teacher Mary Lipsey of Ravensworth told the story of “Burke Airport?” and the community’s years-long fight to save their land from development on May 24, 2018, at the Kings Park Library.

Back in the 1950s, before Chantilly was chosen as the site for Dulles Airport, the community of Burke was selected to build Washington’s new international airport.

In her 45-minute talk, “Burke Airport?,” retired teacher Mary Lipsey of Ravensworth told the story of the community’s years-long fight to save their land from development. The talk was presented by the Burke Historical Society on May 24, 2018, at the Kings Park Library.

It all started in June 1941 when Franklin Roosevelt dedicated Washington National Airport and in three short years, it was already up to full capacity, said Lipsey, a 15-year retired American history teacher. “They said we have a problem; we have larger jet planes and our airports are tiny. So, in 1950 they passed the Airport Act, which provided for the construction of a second airport in the Washington area, signed by Harry S. Truman,” said Lipsey, author of the book, “Aviation: From Curiosity to Reality.”

LIPSEY said on June 13, 1951, a government official went into the Burke Post Office and posted a notice that the Federal government would be condemning 4,000 acres of land in Burke. Mrs. Fowler was Postmistress at the time and the citizens did a “Paul Revere” around the neighborhood to get 300 people together for a meeting to discuss the news; it would be the first meeting of the Burke Civic Association.

By October 1951, the government had acquired 1,000 acres in Burke, paying homeowners a paltry $100 per acre for their property. The exact location of the Burke Airport would be from the vicinity of the Burke Post Office down to Burke Lake Park, on the side of Burke Lake Road where Sunrise Living sits today.

Lipsey said the airport split friendships, caused people move away or have their homes carted off on flatbed trucks and moved to other locations. In 1950, the Burke population was 200; by 1952, some 36 families had moved out, and by 1960 the population went down to 150. The farmers were hurt the most because their livelihood was taken away from them. The government budgeted only $14 million for the airport but it would cost closer to $50 million.

Some of the “pros” of the new airport included: longer runways than National Airport and suitable for more air traffic; it would provide lucrative tax revenue; would provide convenient air travel for Burke residents; and would bring an upsurge of economic growth for the county. The Citizens Committee for Burke Airport supported it.

Some of the “cons” of the airport were that the terrain in Burke was too hilly and would have to be reshaped; Burke’s historic homes would be destroyed or damaged; and noise pollution would increase.

Other “cons” were that the Burke airspace was already crowded with the use of the Quantico Marine Base, Fort Belvoir, and the Dahlgren Naval Base; the Fairfax County Board of Supervisors was not informed about the airport coming because the Federal government had not consulted them; the airport could be ruinous to future residential development; and the construction would destroy the Pohick Watershed. They said 3,000 persons within five-mile radius would suffer adverse effects to their homes and occupations and the runways at Burke Airport would be “flaming daggers” aimed at Fairfax and Annandale high schools in the event of an airplane crash.

In August 1951, Jasper Jones of Fairfax Station sued the government because the airport would be built within 12,000 feet of his 100-acre farm and that his cows would be greatly harmed. But he lost the suit.

The airport had a few opponents, including: Virginia congressmen; Burke Communities Civic Association; the Fairfax County Board of Supervisors; the Springfield Civic Association and the Burke Airport Relocation Committee.

By 1953, people had been moving out of Burke but nothing was happening. The government had stopped buying more property and the negotiations stalled. Dwight Eisenhower was the new president and in July 1953, there was a Congressional study that said Burke was not suitable for the location.

By 1957, $12.5 million more was appropriated for the airport. By then, Burke citizens started sending letters of opposition to their Congressmen as well as officials all over the country. Lipsey said that was the smartest thing the Burke people did because it seemed to work. The idea for a Burke Airport soon vanished.

In January 1958, hearings were held in Congress to recommend moving the airport further out to Chantilly. There was an African-American community there called the Willard community that the government purchased because they didn’t expect to receive resistance from its 100 homeowners. Chantilly, which old-timers recall having a store and a post office in those days, was flatter and more suitable for the Dulles Airport. Lipsey said the fate of Willard was lost when that airport was chosen for the site.

THE ORIGINAL BURKE LANDOWNERS were offered to repurchase their land and auctions were held. But many people had already moved away; during 1951-1958 much of the land was not repurchased. So, an auction was held June 13, 1959, that was opened for developers to buy the land. It was around this time that Fairfax County purchased 218 acres to buy Burke Lake Park, at a price of $50 cheaper than what developers paid.

Soon after in 1960, construction of the Kings Park subdivision had begun. By 1962, the Dulles Airport was officially opened and dedicated, and on May 25, 1963, Burke Lake opened, whose water source was the Pohick Creek.