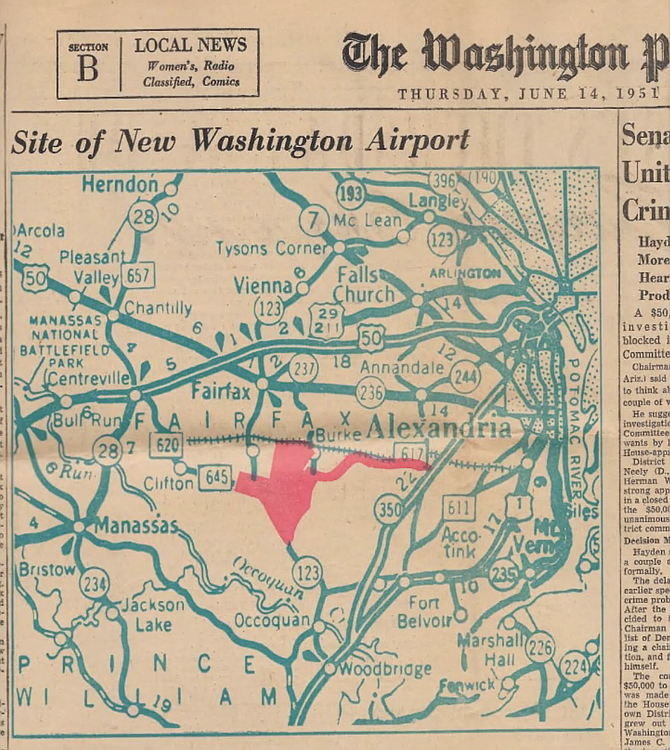 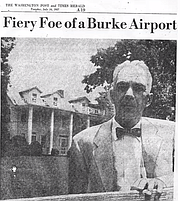 Judge Paul E. Brown, photographed at Brimstone Hill, was credited with leading the Burke citizens’ fight to keep the airport “out of their backyard.” 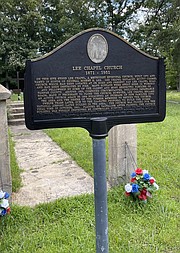 Burke, Virginia, now an 11.5 square mile unincorporated section of Fairfax County with a population of roughly 41,000, was fated to disappear in 1951. In that year, the federal Civil Aeronautic Administration announced plans to “condemn” 4,520 acres for a needed second airport in the growing metropolitan region. “Condemning land,” an action we now refer to as “land seizure” or “eminent domain” is the power to take private land for public use. As attendees of the Burke Historical Society’s June 24 evening virtual program learned, if not for the efforts of a small group of citizens, Burke would have been the site of the area’s second regional airport, instead of Chantilly, home to what is now named the Washington Dulles International Airport. Dulles Airport now encompasses 20.3 square miles.

The story of the citizens’ fight against the location of the airport was one of several family stories about old Burke told by presenter Paula Brown Kelley, a descendant of the area’s prominent Brown family. Her grandfather, Paul E. Brown, a circuit court judge, and her grandmother, Elma, a real estate developer, acquired the country “farm” property from Elma’s father, Jeremiah Donovan. Donovan was a butcher who owned land at the four corners of the intersection at Burke Lake Road and Route 123 early in the 20th century. The couple met on one of Elma’s many excursions to the “farm” from D.C. to enjoy country life. Kelley shared the family story of her grandfather riding his mule from Clifton to Burke to court Elma.

Before Paul and Elma moved there, the house came to be called “Brimstone Hill,” likely during the Civil War. In the mid-1800s the property belonged to tavern owner, Charles Arundell, and was called “Arundell’s Ordinary.” The tavern had a whiskey license and was frequented by union troops who were often garrisoned in the area near the railroad line during the war. Kelley and her family speculate that the name Brimstone Hill was likely dubbed by those union soldiers who imbibed the fiery alcohol.

Jumping forward in time, from its predominantly rural character, the Burke area began growing after World War I, as government workers sought to reside within an easy commute to the District of Columbia. Further growth, region wide after World War II, made the need apparent for a second airport in addition to the then titled Washington National Airport. It took seven years after the Burke site was announced, but The Washington Post later reported “Burke residents credited Fairfax County’s Circuit Court Judge Paul E. Brown and Senator Pressor Holland (D-Fla.) with keeping the airport out of their backyard.”

The community of Burke was saved, but didn’t go untouched. Many families moved from the area as the Federal Government began purchasing land for the proposed airport in 1951. An area church, Lee Chapel, lost membership, was closed, and later control-burned in the mid-’50s to prevent further vandalism. The 1951 government land purchase is now the home of the popular, 888-acre Burke Lake Park, with its 4.7-mile lake trail. Brimstone Hill, no longer held by the Brown family, is a private residence.