Taking a Trip Back in Time
Votes

Taking a Trip Back in Time 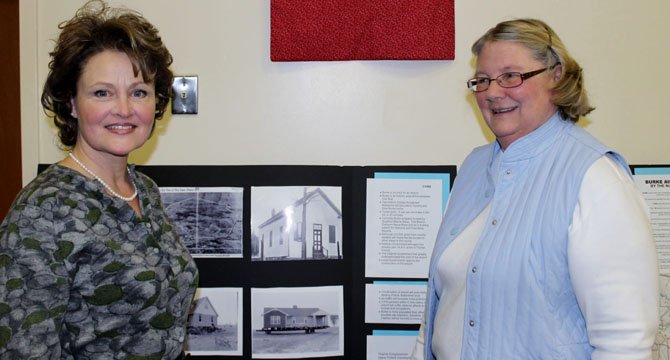 Christine Zinser and Mary Lipsey of the Burke Historical Society presented the background to many Burke residents’ opposition to an airport in the community in the 1950s. Photo by Janelle Germanos

If it weren’t for a group of concerned citizens in the 1950s, Burke could have very well been the site of a major airport.

This revelation, along with many others concerning Burke’s opposition to an airport, was the topic at the latest meeting of the Burke Historical Society.

Burke residents and historical society members Mary Lipsey and Christie Zinser took the audience back to the 1950s, when the federal government considered Burke for the Washington, D.C. metropolitan area’s next major airport.

Although Chantilly was chosen for the site of Dulles Airport, the debate over the airport’s location in the 1950s shows a lot about the area’s history, including the work of dedicated citizen organizations.

“We often study what has been,” said Jon Vrana, president of the Burke Historical Society. “This is a history of what wasn’t.”

On June 13, 1951, a notice from the federal government was posted at the Burke Post Office, located next to today’s fire department. The notice stated that the government would begin condemning land, 4,500 acres to be exact, in Burke for use for an airport.

According to Lipsey and Zinser, planes would be flying right over Silas Burke’s house. It was the opposition to this airport that led to the creation of the Burke Civic Association.

The condemnation of land would largely affect farm owners, who owned large amounts of land in the Burke Area.

“The idea of the airport split people’s friendships,” Lipsey said. “People moved out of town. Some people actually moved their homes.”

According to Zinser, who was fascinated by Burke’s involvement in this series of events leading to Chantilly being chosen as the airport’s location, Burke was a serious contender for the location because of monetary interests, as groups like the Washington Board of Trade and Chamber of Commerce supported the airport in Burke.

The Fairfax County Board of Supervisors and Burke Citizen’s Association were opposed to Burke as the location for many reasons, saying that the airport would decrease property value, increase noise pollution, and impact more citizens than if another location was chosen.

On Jan. 14, 1958, Chantilly was selected, which Zinser and Lipsey said is because the federal government didn’t think they would get as much resistance from citizens of the small town of Willard, which was largely African-American.

The impacts of Burke almost being the site of a major airport can still be seen today. Many of the old farmhouses were purchased by the federal government and were offered for sale after Chantilly was chosen, but most homeowners could not afford to buy back their property. The current location of Burke Lake Park is on land originally intended for the airport.

Willard will be the topic of discussion at an upcoming Burke Historical Society meeting, which Vrana encourages residents in the area to join.

“Members can go on field trips. We recently went on a tour of the U.S. Capitol that was supposed to last 30 minutes, but ended up being three hours,” Vrana said.

According to Vrana, there are a variety of aspects of history that members are interested in.

“I enjoyed researching the debate surrounding the placement of the airport, and finding out what wasn’t apparent,” Zinser said.

Membership allows for countless research opportunities, Vrana said, and is a good resource to have for genealogy projects.