A hands-on experience in civic activism at Forestville Elementary. 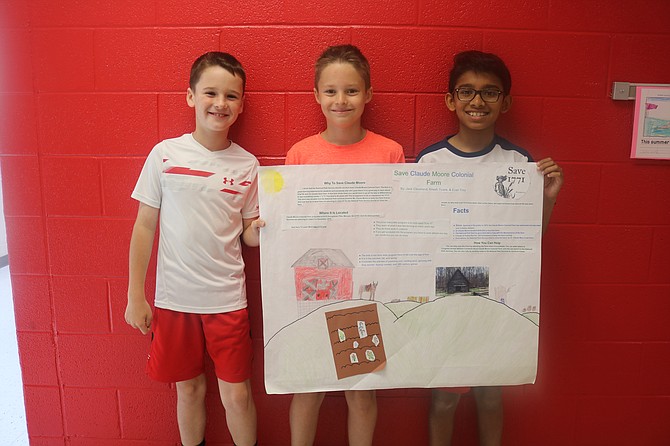 “The farm helps you see what it was like back then in your own eyes.” —Daisy Whaley, Fourth grader at Forestville Elementary

After learning about the functions of government in social studies, the fourth grade students at Forestville Elementary are now applying their lessons outside the classroom. Lead by their teacher Nancy Crotty, these young students are exercising their rights as they campaign to save the local historical site, Claude Moore Colonial Farm.

Once a thriving tobacco farm in the 1770s, the land off Georgetown Pike is now a living museum. Located directly adjacent to the CIA headquarters, the colonial farm served as a highway dumping ground before it was restored by the National Park Service in the 1970s. The site was operated by the NPS until Friends of the Claude Moore Colonial Farm incorporated to operate the park in the early 1980s and secured a 30-year lease agreement.

Though the colonial farm has been host to more than 2 million visitors since then, the long term agreement has now expired and negotiations with the NPS have stalled, according to the Friends of the Claude Moore Colonial Farm, leading the park service to force the closure of Claude Moore Farm this December.

These plans, however, have faced sharp resistance from the community, including from U.S. Rep. Barbara Comstock.

After reading about the park’s closure in the newspaper, Forestville social studies teacher Nancy Crotty gave her fourth grade classes the project-based learning assignment to help save the farm. Conducting their own research about the farm’s history, operations, and events, the students grouped together to make posters advocating against the NPS’s decision.

While completing the assignment the students learned about the importance of the colonial farm and its value as an educational resource. “The farm helps you see what it was like back then in your own eyes,” said Daisy Whaley, a student in Crotty’s homeroom class. When asked why they wanted to save the farm, another student Sophia Ojo explained that it gives a real perspective of how people lived back then. “I won’t take things for granted,” she said, “They had lived without air conditioning, appliances, or even bathrooms.”

In addition to their posters, the fourth grade students have written letters to both the NPS and representative Comstock in support of her proposed legislation to save the farm.

The management of Claude Moore Farm has held rallies to draw attention to the issue, however, the future of this cherished community site is still uncertain. As the worried fourth grader, Kriesh Tivare explained, if Claude Moore closes, “there won’t be any more farms in the area to provide the same experience”.

To learn more about the farm and how to get involved, visit www.1771.org/savethefarm.