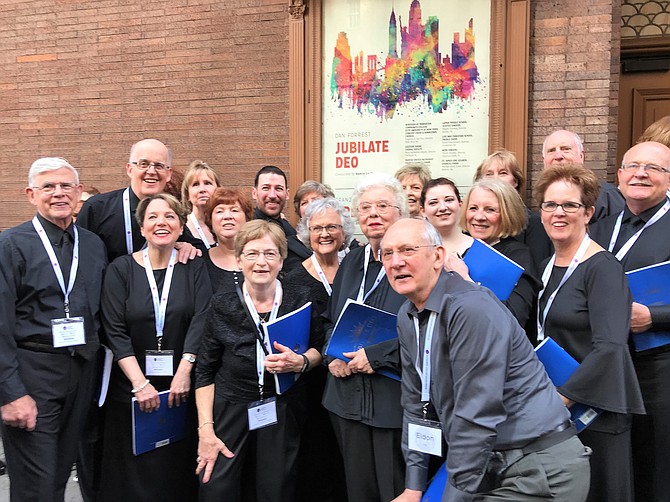 Not many people can say they performed in New York City’s hallowed Carnegie Hall.

But 20 members of the Fairfax United Methodist Church Chancel Choir can.

They sang Monday, June 11 along with eight other select choirs nationwide and formed the Masterwork Festival Chorus. They performed one large choral piece called “Jubilate Deo” by composer Dan Forrest of South Carolina and conducted by Henry Leck of Indianapolis.

“It was fantastic,” states Jonathan Giblin, D.M.A., who led rehearsals locally and also sang with his group for a full house in this “once-in-a-lifetime experience.”

Based on the Psalm 100 text — “O be joyful in the Lord, all ye lands” — the 45-minute choral piece praises God in seven languages: Latin, Hebrew, Arabic, Mandarin, Zulu, Spanish and English. Giblin describes the music as very multi-cultural and powerful.

Giblin, has worked five years as the director of music ministries at FUMC. A graduate of the University of Cincinnati College — Conservatory of Music in Ohio, he is a highly-sought expert on the 17th century German organist and composer Heinrich Scheidemann.

“It was one of the best chorale events I have ever heard,” says Rev. David J. Bonney, 51, lead pastor of FUMC.

“I am very proud of them,” he beamed. “They worked hard and they sang with a lot of joy.”