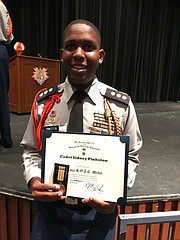 Cadet CPT Sidney Pinkston, a junior at Hayfield High School, was awarded the Sons of the American Revolution Bronze Medal for outstanding leadership, military bearing and excellence during the school's annual JROTC Awards ceremony May 16. Cadet Pinkston, a member of the National Honor Society and a football player, was promoted to captain and became a cadet company commander during the ceremony. Following graduation in 2019, Cadet Pinkston hopes to attend a university with an ROTC program and become an officer in the Army.