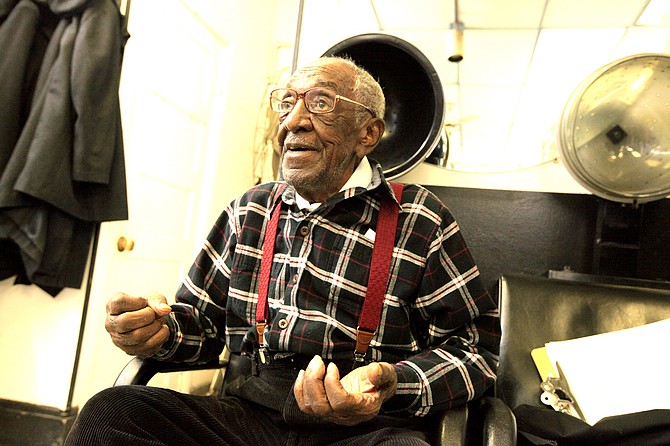 William Charity, who drove a taxi in Alexandria for 52 years, was the eldest parishioner at Ebenezer Baptist Church and died on June 15. Here he sings with the Barbershop Bible Study Ministry at the All American Barbershop in Old Town at 1106 Queen St. Photo by James Cullum/Gazette Packet

William Charity, the 102-year-old former Alexandria taxi driver with a heavenly voice and gentle disposition, died in his sleep at the Regency Care of Arlington on Friday morning, June 15. Charity drove a cab in Alexandria for 52 years, served as a deacon at Ebenezer Baptist Church for decades and only last year stepped down from leading the men’s chorus at the church.

“We are absolutely at peace. There’s no sorrow. My father prepared us for this, and he was a God-fearing man. He left his house in order,” Michael Charity said of his father. “What did he teach me? With a name like Charity, you can’t embarrass it. You see? With an odd name like that you can’t hide. They know you’re a Charity and you carry it with you always.”

William Charity was born to Rozier and Maggie Charity in Upperville, Va., on March 13, 1916. He had 10 brothers and sisters and moved to Alexandria when he was four years old. His parents died shortly after his first marriage, and he raised four of his younger siblings with his wife, Ruth, who had five children — Beverly, Michael, Diane, Vicki and Rozier — with Charity, but died in 1965. Charity was also married to Adella Charity for over 30 years until her death.

"I’ve been very fortunate here in Alexandria,” Charity told the Gazette Packet last month. “Everybody knows me. I bet you can’t hit three people in the head that don’t know me. And nobody knows my first name. Everybody calls me Charity."

He also drove taxis through segregation for the Star Cab Company and All American Cab.

“In that way, he came in contact with a lot of predominantly black customers, the lawyers, the doctors, the preachers in the city, and some of these lawyers and judges and leaders now were little boys that used to drive in his cab,” Michael Charity said.

Former Alexandria Mayor Bill Euille was raised near Charity’s family on the north side of the city, and frequently rode with to the grocery store, school or the doctor’s office. As mayor, Euille issued city proclamations honoring Charity on his 90th, 95th and 100th birthdays.

“Deacon Charity was a stalwart at Ebenezer Baptist Church, and very well known throughout the city. He will be missed,” Euille said. “He always seemed laid back, cool, calm and collected. He always had a big smile, he loved to joke and be around people. A lot of folks respected him and he had a lost of wisdom. What was amazing to me was that he always remembered people’s names and he could conduct conversations with you on many topics, even after he turned 102.”

Charity was one of the eldest Alexandrians, outlived only by his neighbor Margaret Chisely, who turns 107 on June 26. He was also a member of the Barbershop Bible Study Ministry at the All American Barbershop at 1106 Queen St., and in a recent weekly meeting revealed his secret to longevity.

"Mind your own business and treat people the way you want to be treated," Charity said.

Diane Marshall said that her father was a pillar of the community, always worked professionally and was always on time.

“He always wore a white shirt and a tie, and he was never late. He always prided himself on that,” Marshall said. “And now he’s singing in the heavenly choir, because he loved to sing so much.”

“A prince has fallen,” Jackson said. “He was a prince of the people. He was everybody’s kind of guy. He didn’t talk down to you. He really helped you to take you to where you were and accept you for who you were, and he helped me to be a better pastor… He was the songbird of the church. He had a song to sing and a story to tell.”

Deacon Ron Jewell considered Charity, who was an uncle through marriage, as one of his best friends.

“He was a gentleman and a scholar, and he loved the Lord. It will be strange living in the world without him,” Jewell said. “When he walked through the door he had so much dignity and confidence. As he got old and feeble, I’d take good care of him. He’d come to me in his walker in church every Sunday, and he could sing, and he’d sing all the way to the end of the service. His signature song was ‘Jesus Keeps On Blessing,’ and after he turned 101, he threw down his cane and walked singing that song.”

Charity’s funeral is on Saturday, June 30, at 9 a.m. at Ebenezer Baptist Church, followed by a wake at 11 a.m. and burial at Mount Comfort Cemetery.