Being Black in Northern Virginia
Votes

Being Black in Northern Virginia 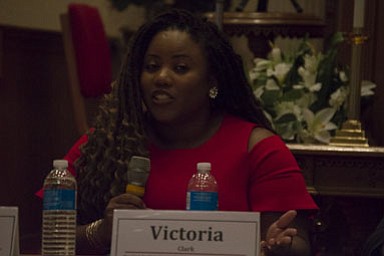 Alexandria — On a quiet Thursday evening, residents from as far as Manassas came to hear about the issues facing blacks living in Northern Virginia.

“One of the biggest obstacles faced by Black Upstart is teaching black folk how to see the value in their own communities,” said Kenzia Williams, founder of The Black upStart.

Williams was one of several panelists who spoke at The State of The Black Northern Virginia on Thursday, June 21 at Shiloh Baptist Church in Alexandria. The main issues discussed were entrepreneurship and business development and criminal justice reform.

The State of the Black Northern Virginia was the formed in 2008 from the Northern Virginia Urban League through a grant that would help empower African-Americans to get out to vote. The event was first held in 2012 as a way for leaders in the African American community to discuss issues while coming up with solutions.

The panel was divided into two sections sections. One included a panel of business owners and entrepreneurs, while the second panel include a lawyer and those involved in criminal justice reform.

There were multiple resources for blacks in the community interested in starting their own business. Ramunda Lark-Young, co-founder of Mahogany Books said she began her business 10 years ago in Old Town Alexandria before getting her own space a few months ago.

“For 10 years we used to have a bookstore up Duke Street,” said Lark- Young.

Williams also works for the United Negro College Fund. At UNCF she manages a group of college students by teaching them how to create jobs for themselves after they have graduated.

“It is not only teaching them self-sufficiency, but creating value for the community,” said Williams.

Williams noted that, even though she had a degree, it held a different value than the same degree white students were getting. “When I looked that paychek, it was not the same value as my counterparts,” she said.

Ken and Detra Moorman own a coffee house in Old Town Manassas called Jirani Coffeehouse. Detra Moorman said she and her husband have done a number of things in the community that helps the coffee shop to stand out from the rest.

“We are really more than your typical coffee shop,” she said. The coffee shop has open mic nights and they partner with local businesses in the community. They were the first cafe to partner with INOVA Health in which they held a baby cafe for moms who are breastfeeding.

The first panel also talked about some of the challenges they faced when they started their businesses. Ken Moorman said the biggest hurdle for him was fear. Lark-Young said that she shadowed the Moormans before she and her husband opened the book store.

“We shadowed them, we learned, we talked, they sat with us, they mentored us,” said Clark Young.

Keshaun R. Clark , vice president of National Capital Bank of Washington, said she mentors little black girls and tells them that they can be a black banker just like herself.

The criminal justice panel focused on criminal justice reform. Victoria R. Clark, president of the Northern Virginia Urban League Young Professionals Network and also an attorney, named four issues that contributed to issues with the justice system: Health, housing and education and jobs. People might think those four issues have no relation to each other but they do in terms of people released from prison needing housing or jobs, she said.

Traci DeShazor, Deputy Secretary of the Commonwealth of Virginia

Clark also said blacks don’t have access to information to be educated about what their rights are. She gave an example in what are their rights when blacks are pulled over by the police.

Kofi Annan, president of the Fairfax County NAACP, said people get caught up in the emotion but fail to understand the system and how to effect long-term change.

“Unless you go to the meetings and you actually take time to write letters and organize, you are really missing, a real large impact,” Annan said.

Traci J. DeShazor, deputy secretary of Commonwealth of Virginia, said one of the things her office focuses on is the restoration of rights of convicted felons. In Virginia, if a person commits a felony, he or she loses the right to vote.

DeShazor said her office has been working to get rights restored to felons who did not commit a non-violent crime. As of January of this year ,173 rights have been restored to individuals.

“Everyone is this power in this room can create change,” said Clark.