Burke Historical Society presents talk on once-vibrant communities that have since faded from view. 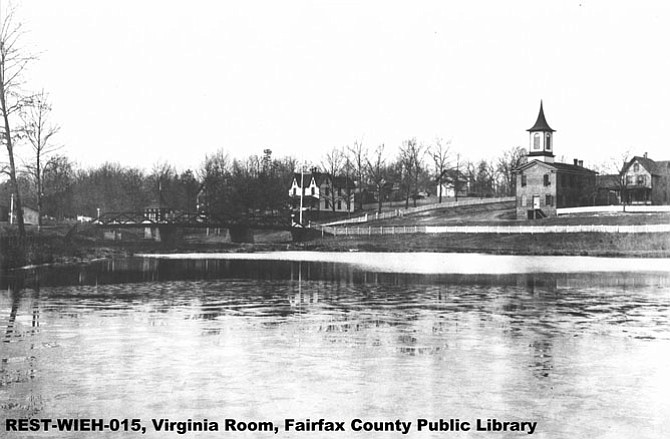 Wiehle: The Town of Wiehle about 1900. Contributed by the Virginia Room, Fairfax County Public Library 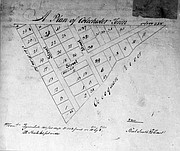 Contributed by the Library of Congress

The Pohick Regional Library was packed for the Burke Historical Society’s 45-minute talk on “Lost Towns of Fairfax County,” presented by Heather Bollinger of Aldie and Jeff Clark of Fair Oaks, on Sunday, Feb. 25, 2018. The focus was on once-vibrant communities that have since faded from view. The towns highlighted were Colchester, Matildaville, Dranesville, Union Mills, and Wiehle.

“A talk like this where we’re talking about the lost towns is an example of what I like to promote as history in Burke that is history hidden in plain sight,” said Jon Vrana, President of the Burke Historical Society. “There’s a lot of history around here that people drive past back and forth every day and don’t realize that they might be passing by the site of an old town or the bridge abutment for an old railroad like the Alexandria, Loudoun and Hampshire Railroad or Orange and Alexandria, or an old cotton mill down in Alexandria.”

Bollinger, who works as the Fairfax Circuit Court Historic Records Manager, started off by talking about Colchester. From 1750-1820, the town was located on the Occoquan River on the boundary of Prince William County where Old Colchester Road dead-ends into the Occoquan. It once was a bustling Colonial community; the George Mason III family operated a ferry there in the 1700s. Because of its proximity to Prince William County, it was intended to be the County Seat of Fairfax.

She said there were 42 lots and four streets; the ferry landing was at the foot of Essex Street, where the marina is today. There was a winery on Wine Street between Essex and Fairfax Streets. In the mid-1700s, it had active commercial enterprises – people sold flour, barley, rum, curtains, furniture and wigs. In 1762, a tobacco warehouse moved to Colchester from Occoquan. This is where the “Rolling Roads” come from. Today, Rolling Road and Route 286, the Fairfax County Parkway formerly called Walter Griffin’s Rolling Road, still exist. It was once a private rolling road dating back to 1742.

Six taverns operated in Colchester, which were crucial to the happiness and comfort of residents. There was The Colchester Inn and the Knight’s Inn. The one that still exists today is Fairfax Arms, now a private residence, which is the only surviving intact structure in Colchester.

The reason for Colchester’s decline tied in with it being a port town. During the Revolution, there was fear that British Naval ships would sail up the Occoquan and Potomac, and residents were afraid Colchester would be raided and burned. So, they moved away. The bridge washed out in an 1807 hurricane, and by 1815, some 95 percent of the town lots were delinquent. So, by 1820, buildings were left to decay.

Located in Great Falls, Bollinger said arguably that Matildaville (1790-1840) is the most forgotten lost town of Fairfax County. Authorized in 1790 by the General Assembly, it was chartered to support The Potomac Company, which was George Washington’s pet project to bypass Great Falls to get goods to Georgetown.

There are no known surviving plats of Matildaville. The streets were 40 feet wide and ran next to the C&O Canal. Lot 1 was the Superintendent’s House and a boarding house for the workers. After the Potomac Company folded, in 1845 Aunt Lucy Lee ran the boarding house. Matilda was the first wife of Light Horse Harry Lee. She passed away during the chartering process. During the time the canal was being built, Great Falls used to be called Matilda Falls.

Lot 4 was the Tavern Lot, where Dickey’s Tavern once stood. In 1797, the building functioned as a tavern. In 1854, William Dickey bought the tavern, and owned it until the 1930s. Teddy Roosevelt once visited Dickey’s Tavern where he had a chicken dinner. In the 1950s, the tavern was lost to fire.

Bollinger said that Matildaville’s legacy was it was tied to the success of the Canal and the Potomac Company, which turned out to be a failure – water levels limited the canal’s use to two months out of the year. In 1826, the Potomac Company had to fold. The Great Falls Manufacturing Company bought Matildaville in 1830s, and wanted to set up a mill town similar to Lowell, Mass. They chartered a new town called South Lowell in 1839, which repealed Matildaville’s charter, but this company failed. Over time, the Town of Potomac, formerly known as Matildaville was abandoned except for Dickey’s Tavern.

Next, Clark talked about Dranesville (1830-1910) located North of Herndon. The Fairfax County Public Schools television producer and director said Washington Drane opened a tavern, hotel, store and saloon in 1810, which he called Drane’s Tavern. Because it was a two-day trip from Leesburg to Alexandria by wagon, Drane’s Tavern was the halfway point where people could stop and spend the night, and it thrived from the 1840s to 1860s.

Dranesville was also the site of a small battle called The Affair at Dranesville, in December 1861. It was the first engagement in the Civil War when the Union Army actually won. There were a number of artifacts recovered there.

The Town of Dranesville reached its peak in the 19th century but it gradually declined in the 20th century. What killed it? Transportation when the W&OD Railroad line went in and roads in Fairfax County started being paved. So, commerce shifted to Herndon as businesses shuttered one by one. Today, there’s not a lot to see of what was originally Dranesville.

Next, Clark told the story of Union Mills (1810-1880) located at Popes Head Creek and Bull Run near Clifton, which predates the Town of Clifton. In 1809, a gentleman named John Hixon Dye built a mill dam complex on 90 acres near Clifton called Union Mills.

In the 1850s, the Orange and Alexandria Railroad was built with a station at Union Mills. During the Civil War, this became a hotbed because of all the fortifications in the area. After the Battle of Bull Run, the Union army started retreating when the Confederates pushed them back. The bridge got burned at Union Mills, got rebuilt, and burned again. All along Union Mill Road today, you can see remnants of the trenches and fortifications near the Balmoral neighborhood in Clifton.

Clark said the scars of the Civil War were too severe for people to survive. Two things became the death knell – the formation of Clifton when the post office moved there, and the mills started closing one after another. By 1912, the road networks changed and they favored the Town of Clifton. As far as structures of Union Mills, there is nothing left – but the name lives on with the Union Mills community in Clifton.

Bollinger said the town of Wiehle (1897-1923), which was close to Herndon, was very short-lived. The only reminders of Wiehle are the avenue name and the Metro station of the same name. After the Civil War, land speculators came to Northern Virginia to make their dreams come true with the idea that they were going to build new towns. Carl Adolph Max Wiehle, a German-born doctor, retired at age 35, and came to Northern Virginia with the idea that he would build a utopian city. He partnered with William Dunn (of Dunn Loring, 1887), and Wiehle named the city after himself.

Streets were named after major metropolises, such as Philadelphia, London, Paris, and Berlin. Both Dunn and Wiehle passed away by 1900, so they didn’t get to see their ideas come to fruition, so the town of Wiehle was never developed. All that got built was the town center; they never dug any streets. It became known as Sunset Hills Farm.

There was a whiskey distillery that opened called Bowman Distillery in the former town hall, which is the only building in Wiehle that remains today. It’s on the National Register of Historic Places but it’s not in great shape.