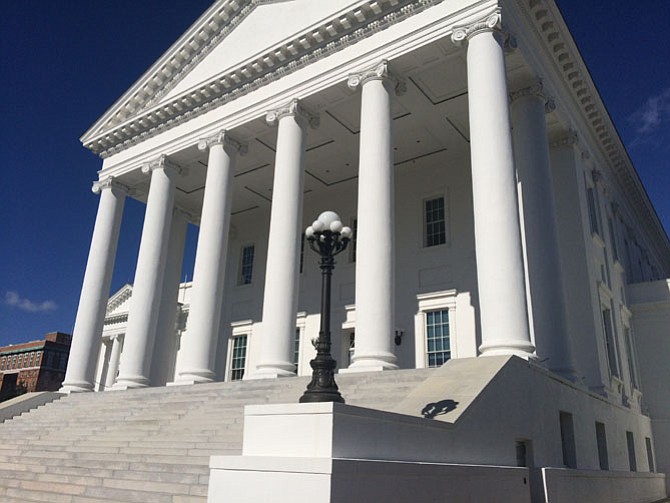 House and Senate leaders are deadlocked over the budget, a debate that expected to unfold over the next few weeks as budget conferees hash out the details. Photo by Michael Lee Pope.

Budget showdowns are rare in Virginia, but not unprecedented. Back in 2004, Gov. Mark Warner clashed with Republicans over a sales tax increase. Then in 2014, Gov. Terry McAuliffe engaged in brinkmanship over expanding Medicaid. Now lawmakers are poised to end the session once again without passing a budget. The final deadline for reaching an agreement is the end of June, when the new fiscal year begins.

“Looking at past budget standoffs, this one surpasses anything I’ve seen,” said Del. Ken Plum (D-36), the longest serving member of the House. “The issues are so big in terms of the number difference, but also in terms of philosophical differences in how we might put programs together.”

After experiencing an earthquake election last year, House Republicans changed course on expanding Medicaid. Their budget has $371 million in new revenue from the federal government under the Affordable Care Act. Senate Republicans remain steadfastly opposed to expanding Medicaid. So far, only one Senate Republican has sided with Democrats, Sen. Emmett Hanger (R-24), although he’s opposed to the hospital bed tax that would fund the part of Medicaid expansion not funded by the federal government. That means conferees from the House and Senate will spend the next few weeks hashing it out.

“The House conferees all voted for the House budget, and they all support Medicaid expansion. The Senate conferees are mixed,” said Barbara Favola (D-31). “Right now I don’t see a clear pathway for them unless they are identifying some particular incentives that they want Governor Northam to consider.”

IF PAST IS PROLOGUE, the next few weeks will see some dramatic new development that will shift the discussion. Back in 2004, lawmakers left town at loggerheads over a sales tax increase. The Senate supported the idea, but the House resisted it. After weeks of negotiation, several key Republicans flipped and eventually supported the idea, giving Warner and the Democrats a major victory.

“This has been the most trying time that’s ever been in my political career,” said House Appropriations Chairman Vince Callahan (R-34) during the 2004 negotiations. “Hopefully we’ll go to the middle of June, and we’ll have it all wrapped up and I can enjoy my life again.”

The budget standoff of 2014 didn’t play out quite so swimmingly for Democrats. McAuliffe was ending his first General Assembly session as governor, and he was pushing hard for Medicaid expansion. House and Senate leaders were deep in negotiations when Sen. Phil Puckett (D-38) unexpectedly announced his resignation, giving Republicans control of the chamber. Democrats cried fowl, charging that Republicans had offered Puckett a seat on the Tobacco Commission and proposed his daughter get a judicial appointment. Nevertheless, Republicans successfully blocked Medicaid expansion.

“The momentum is different now,” said Sen. Chap Petersen (D-34). “When McAuliffe was governor, Obama was still president and there was still a lot of fear that the ACA was not a long-term program and once Obama was gone it would go away. I think even the most ardent conservatives would have to concede at this point that the ACA is here to stay.”

BRIDGING THE DIVIDE between the House budget and the Senate budget won’t be easy. Aside from the ideological differences on the Affordable Care Act, the two budgets have a long list of differences. The Senate budget includes $5 million for home health care; the House budget has $1 million to train personal care attendants. The House spends $46 million for financial aid to in-state undergraduate students; the Senate slashes that in half to $23 million. The House invests $88 million in a 2 percent raise for teachers; the Senate budget has no money for teacher raises.

“When we don’t pass a budget, all 130 local governments around the state start screaming at us,” said Sen. Scott Surovell (D-36) “They can’t plan their budgets — especially their school budgets — until they know how much money allocation they’re going to get from us for their direct aid.”

For now, local governments across Virginia will have to live with uncertainty. Most House members and senators believe lawmakers will leave town without passing a budget, leaving it to the conferees to has out the details. A resolution could emerge as early as April or as late as June, although the possibility still exists that a last-minute fix could emerge. Del. Tim Hugo (R-40), who voted against the budget, predicts a solution will happen before lawmakers leave town on Saturday.

“I’m always the optimist,” said Hugo when asked for a prediction. "But if I’m wrong, I’m sure you’ll tell me.”