Recommends a rise in the real-estate tax rate. 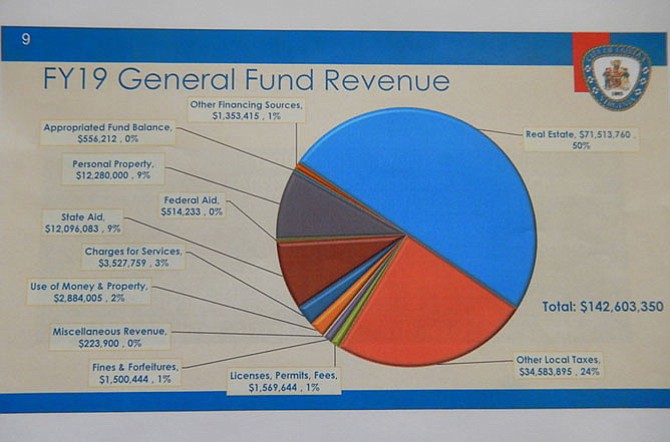 “This budget is conservative in its spending proposals and requests for additional resources.” – Fairfax City Manager Bob Sisson

The Budget Review Schedule is as follows:

April 10: Introduction of rates for commercial and industrial property tax and wastewater tax;

The proposal would increase the real-estate tax rate from $1.06 per $100 assessed valuation to $1.0825. If approved, it would mean the owner of a home valued at $523,915, for example, would pay $143 more a year in property taxes. The average residential tax bill would increase 2.6 percent.

Still, said Sisson, “The City of Fairfax is truly a good value for residents.” And since the real-estate tax yields 50 percent of City of Fairfax’s General Fund revenue, he said the money’s needed to keep providing the quality of life citizens here enjoy.

He explained the many factors informing the preparation of this budget, including the desire to maintain the City’s AAA bond rating. And he said budget savings in FY ’17 and ’18 were used to help balance the FY ’19 budget.

SISSON also faced a slew of challenges, especially the fact that 60 percent of the General Fund budget must go to non-discretionary expenses, over which the City has no control. These are non-negotiable items for certain services and contracts, such as the school contract with FCPS, debt obligations, pension benefits, and fixed costs including debt payments for capital improvements.

“We’re at about $133 million worth of debt right now,” he said. “It won’t be until 2024 ‘til we get a significant stepdown on our debt repayment.” However, on the positive side, Sisson noted that, in calendar years 2018 and ’19, “We should have a healthy amount of new construction. We’ve forecast over $100 million of new construction in the community this year.”

The largest General Fund expenditure – $56.2 million, or 39 percent – is for education, although it’s less than last year. “It’s our fourth year of having less students than the year before,” said Sisson.

The budget contains a 3.5-percent merit pay raise for eligible City employees. But, said Sisson, “There’s no COLA [cost of living adjustment] in this budget. We felt that we didn’t have sufficient revenue to recommend that. Employee financial compensation will continue to be a challenge, and it’s always a high priority in this community.”

Regarding the recruitment and retention of public safety personnel, he said it’s a problem in many jurisdictions, including Fairfax, and “It’s a significant concern.” So this budget does recommend applying a 2.6-percent market adjustment to employee pay scales to retain parity within the region.

A 1-cent increase in the Commercial and Industrial (C&I) real-estate tax is requested. This would take it from 10.5 cents to 11.5 cents per $100 assessed valuation. Also recommended is a wastewater utility rate hike of 10 percent to support the City’s share of capital project costs required for the Noman Cole Wastewater Treatment Plant.

In addition, the budget dedicates 50 cents more from the real-estate tax rate for the Stormwater Fund. The money will be used to improve the City’s aging infrastructure, as well as meet federal and state regulations regarding stormwater management.

Sisson also recommends a transportation tax fund rate increase from 10.5 cents to 11.5 cents for commercial and industrial properties. This rate would then be $1.1975 per $100 assessed valuation. All residential properties are excluded from this tax.

The money is used solely for transportation and transit purposes and enables the City to quality for matching funds for various transportation projects. And, said Sisson, “It’s been so refreshing to see transportation funds coming into the City as a result of this, plus the grants and state and federal money we’ve been able to obtain.”

Overall, he said, “This budget is conservative in its spending proposals and requests for additional resources.” But at the same time, it helps the City advance its goals by taking actions including:

Taking the environmental sustainability employee from half to full time; moving its multimodal transportation program forward; providing additional resources for the City’s economic development program for business recruitment and retention; and establishing a reorganized, citywide communications and marketing function.

“Economic development is the top item for both our positives and challenges,” explained Sisson. “Our Economic Development Office is trying to develop an aggressive program, but several commercial properties are depreciating in value. But as new developments are completed and our infrastructure work finishes, it’ll attract more people to the City.”

TOWARD THAT END, the budget also supports the redevelopment of several, large-scale, residential and mixed-use projects expected to yield enhanced commercial and retail growth, as well as a greater diversity in housing options. And it recommends making the Human Services director a full-time position, instead of half time, to strengthen the administration of the City’s complex, health-and-human-services contracts and better meet the needs of the people using those services.

At the end of his presentation, Sisson thanked Finance Director David Hodgkins, Budget Manager Kerry Kidd and City Clerk Melanie Crowder for their “around-the-clock work” that went into it. Mayor David Meyer then noted that the Council will go through the budget in great detail and discuss it at upcoming work sessions and that the public will have “ample opportunities” to comment on it.