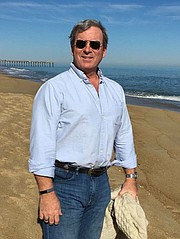 Retired Alexandria Police Lieutenant Mark Bergin is revealing how the badge shapes a police officer’s life. His debut novel, “Apprehension,” tells the story of Police Detective John Kelly, a modern-day police officer not so different from Bergin himself.

After retiring from a 28-year career serving the Alexandria City Police Department, Bergin wrote “Apprehension” to bring light to an important issue within the police community: police suicides.

“I decided writing the book I’d had in my head for years,” Bergin said. “I’d had about nine pages of notes for quite some time — the beginning, middle and end scenes planned, so I just started expanding on that. It was all about figuring out what John Kelly would go through to get to the next point. Ultimately, the book became a way for me to talk about topics that I felt were important enough to address.”

After suffering two unforeseen massive heart attacks, Bergin changed the direction of his novel, which was originally going to focus more specifically on a scenario based on his own experience combatting drug-related crimes. It was this near-death experience that gave him a deeper perspective on life-and-death matters.

“I had a two heart attacks during a family beach vacation,” Bergin recalled. “The first heart attack happened on a Saturday morning, and I had my operation on a Thursday. I was in three different hospitals, in and out of Intensive Care Units, and every time a new nurse took over and I explained what I was in for, their eyes would get really wide and say, ‘That’s the widowmaker.’”

The widowmaker, he added, is a reference to the kind of heart attack he had: the complete closure of the left anterior descending (LAD) coronary artery.

“After finding out, one nurse put her hand on his shoulder and said, ‘You shouldn’t be here, God’s got something more for you to do,’” Bergin said. “That really struck me. I thought about it for weeks and weeks. Then when I decided to write the book, I thought, ‘is there more I can do with the original plot I had in mind?’ Originally it was about a cop under a lot of stress, but now the stress my hero is going through is the kind that can push someone toward suicide.”

Bergin is not only raising awareness of mental health in the police community. He will also be raising money for this cause.

“I’m going to donate 20 percent of my profit from selling the book to programs that combat police suicide,” said Bergin, a two-time Officer of the Year for drug and robbery investigations. “There are far more suicides among law enforcement than there are police being killed in the line of duty, so I’m determined to help programs that help cops in distress. I approached them to see if they can be my partner in this effort.”

According to one such organization, Blue H.E.L.P. — a nonprofit started to reduce the mental health stigma and to support those suffering in the law enforcement community — there were 154 suicides among police officers in 2017 alone. This statistic does not reflect suicide attempts, either. As of February, there were already 18 police suicides in 2018.

“To put this number into perspective, there were 133 total Line of Duty deaths in law enforcement last year,” Bergin said, quoting statistics collected by Operation Officer Down, a nonprofit organization devoted to memorializing fallen officers. “I know that in my 28 years on the beat, I saw one fellow officer murdered, shot to death in a drug-related standoff in 1989. In that period in which one Alexandria police officer was murdered, there were three officers and two sheriff's deputies who killed themselves. People don’t know this. We don’t talk about this as police departments. Sometimes it’s unnecessary embarrassment and sometimes it’s trying to preserve the privacy of the victim’s family, but mostly it’s trying to save reputation because there is still a stigma.”

He added that although mental help is available, it doesn’t usually seem all that accessible to police officers.

“There is so much PTSD, but so much of our training is geared toward avoiding the pursuit of help,” he said. “We need help for our officers to become more readily available. Although it’s been written about before, it hasn’t been enough, so I’m writing about it now. I’m hoping to do a book tour, maybe going to police stations to do readings so that police officers become more familiar with the idea that they aren’t alone.”

Although Bergin never considered suicide, he said it would be hard to fathom a cop that has never struggled, even if silently.

“It’s something we all encounter, and something we all know happens,” Bergin said. “Most cops think that they’ll never get pushed to the point of suicide, but I talked to a retired officer who is now teaching and lecturing on the topic, and he said that just the thought of suicide is a pressure relief valve to many cops under pressure.”

Bergin attributes this to the process by which every cop becomes a cop.

“Every moment you’re out there, you’re looking at people and thinking, ‘Are you a threat?’” Bergin said. “And then, if there is a threat, you think, ‘what can I do?’ You see a tree as cover if there is gunfire. Can you see a potential perpetrator’s hands, or could he be concealing a gun? It becomes second nature, common, constant. You always operate with that hyper vigilance. The thought of violence puts a lot of pressure on us.”

Bergin’s wife and children were never completely at ease, either.

“I have always been proud of Mark, then and now,” said Ruth Sharpe Bergin, Mark’s wife. “It's such a worthy profession. I knew Mark in a professional work capacity before we dated, so I knew how good he was at what he did. My trust in his skills kept my fears at bay. However, I always made sure to say ‘be safe’ as he left for work, as both a request to him and a prayer to God.”

She is also proud of what her husband is now doing in his retirement.

“I'm glad he's writing about police work and the stress officers face,” she said. “They are tough men and women, but they are human. The mental health stigma is not by any means limited to police work. It's a societal issue. We are making progress as a country, but have far to go. Mark's book is a step in the right direction.”

Despite the weight on his shoulders for all those years serving Alexandria, Bergin said it was in his blood to become a cop. His interest in law enforcement was actually first piqued when he was a young reporter for The Alexandria Gazette.

“I started working for the Gazette in October of 1983,” Bergin said. “As the cops and courts reporter for both Alexandria and Fairfax, every day I would go to police headquarters and see if anything interesting happened: anything breaking, any newsworthy court activity. I had a police scanner and a camera. If there had been a shooting, murder, bank robbery or fire, I’d be there to take pictures and then write the story.”

Reporting on police activity wasn’t enough to satiate him, though – not even when he won the 1985 Virginia Press Award for General News Reporting.

“Coming to Alexandria, getting to know officers firsthand, riding in the police cars, and covering testimony at trial, I figured out they were good and normal people and I wanted to be among them,” he said.

Providing hope and relief to existing officers is his ultimate goal.

“My heart stopped twice in one day and I survived,” he said. “I’m the luckiest man alive. People will tell you a retired cop can never stop working. That’s true. And now I have the time to pursue a lifelong dream.”

To order a copy of “Apprehension,” which will be available in the fall of 2018, visit www.inkshares.com/books/apprehension.