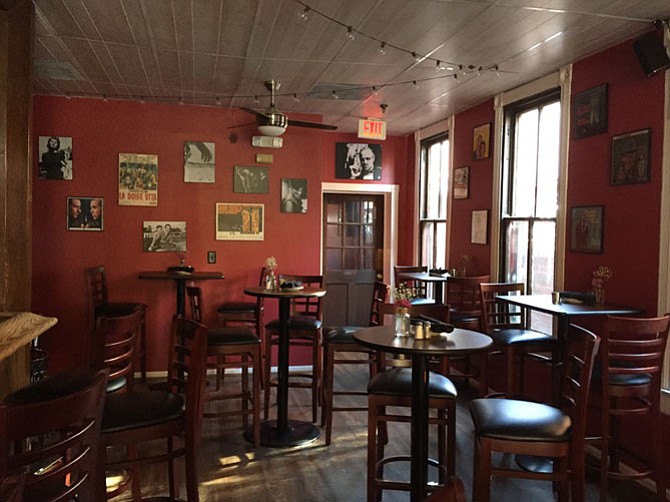 La Trattoria’s bar area has seen some renovations that have given the room a more airy look.

Sometimes, all it takes to infuse an Alexandria institution with new energy is just a little TLC.

At least, that was the case for La Trattoria, the new butterfly emerging from the cocoon of the venerable Trattoria da Franco, one of Old Town’s most historic and beloved Italian eateries. Blending modernization with the Trattoria’s existing old-world charm, owner Michael Strutton aims to preserve the historic while propelling into the future of Alexandria dining.

But then, Strutton was a loyal patron of Franco Abbruzezetti’s creation in the first place. And he thought he knew how to resurrect an establishment that might have seen better days.

“I’ve been coming here for years as a customer; pretty much every Saturday night I came here for probably five years. I’m extremely involved in my Italian culture, so this was to me in Old Town as close as I could get to that as far as food, and just a vintage experience which I appreciate more than trendy or ‘fad’ type dining,” he said. “I knew that Franco had ideas of retiring or selling, and I knew that this place was underperforming and really needed an injection of energy and vision …and so it was just always on my mind.”

When Abbruzezetti did list the restaurant with a broker, Strutton made his intentions known. And after months of negotiation and legalities, La Trattoria emerged in its new form.

The first thing you’ll notice about the restaurant nowadays is its curb appeal. Strutton and his team renovated the patio right away, hoping to take advantage of the waning warm days when summer turned to fall and then to colder climes still. Then they turned their attention to the dining room and bar — where there were some decisions to be made.

“Our initial vision was to make (the dining room) more of a pizzeria and (the bar) to be a more formal dining room,” he said. But impending popularity soon nixed those plans.

“We were just so full, we were overfilling into the other room, and even more than that, long waits and turning people away,” he said. “And we just sat down and decided that the pizzeria had to go. We just had too much demand for finer dining.”

Take a lap through the bar area and it’s easy to see the facelifts that have gone into brightening the room. The shelving unit behind the bar is gone, revealing exposed brick, and the wine storage to one side of the area was removed to display a window that many patrons never knew existed. The now-formal dining room has received a fresh look, as well, maintaining its elegance with a fresh coat of paint.

But what diners are really there for is the food, and Strutton beams when discussing it. Rather than focusing on European Italian cuisine, Strutton aimed for the restaurant to pivot more towards an Italian-American cultural focus.

“I think most of the restaurants in this town are European-style Italian, and they’re a different culture. I don’t speak Italian, I’ve never been to Italy – but I have been to Brooklyn,” he laughed. “I’m from New Jersey, my family’s from New York, so this is an entirely different culture. Even the language is different.”

Along with upping the ante in the ambiance department, La Trattoria’s menu has also been brought up to modern dining standards.

“We elevated the ingredients for every single dish,” Strutton said. When it comes to Parmesan, “we buy a wheel of grana padano and we shred it. …The average customer probably doesn’t even recognize its difference, but to me it’s an important part.”

So, too, has the sauce seen a bit of a change.

“This is my family recipe sauce. ...To me it’s a process of building something; using really good tomatoes are essential. Cost is really high for those things but it’s so worth it,” Strutton said.

La Trattoria’s rebirth has brought with it a great many changes, of course, but Strutton aims to keep diners coming back with hints of the old blended with new ideas. While that can be a difficult balance with longtime regulars, Strutton says he wants to make it work.

“We still have a lot of regulars and it’s a tricky thing, easing them into the new brand and concept without them feeling like they’ve been left behind. It’s not the same place. You walk in, it’s totally different,” he said. “But it is the same in that …I’m here every night, the same people make the food, the concept, the charm is still here.”