Making a Difference in Mount Vernon 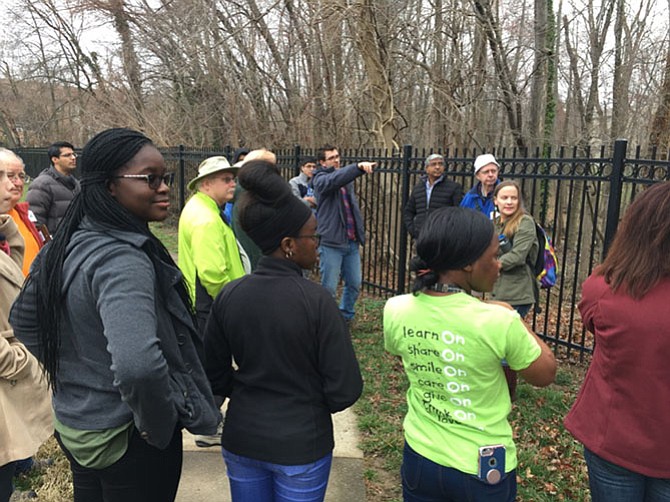 Lee District Supervisor Jeff McKay applauded the work of the group and said, “This is exactly the right time to be in this part of the county.”

A group of teens, who received county awards for their regular grounds and stream cleanups around their Stony Brook apartments and Little Hunting Creek, were featured in a “walking tour and forum series” event of the Coalition for Smarter Growth last month. The nonprofit coalition sponsors educational events and works in the metro area to help plan for growth that is green and transit-centered.

In the community room of Stony Brook Apartments at 3600 Buckman Road, Stewart Schwartz, executive director of the coalition, Monica Billinger of the Audubon Naturalist Society, and others gave presentations on how the planned EMBARK development along Route 1 may influence stormwater management in Hybla Valley.

Schwartz saw EMBARK as an exciting chance to right some of the wrongs of development of the 1950s that paved over huge areas for parking lots and channeled streams to carry flood water to the river as fast as possible, gouging themselves out and removing all life forms.

New trends in development allow runoff water to soak back into the ground through green surfaces, holding ponds, and meandering streams before reaching the river. Billinger stressed the importance of neighborhoods’ understanding the water cycle and acting to keep water clean through rain capture, stream cleanup, green spaces, and other environmental actions.

Five of the dozen or so teens from the apartments who have participated in about 10 stream cleanups attended the meeting and told the community leaders who attended why they helped out.

The teen group is led by Ryan Barton, manager of community impact strategies for Community Preservation and Development Corporation, which owns the 204 apartments. The apartments sport solar panels on the roofs and rain barrels at the drainpipes. The grounds are litter-free, thanks in part to the students suggesting trash cans near the mailboxes.

Little Hunting Creek originates on the east side of Route 1 and runs behind Walmart, Costco and Audubon Mobile Home Park, then turns east runs through large residential developments such as Creekside, Sequoia, and Stoney Creek. It parallels Buckman Road and flows back under Route 1 where it widens and flows through residential areas to enter the Potomac River at Riverside Park. Barton and Billinger stressed the importance of the involvement of communities, especially youth, in protecting streams as they flow through neighborhoods.

Various civic leaders, some from the downstream areas of the creek, attended the briefing. They were joined by Lee District Supervisor Jeff McKay on the grounds along the creek, which is fenced off from most apartment property.

Asked why they participated in cleanups, the teens — three girls and two boys — gave the first reason as “he [Barton] gives us food” — pizza to be exact. But Barton noted that the teens kept working many hours after the pizza was finished.

“At first I didn’t want to touch those dirty things,” said Stephanie Agyemang-Manu, “but now I find clean- up relaxing — sort of therapeutic.” Racheal Appiah said she just wanted to help out her community. Carmela Dangale said she was still getting used to it but feels like she is helping out.

Barton, who works full-time at Stony Brook, is now also working with CPDCs other properties to expand youth volunteer opportunities in locations such as Southeast, D.C.; Reston, Va.; and Silver Spring, Md.

“People are listening to young people, these days,” McKay said. “When our community was built here there were no environmental standards and most of the problems we see are a result of that. As the area redevelops with EMBARK, this is exactly the right time to be in this part of the county. We are focusing on all positive things.”