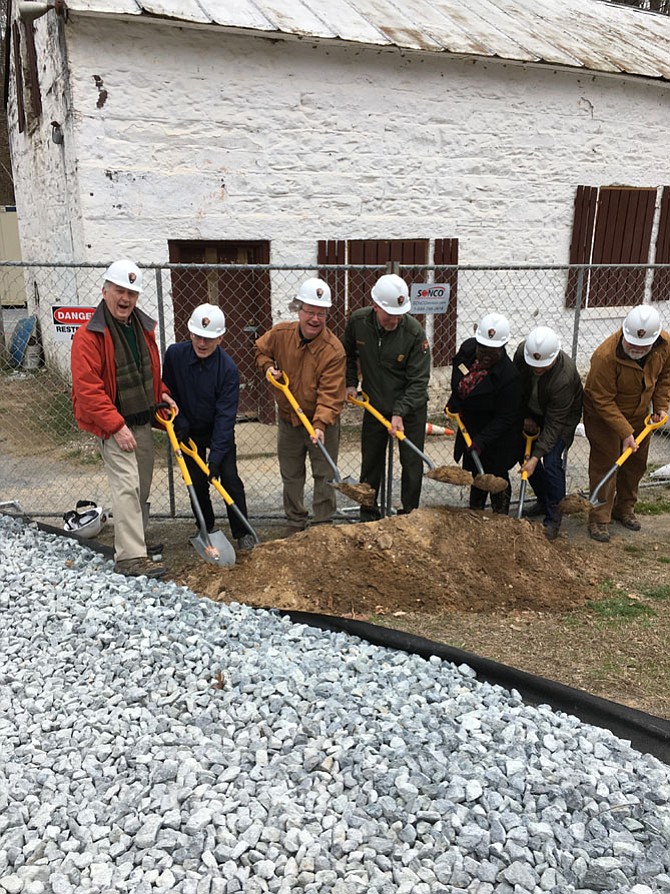 C&O Canal National Historical Park officials, friends and guests participate in ground-breaking ceremonies at Swain’s Lock west of Potomac. The lockhouse at Swain’s will be renovated for use in the Canal Quarters Program and as a base for the Canal Classrooms Program. Photo by Peggy McEwan/The Almanac 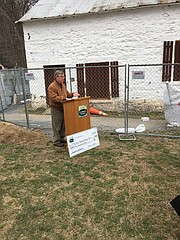 Bert Swain speaks at the groundbreaking for the restoration of his family home at Swain’s Lock on the C&O Canal Saturday. The lock house will join six other lock houses in the Canal Quarters program and will also serve as a Canal Classrooms base.

Bert Swain and his cousin Tobe Butt grew up in Lockhouse 21 on the C&O Canal.

Both were at the Lockhouse again Saturday, March 17, for the official groundbreaking for the rehabilitation of their childhood home, one that was in their family for close to 100 years.

The small white house at Swain’s Lock, off River Road west of Potomac Village, will become the seventh house of the Canal Quarters, a program of the nonprofit C&O Canal Trust. Canal Quarters are renovated lockhouses available to rent for overnight stays. Each tells a story of a particular period of Canal history.

Swains Lockhouse will interpret 1916, the time when the canal was transitioning from an east-west transportation route to a recreational space for the public, according to Heidi Glatfelter Schlag, director of marketing and communications for the Trust.

“I think [this is] phenomenal,” Bert Swain, who is a member of the C&O Canal Trust Board, said on Saturday. “It was our hope that it would be used again by the community.”

Swain said he lived in the house from the time he was born in the 1950s until he left in the ‘80s.

The house was originally constructed in the 1830s, just after the Canal opened for traffic in 1831.

“Swain family members can be traced back to the original construction of the canal,” according to the Canal Trust website. And they stayed. Jesse Swain was lockkeeper when the canal closed in 1924.

Descendants continued to live in the house until 2006, when they turned it over to the National Park Service.

Electricity was put in the house in the 1950s and, about 10 years after that, the family gave up the wood stove which was used for heating and the cooking and added oil heat, Swain said.

He told the group gathered in front of the house for the groundbreaking, “We are standing on the spot where, on some occasions, we would have Thanksgiving dinner.”

Bonnie Butt, Tobe’s wife, said her husband was born in the house in 1941 and lived and worked there.

The Swain family ran a concession stand and boat rental from the lockhouse, until 2006.

As for growing up along the canal, Tobe Butt said it was fun.

“The boys at school used to envy me,” he said. “I got to hunt all winter and swim and canoe all summer … of course there was work, especially in spring when we were getting the boats ready.”

Swains Lockhouse will be unique among the Canal Quarters in that it will be the first multi-purpose lockhouse, due to its larger size thanks to an 1890s expansion. The entire building will be available for overnight stays through the Canal Quarters program, with accommodations for up to eight guests. The newer part of the building will also be used for the Canal Classrooms program on weekdays. Students on educational trips to the park will be able to participate in learning activities in the space, only steps away from the canal, Lock 21, and the Potomac River, according to a Canal Quarters press release.

“We are very pleased to be embarking on this rehabilitation project with the C&O Canal National Historical Park,” said Michael Mitchell, chairman of the board for the C&O Canal Trust, said. “That it will further both the Canal Quarters and Canal Classrooms programs. These two programs are so important to our mission. The Swains project will allow us to enlarge our award-winning Canal Quarters program, as well as establish a central base in the Park for Canal Classrooms programming.”

The Lockhouse will feature electricity and running water when it opens as a Canal Quarters lockhouse in the Fall. For more information visit www.canaltrust.org.