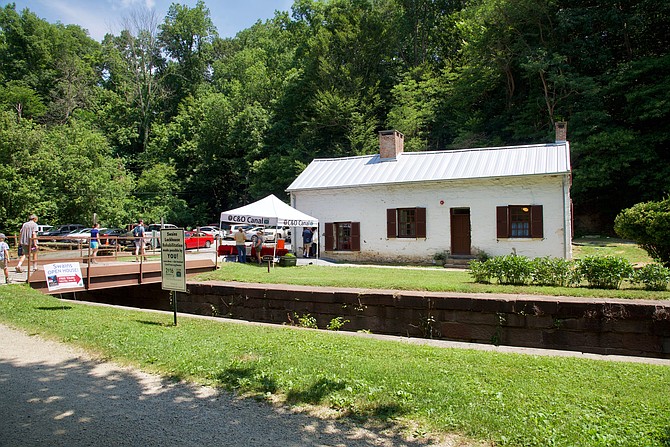 Swains Lockhouse was open to the public this past weekend, and will be open for overnight guests by reservation. Swains Lock is two miles up the towpath from Great Falls Tavern. Photo by Peggy McEwan 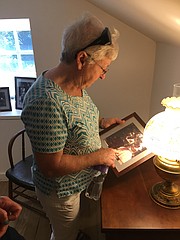 Barbara Swain Raver, who grew up in Swains Lockhouse, looks at a picture of family members at the open house Friday. The house will be open for overnight guests by reservation. Swains Lock is two miles up the towpath from Great Falls Tavern. 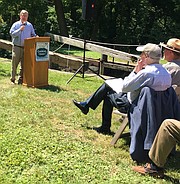 Bert Swain, who grew up in the lockhouse at Swains Lock and is now a member of the board of directors of the C&O Canal Trust, speaks at the ribbon cutting ceremony Friday marking the completion of refurbishing the lockhouse.

The furnished dining room of the Swains Lockhouse.

A formal ribbon-cutting ceremony Friday marked the opening of the Lockhouse at Swains Lock on the C&O Canal National Historical Park.

In addition to National Park employees, local politicians and volunteers who helped make the refurbishing of the Lockhouse a reality, members of the Swain family, who lived in the Lockhouse, attended the ceremony and open house that followed.

Barbara Swain Raver, who now lives in Damascus, was there. She was born in the Lockhouse as was her brother Bert, a member of the board of the C&O Canal Trust, which will operate the Lockhouse as one of its Canal Quarters properties, and cousin, Charlie Butt.

Raver said she was nervous about seeing the house, wondering how it would be changed, but she was glad it was taken over and renovated by the Trust.

“It was making me sad from 2006 [when the family turned the house over to the National Park Service] until they started doing something to [the house],” Raver said. “It was deteriorating and that was [sad] because my dad and brothers kept it up. It meant a lot to them to whitewash it every spring.”

Wandering through the house, Raver pointed out the upstairs bedroom where her parents slept, told a story about her grandfather Jessie Swain and his pet goose, Jimmy, and pointed to a picture of herself dressed for her high school prom.

Charlie Butt said he was born in the middle room on the first floor. He said they fixed up the downstairs storage room to be used as a bedroom after his grandfather had a heart attack and could not use the stairs.

That was 1952, the year they put electricity in the house, he said.

The history of the Swain family is closely tied to the C&O Canal.

John Swain helped build the canal in the 1830s, family members worked on canal boats, then as lock keepers of Lock 21, which became known as Swain’s Lock. The house was built in 1830. Jessie Swain was the last lock keeper in 1924 when the canal closed to boat traffic. After that, the family opened a concession stand, renting boats and bikes to park visitors and selling ice cream and live bait.

The Swains lived in and maintained the house until 2006 when they turned it over to the National Park Service, C&O Canal National Historical Park.

Swains Lock is just over two miles west of Potomac Village. As one of the C&O Canal Trust’s Canal Quarters, it is convenient for an overnight stay and a historic experience for residents or their guests.

It is one of seven lockhouses in the Canal Quarters program, allowing guests to stay up to three nights in the lockhouses, experiencing life along the canal.

Each lockhouse provides visitors with an interpretive theme and is furnished with period furniture according to its specific time period.

The house has heating and air conditioning, indoor plumbing and is ADA-accessible, the first of the Canal Quarters to reach that designation.

The Lockhouse sleeps eight people and is available for overnight stays for $180/night plus fees. For more information visit www.canaltrust.org/quarters.