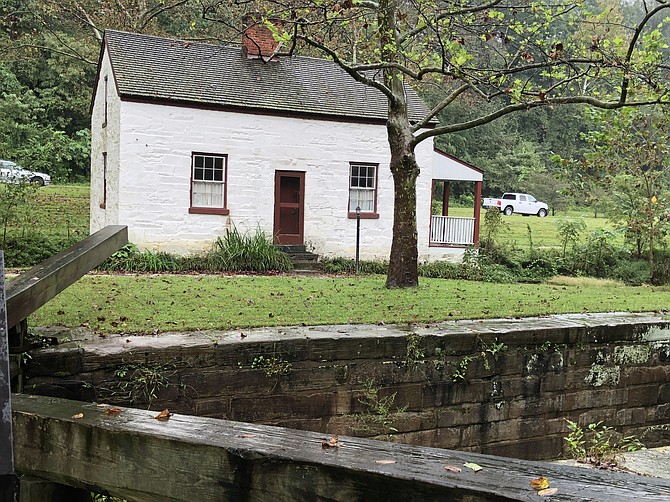 Lockhouse 6 and the canal.

Swains Lockhouse was open to the public for its grand opening last year, and now is open for overnight guests by reservation. Swains Lock is two miles up the towpath from Great Falls Tavern. The restoration won an award last week.

C&O Canal Association was honored at the 2020 Maryland Preservation Awards Thursday night at the Miller Senate Office Building in Annapolis. The Association shared in the award the restoration of Swains Lockhouse.

C&O Canal Trust led the restoration effort and was recognized for Project Excellence in Preservation Partnerships. The Association, the Friends of Historic Great Falls Tavern, and the C&O Canal National Historical Park shared in the award. The ceremony included a short video about the project, https://youtu.be/6kMYw1T56-Y.

AWARD: C&O Canal Trust, Inc. for Swains Lockhouse (Montgomery County) – Swains Lockhouse was occupied continuously by the Swain family for more than 100 years. Restoration of the Lockhouse brings this legacy to life and serves an important role in interpreting the story of the C & O Canal as a critical artery of commerce early in the 19th century as the nation expanded westward. The C&O Canal Trust opens the Lockhouse to the public as part of the Canal Quarters program.

The C&O Canal Trust received the Project Excellence Award for Preservation Partnerships for the Swains Lockhouse project. This recognition came from the Maryland Historical Trust at their Annual Maryland Preservation Awards banquet. Congratulatory resolutions came from from the Maryland Senate and Senator George Edwards, and the Delegates representing District 16 in Montgomery County. New Park Superintendent Tina Cappetta joined the celebration on only her third day of work. Also joining in, Bill Holdsworth of the C&O Canal Association and Don Harrison of the Friends of the Historic Great Falls Tavern.

The C&O Canal National Historical Park was also recognized at the awards ceremony for Outstanding Stewardship by a Government Agency for the Conococheague Aqueduct project.

The Maryland Preservation Awards, presented annually by the Board of Trustees of the Maryland Historical Trust, are the highest level of recognition for historic preservation, heritage education and community development projects in the state.

The history of the Swain family is closely tied to the C&O Canal.

John Swain helped build the canal in the 1830s, family members worked on canal boats, then as lock keepers of Lock 21, which became known as Swain’s Lock. The house was built in 1830. Jessie Swain was the last lock keeper in 1924 when the canal closed to boat traffic. After that, the family opened a concession stand, renting boats and bikes to park visitors and selling ice cream and live bait.

The Swains lived in and maintained the house until 2006 when they turned it over to the National Park Service, C&O Canal National Historical Park.

Swains Lock is just over two miles west of Potomac Village. As one of the C&O Canal Trust’s Canal Quarters, it is convenient for an overnight stay and a historic experience for residents or their guests.

It is one of seven lockhouses in the Canal Quarters program, allowing guests to stay up to three nights in the lockhouses, experiencing life along the canal.

Each lockhouse provides visitors with an interpretive theme and is furnished with period furniture according to its specific time period.

The house has heating and air conditioning, indoor plumbing and is ADA-accessible, the first of the Canal Quarters to reach that designation. The Lockhouse sleeps eight people and is available for overnight stays for $180/night plus fees. For more information visit www.canaltrust.org/quarters.