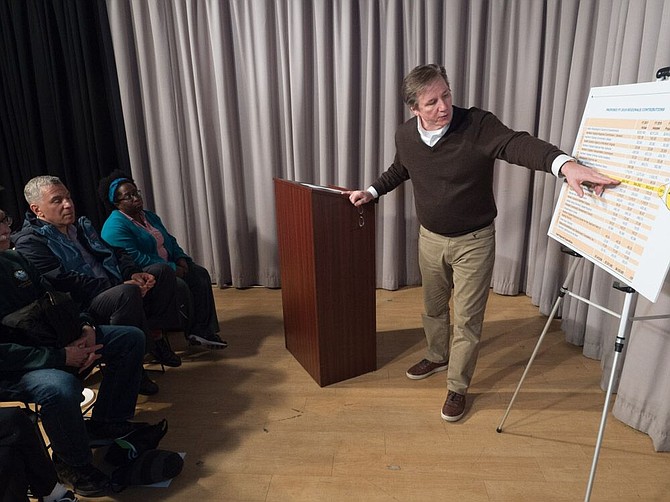 People who want to show their support for Arlington Independent Media are encouraged to write to the County Board at countyboard@arlin.... AIM also has an online petition asking for its full funding to be restored; that can be found at https://www.chang...">https://www.chang.... There’s also a budget hearing scheduled for Tuesday, April 3, at 7 p.m. at the Arlington County offices where the public will have a chance to speak. More information about AIM, including details on the budget cut, is available at https://www.arlin...">https://www.arlin....

Tucked into a corner off Wilson Boulevard, behind the Comcast office and mostly out of view from shoppers and commuters, Arlington Independent Media has been a mainstay of the community for more than 30 years.

People take classes in video and audio production and the organization hosts camps during breaks from school, teaching kids how to make movies.

AIM has long had a running partnership both with the county and with Comcast, but cable revenues have decreased, which means the communication taxes collected by the county have decreased. Last year, the total contribution was about 5 percent less, said Paul LeValley, AIM’s executive director. With this as the anticipated new normal, AIM has been notified to expect a similar 5 percent reduction each year for the next four years.

In addition to the county funding, AIM accepts donations and pledges and charges membership fees, ranging from $25 for a basic membership to a $680 per year organizational membership good for up to 12 individuals. There are also fees for the classes and camps conducted by AIM throughout the year; classes range from the $20 introduction to community media seminar required of all new producers to several master-level classes at $300 each.

Each year, AIM raises about $405,595 through these fees, but the organization operates “very lean and efficient,” LeValley said, with each television production staffed by volunteers. “Due to previous budget cuts, we’ve already reduced our staff, cut back hours and raised our fees.”

LeValley said the budget cuts were announced “with no warning and no suggestions as to what we ought to do to cope with it. AIM has, however, made a proposal to the county whereby we would produce their programming in exchange for some additional money to hire personnel and full rent support. If they did this, they would save more than what the county manager’s proposed budget cut saves them.”

County Board Chair Katie Cristol confirms that the county has received a proposal from AIM, which will be discussed by the board at the end of April.

In December 2016, the county entered into a new agreement with Comcast that removed the “dedicated funding to AIM and other nonprofit cable entities,” according to the county. It also details that the funding to AIM was cut by $70,783, “as the first step in a multi-year plan to reduce AIM’s reliance on county net tax support.”

“This has been a sobering and difficult series of budget conversations for our community, as challenges in our commercial assessments resulting from a high office vacancy rate have led to a gap of about $20 million, mirrored by a similar gap for Arlington Public Schools’ budget,” Cristol said. The county manager has introduced several proposals, “all of which will be painful,” to try to make ends meet, all of which are under consideration.

“Final determinations about funding reductions to AIM and/or other county programs, as well as any possible solutions we can take to mitigate impacts on those programs, will be made at the end of April,” she said.

In a budget summary, the county says the 20 percent reduction “will require AIM to reallocate resources and reprioritize activities within its existing budget or find new funding to continue its current level or services. There is no impact to county programs and services.”

AIM’s board of directors is still trying to figure out what might happen and how to make up the financial difference.

“The worst-case scenario involves cutting our hours even further and cutting back the amount of training that we do now,” said Kim Phillips, a board member. “Cutting back our training will hurt AIM badly and this will trickle out into the community we serve. Cutting back our hours means that producers and volunteers will have less access to the facility than they do now. This affects programs and those who want to make programs.”

AIM’s board also is considering possibly making the facility available as an arts and media center, providing a space for meetings in addition to classes and some art functions. “This idea takes time, though, and the AIM board realizes that it is not an instantaneous fix. We are also looking at a number of different scenarios to stay open and on the air, both for TV and radio.”

“AIM is media created by and for the community. All of our programs are volunteer created and curated … we record and broadcast high school sports, meetings and events in the local community, including Arlington Committee of 100 and Rosslyn Jazz Fest and the Columbia Pike Blues Festival. We participate as video techs at Nauck Day,” she said. “We celebrate the diversity of Arlington through our programs.”