‘It Was the Right Thing to Do’ in Chantilly
Votes

‘It Was the Right Thing to Do’ in Chantilly 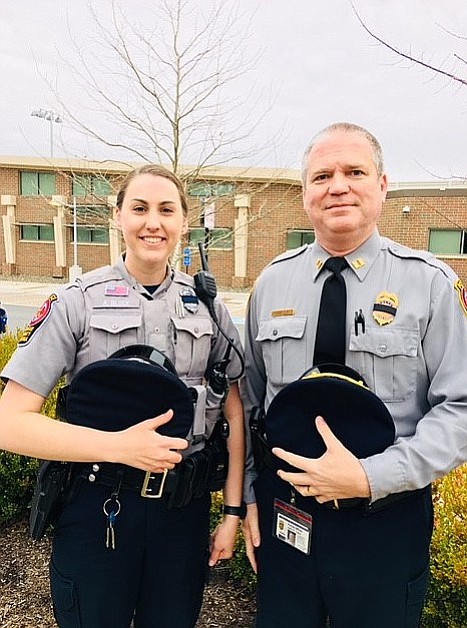 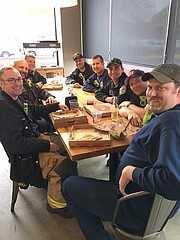 Whether they’re putting out fires or keeping the community safe from crime, public safety personnel are one, big family. And when one of their own needs help, they all come together to lend a hand.

And that’s just what happened on Tuesday, March 20, at MOD Pizza in the Greenbriar Town Center in Chantilly. Police, firefighters and area residents ate lunch and dinner there to raise money for Ashley Block, a McLean District Station police officer who was severely injured while helping clear a road during the March 2 wind storm.

“She’s a patrol officer who was newly cut loose from her field-training officer,” said her supervisor, Sgt. Laura Redman. “There were trees down everywhere and, while one officer cut them up, Ashley was clearing away the debris. But the wind was so strong that the top of another tree broke off and fell on her.”

“It pinned her on the ground and impaled her leg,” continued Redman. “She broke her femur, shoulder, elbow, four ribs and some vertebrae. Doctors expect her to fully recover, but it’ll take a long time.”

In fact, Block’s injuries will likely cause her to be off work for 16-18 months. Like his fellow police officers, Lt. Ryan Morgan, assistant commander of the Sully District Station in Chantilly, heard about her accident and felt bad for her. And the next time he stopped in for a bite at MOD – which serves custom, artisan-style pizzas – he mentioned it to Dean Ladson, the store’s general manager.

“Ryan’s a regular here, and he was casually talking about what happened,” said Ladson. “So my assistant general manager, Josh Kuster, and I suggested maybe we could do something to help. MOD believes in community giving, and we felt like this was our way of giving back.”

Most restaurant fundraisers generally give 10 or 20 percent of their proceeds during a two- or three-hour period to the recipient. But in this case, Ladson wanted to do more. “So we asked MOD’s fundraising arm in Seattle if we could make the proceeds 50 percent. We also made it all-day and counted the proceeds from anyone eating here March 20, not just those mentioning the fundraiser. In addition, we decided to donate 100 percent of the day’s tips.”

On that date – despite freezing temperatures, sleet, ice and an impending snowstorm – residents and public-safety personnel flocked to the restaurant. And by day’s end, some $2,700 had been raised for the officer.

“I don’t think we’d be as established as a community without the police force,” said Kuster. “They really help out.”

“And we knew it was the right thing to do,” added Ladson. “We give people good meals, but also support our community. These folks [police and firefighters] come in and support us and other local businesses, and Officer Block was just doing her job and got injured in the line of duty.”

“Ashley has the best personality; she’s upbeat and a hard-charger,” said Redman during the fundraiser. “She has spunk and she’s always ready to go. She has heart for this job. The next day, when I visited her in the hospital, she was asking me when she could come back to work. She’s the kind of new officer that every supervisor wants.”

Sgt. David Kennedy, a former McLean officer now at Fairfax County Police Headquarters, said Block is “out of the hospital, on the mend and in good spirits. But even after she’s recovered, she’ll still be on light-duty status for a while.”

Crime analyst Lori Seiden, also formerly at McLean, is now at the West Springfield station. “Ashley’s always supporting my people,” she said. “She’s really friendly and wants to serve her community. So with this fundraiser, we all want to help offset her medical costs.”

All 14 members of Block’s squad, the A shift, participated, as did friends, plus others from the McLean station, including the Tactical Squad, SWAT team, detectives and the station commander, Capt. John Trace. (He and Morgan used to work together when Trace was the Sully station’s assistant commander.)

“MOD Pizza offered up the idea to partner with a fundraiser to support our critically injured officer,” said Trace.” Not only do they serve great food, but their company philosophy is very supportive in nature. Things went very well, even in the wintry weather. We had tremendous support from all of our public-safety friends and the community as a whole.”

Among them were about 16 members of the county police Motor Carrier (motorcycle) Squad. “McLean was my old station, and I’m here supporting a fellow officer,” said MPO Chris Huber. “But I also trained Ashley in speed measurement at the Police Academy, about six months ago. In class, she was attentive and engaged in the course – which is hard to find in a new officer. She stayed focused, so I could tell she’d be a good officer, out on the street.”

He tried MOD’s Calexico pizza with gorgonzola cheese, chicken and jalapeños and pronounced it “nice and spicy – perfect for a day like today. I’ll be back.” He also noted that, at one point, MOD “had a line all the way around here, from the counter to the back wall. Since Ashley’s only been an officer for six months, the amount of people that came out to support her says a lot. She’s a family member because we are a family.”

A whole table of firefighters from Fair Oaks Station 21’s A shift was there, too. Lt. Eddie Thurston made his own pizza with “a little this and a little that” and said it tasted good. Besides, he added, “It was important to come help them with the fundraiser.”

A shift Capt. E.J. Burroughs called Block “a fellow public servant, so this is one helping out another.” He said his shift always eats together to build teamwork. Enjoying the Lucy Sunshine pizza made with garlic, artichokes, asiago cheese and tomato sauce, he said, “I’d absolutely recommend MOD because they make whatever you want and it’s really good.”

Joining them was Hazmat Technician Jorge Arce of Fairfax’s Fire Station 40 on West Ox Road. Happy to pitch in for a police officer, he said, “Whether we’re police or firefighters doesn’t make a difference. We still respond to calls together, so I wanted to help out. This was my first time here, but I’m definitely coming back. The pizza is fresh and good, and you can’t beat their real pizza oven.”

Also there were brand-new, Fair Oaks Police Officer Sladzana Resnik and her training officer, MPO Lauretta Garrett. “This is our first time here,” said Garrett. “We came for the fundraiser; we have to support our family members. I’ve never met Officer Block, but she had a terrible accident.”

They each had salads and shared a pizza with tomato sauce, mozzarella cheese, onions, black olives and mushrooms. “It was amazing,” said Garrett. “We’ll come back again.”

But last week, they were there for one of their own. Said Resnik: “As police officers, we work as one and take care of each other.”