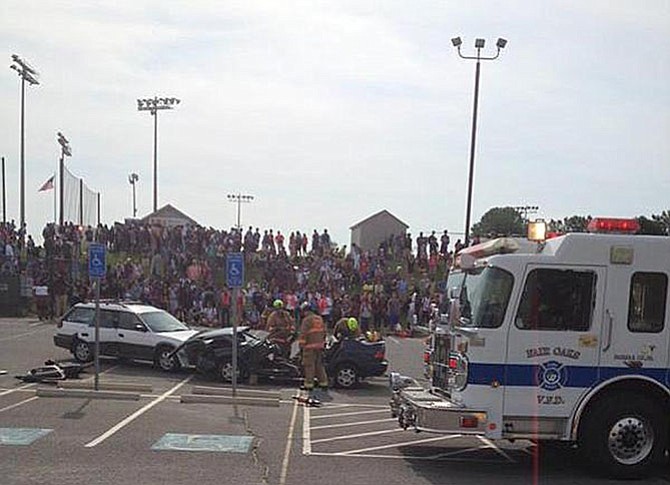 Firefighters used the Jaws of Life to extricate "victims" after this "crash" at Centreville High. Photo Courtesy of Savannah Sherman 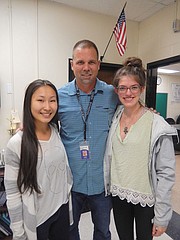 High schools offer a variety of extracurricular clubs for students, such as chess, language and robotics. But at Centreville High, students may also join the First Responders Support Club. 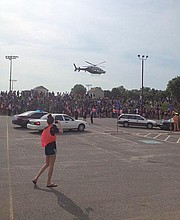 Students watch the police helicopter in the sky during the June exercise illustrating the dangers of drinking and driving.

“Teens don’t always appreciate first responders as much as they should,” said member Udval Batbayar.

“So the purpose of this club is to recognize and support our local first responders and also to promote teen safety,” said Savannah Sherman. “And I want our community to be closer to our police officers, especially in light of what’s going on elsewhere.”

Sherman started the club last fall, and about 40 students — mostly juniors — joined. In December, the students partnered with the Fair Oaks District Police Station in a drive to collect new toys for the children at the Katherine Hanley Family Shelter. It was one of the club’s first activities, and the members also participated in the Christmas party for the children, along with the police officers, when they delivered the toys.

“And we try to have a potluck lunch once a month with the Fair Oaks police,” said Batbayar. “They invite us to their lunch and we bring some of the food.”

“We also bring lunch to the firefighters sometimes, and doughnuts and pie to the police, and they really like it,” added Sherman. She then explained why she began the club.

“My brother was a volunteer firefighter in Prince William County, and they treated him well — and me, too, when I visited him,” she said. “So I want my peers to recognize our first responders, and I especially want to stress to them that the police are working for, not against, us.”

This year, the club members toured the Fair Oaks Fire Station, the fire academy and the McConnell Public Safety and Transportation Operations Center (MPSTOC), including the 911 dispatch center. And, said Sherman, “We did a fundraiser at Firehouse Subs in Centreville Square for a Fair Oaks firefighter whose son had brain cancer.”

Batbayar said club members also attended the St. Patrick’s Day Parade in Washington, D.C. “Firefighters and police were in it, and we carried signs saying, ‘Centreville High School First Responders Support Club,’” she said. “And we go to the Fair Oaks Police Citizens Advisory Committee meetings once a month to learn what’s going on in the community.”

“We hear about what crimes are happening and listen to the citizens talk about various issues,” said Sherman. “We’ve built relationships with both the police and firefighters; we want teens not to be afraid of the police, because they’re just like us.”

Sean Scott teaches criminal justice at the school and is the club’s sponsor. He’s a former Fairfax County police officer, himself. Of his 24 years total with the Police Department, he spent 11 years on the SWAT team and nine years in the Organized Crime and Narcotics division.

“The students have done an awesome job,” he said. “They formed a partnership with the Criminal Justice II class and arranged for the police helicopter and Jaws of Life to come here for a DUI demonstration for the school. It’s an education piece that’s warranted before prom and the end of the school year, and what’s neat is that students are provided the knowledge for better decision-making.”

In addition, said Scott, “The club established a liaison with the firefighters and police officers where they can have a partnership and learn about these professions and the commitment and dedication required from first responders.”

For the holidays, the students made cards for the Fair Oaks police and firefighters, the Sully District police and Centreville’s Station 17 firefighters. They gave baked goods to the Town of Clifton firefighters, and Sherman got students in the school’s Key Club to write welcome-back cards to members of the county’s Urban Search and Rescue Team when they returned from assisting in Nepal after the massive earthquake there.

Centreville’s prom was June 6, and the Jaws of Life demo — rescheduled from June 4, due to rain — was held that day, outside the school, for the juniors and seniors. “The students saw a staged crash scene and the firefighters and police responding to it,” said Sherman. “One car had two ‘drunk’ students, and our theater students had put makeup on them so they’d look bruised and bloody.”

The other car involved in the “crash” contained another student plus a police cadet portraying a student (so he could be Medivaced in the police helicopter). “They were the injured victims,” said Sherman. “And they were more seriously injured than the drunk driver who caused the accident.”

In the scenario, firefighters cut the victims’ car in half, using the Jaws of Life to extricate them. The cadet was then flown by helicopter to the hospital, while the student was taken there by ambulance. The “drunk” students were given sobriety tests, handcuffed and put into a police car. So, said Sherman, “It showed the reality of what happens to people in this situation.”

“And the students learned that drinking and driving is truly not worth it,” added Batbayar. Overall, she said, “This has been a fantastic first year for our club, and we’ve learned so much about how things work.”

Sherman said how proud she was of all the club’s officers who helped her. “And we enjoyed forming relationships with our local first responders. Now, when we see them out in the community, we can wave at them and say hi.”

“We have a better sense of community,” said Batbayar. “It feels nice; we feel like we belong and we feel safer.”

And, added Sherman, “We know who’s going to protect us — and it’s good to thank them.”