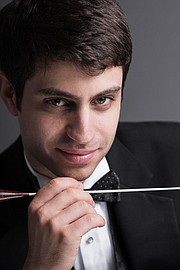 During the 74th season, the Alexandria Symphony Orchestra (ASO) has been featuring its four candidates for music director. The finalists have conducted symphonies from Xalapa, Mexico to Lucena, Spain — from the Los Angeles Philharmonic to the Washington National Opera. One candidate will be chosen later this spring as the ASO’s next music director, and special events and appearances are planned to introduce him to Alexandria and the surrounding community during the ASO’s 75th Anniversary Season in 2018-2019.

“The connective thread for this program is three composers from three different eras pushing the limits of musical form,” said Hersh. Bach’s Symphony bridges the Baroque and Classical styles by using classical form with innovative harmonies and unexpected timbres. “Piazzolla composed ‘Tangazo’ in classical form as well, but he also summons the fiery tangos of his homeland within Bach’s structure — including a fugue,” comments Hersh.

“Brahms’ Second is often described as the sunniest of his symphonies, yet the composer called it so melancholy it should be printed on black-bordered paper,” observes Hersh. “For this reason — and its timeless melodies — it remains utterly fascinating nearly 150 years after its premiere.”

Concert attendees, musicians and community members are invited to provide feedback after the performance. The ASO will announce the new music director later this spring.

The Alexandria Symphony is a fully-professional orchestra drawing from the Washington, D.C. metropolitan region’s wealth of musical talent. ASO musicians perform with other orchestras and top military bands. The ASO performs Saturdays at Rachel M. Schlesinger Concert Hall and Arts Center and Sunday matinees at the George Washington Masonic Memorial. Adult tickets are $20-$80, with $5 youth, $10 student and military, senior and group discounts available. To order tickets and for more information, visit www.alexsym.org or call 703-548-0885.