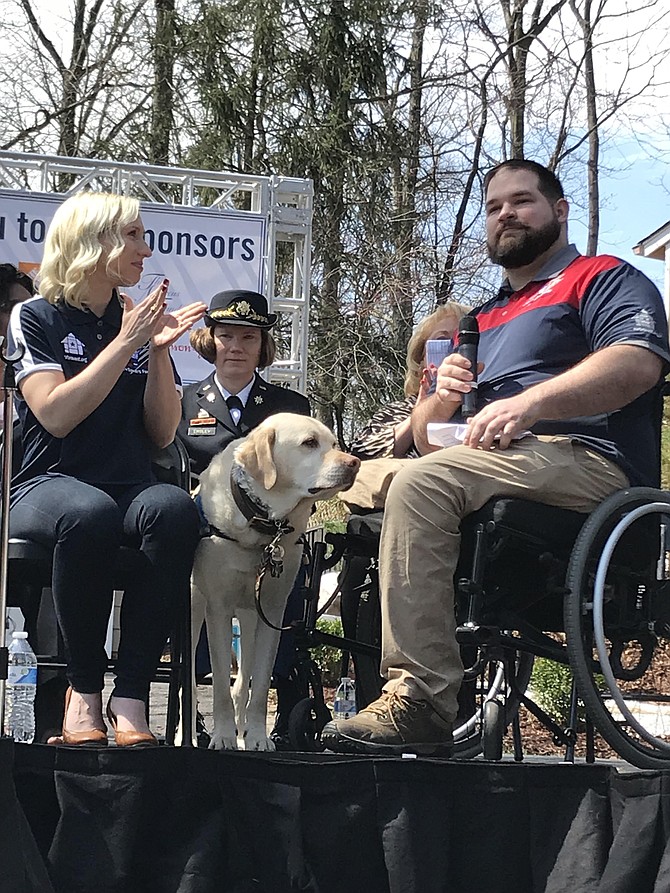 “People need a place where they can feel comfortable, where they can relax and where they can be at ease. For most people, it’s their home. Until today, this was just a house where I lived. Now I feel like it’s my home," said Captain Gavin White, before he received the keys to his newly renovated mortgage-free smart home, compliments of the Stephen Siller Tunnels to Towers Foundation Building for America’s Bravest program. Photo by Mercia Hobson.

“Until today, this was just a house where I lived. Now I feel like it’s my home." — Captain Gavin White

The Navy Junior ROTC Color Guard of Herndon High School presents the colors at the Home Dedication Ceremony for service member Captain Gavin White who was injured in combat. 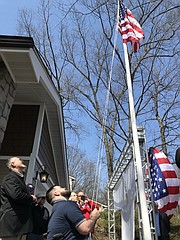 Before entering his new home, Captain Gavin White raises the American flag, something he plans to do every day. 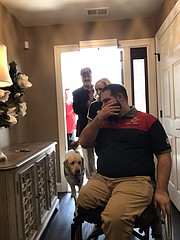 Captain Gavin White unsuccessfully tries not to tear up as he and his wife Karissa enter the front door of their home and see it for the first time since they left it four months earlier. 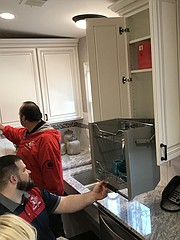 Frank Siller, of Stephen Siller Tunnel to Towers Foundation, shows White how the cabinet shelves lower, allowing him not only ready access to get a dish, but also to put away clean dishes from the dishwasher.

Home at last and with a smile. When Captain Gavin White realized his house had become an obstacle course of constant frustrations, he reached out to the Semper Fi Fund for guidance. On the table, behind Captain White and his wife Karissa, rests a beam from the south tower of the World Trade Center, a gift from the Stephen Siller Tunnel to Tower Foundation.

One day in 2013, while Captain Gavin White led a patrol in Afghanistan looking for improvised explosive devices, one found him. With that one step, White’s life and the life of his wife, Karissa, changed forever. He remembers hearing the blast and calling out to his combined Afghan U.S. Patrol, "Who’s hit?" Then hearing the words, "You are, Sir."

Captain White sustained catastrophic injuries. His right leg eventually was amputated; he lost the use of his left leg. White suffered chronic pain and other injuries, and he endured sixty surgeries. He would try to walk the hospital halls, White recalled, "...through grinding teeth and tears of pain and frustration."

White grew stronger, and with his wife, they moved into a house in Herndon, only to realize it was an obstacle course of unending frustration for him.

"Problems began to appear in my house," said White who sat in a wheelchair outside of it, up on a temporary stage. Karissa sat beside him. Behind White, a 30-foot long American flag flew, suspended on a long wire. The flag shielded the view of the house. "I knew I needed help, and had to ask for it."

THIS DAY, April 12, 2018, was the Home Dedication Ceremony. In front of White, a crowd of more than 100 people stood silently. The night before, the Stephen Siller Tunnel to Towers Foundation Building for America’s Bravest program had put the finishing touches on their four-month renovation of the Whites' home in Herndon. It was now a “smart home” for Captain Gavin White and his wife due to the efforts of many businesses such as the Reston Home Depot, Wolf Furniture, J.C. Penneys and more.

Before the renovation, White could not reach the cupboards; the narrow hallways were challenging to maneuver through in his wheelchair. White could not use the stove with any ease. “At one point, every time I wanted to use the bathroom, I had to get out of my chair to the floor and walk on my hands to get to the toilet.”

“I reached out to the Semper Fi Fund," said White as he spoke to the crowd. He continued: “People need a place where they can feel comfortable, where they can relax and where they can be at ease. For most people, it’s their home. Until today, this was just a house where I lived. Now I feel like it’s my home."

The Semper Fi Fund had put White in touch with the New York nonprofit organization, Stephen Siller Tunnels to Towers Foundation. The organization’s stated mission is to "Honor the sacrifice of firefighter Stephen Siller who laid down his life to save others on September 11, 2001."

On hand at the Dedication Ceremony stood Stephanie Ferguson of the Semper Fi Fund. Ferguson said, "We are the land of the free because of you Captain Gavin White."

Frank Siller told the crowd, how his younger brother Stephen had heard over his scanner of a plane hitting the north tower of the World Trade Center. Stephen returned to the Brooklyn's Squad 1 fire station, grabbed his 60-pound backpack full of gear and drove his truck to the entrance of the Brooklyn Battery Tunnel, but it was closed. He strapped the backpack on and raced on foot through the tunnel to get to the World Trade Center. Stephen entered the south tower and was never seen again.

Siller said his brother lived by the guiding words attributed to St. Francis Assisi: "While we have time, let's do good."

Siller explained the Stephen Siller Tunnel to Towers Foundation is a nonprofit organization, which honors "military and first responders who continue to make the supreme sacrifice of life and limb for our country."

The organization performs their service through their Building for America's Bravest program and with the support of many other organizations and program sponsors, such as those here that day, among them the Reston Home Depot through their Home Depot Foundation, JC Penney, Wolf Furniture and more. Tunnel to Towers builds mortgage-free smart homes for the most catastrophically injured service members.

The Reston Home Depot was one of the many program supporters. Jason Alexander, Store Manager of the Reston Home Depot, thanked Captain Gavin White for his service to the country. Alexander explained the Home Depot Foundation and Team Depot, their strong army of associate volunteers, are dedicated to serving veterans and was proud to support the project's needs. Alexander said Home Depot Foundation had improved 37,000 veteran homes and facilities since 2011, promised to give a quarter of a billion dollars for veteran-related causes by 2020, and $50 million is committed to training 20,000 tradespeople by 2028.

AFTER THE REMARKS, the Whites were ready to see their new home, but not before being presented a gift by the Stephen Siller Tunnels to Towers Foundation in gratitude for White's service and sacrifice. In Frank Sillers' hands rested a piece of blackened steel beam from the south tower of the World Trade Center. "It holds the spirit and souls of so many. We entrust it to you, Captain Gavin White," said Siller, adding the words, "Who better?"

On the curb, a specially equipped van donated by GMC waited for White. Volunteers turned toward the ropes. They lowered the flag, unveiling the renovation. Welcome, Captain Gavin White. You are home.