Highlanders score four runs in bottom of the ninth inning. 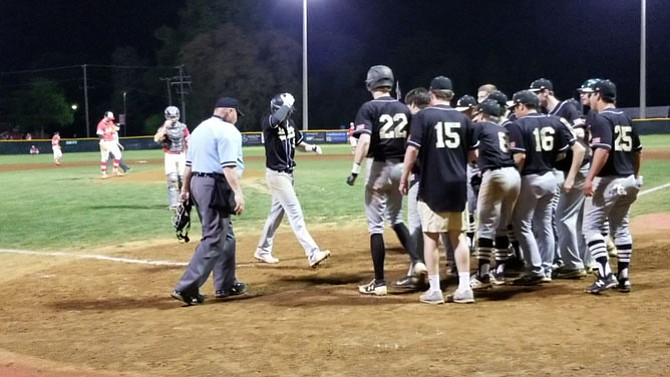 Members of the Langley baseball team greet Jack Hoeymans at home plate after the junior hit a two-run home run in the ninth inning of Friday’s game at McLean High School. Video screenshot by Jon Roetman 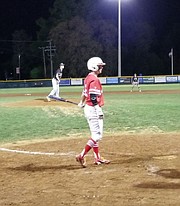 McLean left fielder Marshall Pratt hit a game-tying, three-run double in the bottom of the ninth inning during the Highlanders’ 8-7 win over Langley on Friday.

McLean’s Anthony Farmakides slides in with the tying run in the bottom of the ninth inning.

McLean outfielder Marshall Pratt punched the fence shortly after a Langley home run sailed over it.

Pratt, playing left field for the Highlanders, vented his frustration after Jack Hoeymans’ two-run homer gave the Langley baseball team a 7-4 lead in the top of the ninth inning. Pratt, however, would get a chance to take his anger out on the Saxons in the bottom half of the frame and the McLean senior delivered a devastating blow.

Pratt ripped a game-tying, three-run double down the third-base line in the bottom of the ninth and later scored the winning run in a dramatic 8-7 victory over Langley on May 4 at McLean High School.

THE WIN, coupled with a South Lakes loss, put McLean in sole possession of first place in the Liberty District with one regular season game remaining. The Highlanders were scheduled to face Washington-Lee on Tuesday, after The Connection’s deadline.

After Langley scored two runs in the seventh to send the game to extra innings, the Saxons took a three-run lead in the ninth thanks to an RBI single by catcher Cooper Davis and Hoeymans’ two-run bomb. Langley’s excitement was short-lived, however, as McLean responded with four runs in the bottom half, with the game-winner scoring thanks to a Langley throwing error.

McLean’s Grant Williams and Jackson Kantor reached via base on balls to lead off the bottom of the ninth before a single by Anthony Farmakides loaded the bases with nobody out, setting the stage for Pratt.

“We saw the [Langley relief] pitcher come in and he was looking pretty hittable,” Pratt said. “He walked the first couple guys and I got up there mad. I knew I could do something.”

Pratt delivered a double into the left-field corner and advanced to third during a throw to the plate. After a pair of intentional walks loaded the bases, a Langley throwing error allowed Pratt to score the winning run.

“Of course, there were doubts,” Pratt said of a potential McLean comeback following Hoeymans’ ninth-inning home run, “but I knew it was still something that we could control. We were going to get the bats in our hands and that was something [McLean head] coach [John] Dowling always talks about — control the controllable. If I would have hung my head there, given up, gone to the plate with a negative attitude that’s just losing the game for us.”

The McLean comeback overshadowed clutch performances by a pair of Langley sluggers.

With the Saxons trailing 4-2 and down to their final out in the seventh inning, Davis delivered an RBI single, cutting the McLean lead to a run. Hoeymans then stepped to the plate and tied the score with an RBI single of his own.

With the score tied at 4 in the top of the ninth, Davis again delivered a two-out, run-scoring single, giving Langley a 5-4 advantage. Hoeymans followed with the two-run homer.

Davis finished 3-for-4 with two RBIs. Hoeymans went 3-for-5 with four RBIs.

“Jack’s working and working and working — he’s in the cage all the time,” Langley head coach Kevin Healy said. “Cooper has been swinging it with some authority over the last two years, but he’s been hot lately, especially going to the opposite field …”

LANGLEY, which ended the evening in a second-place tie with South Lakes, was scheduled to close district play against Herndon on Tuesday, after The Connection’s deadline.

The Liberty District tournament is scheduled to begin Friday, May 11.