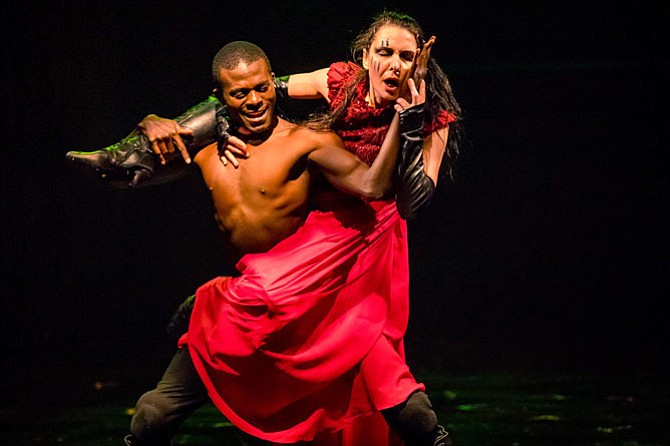 Revenge is a dish best served silent. Lucky number 13 in the “Wordless Shakespeare” series, Founding Artistic Director Paata Tsikurishvili sinks his teeth into this revenge-driven tragedy and tells the bloody tale of Titus and Tamora with a fiery passion, energy, and vengeance. “Titus Andronicus” is running from now through May 27 at Synetic Theater in Arlington.

Director Tsikurishvili said “Titus Andronicus” is an underrated play, and it doesn't get half the attention it should. “It has everything in it from Shakespeare's canon,” he said, “Including intrigue, war, romance, action, madness, and family drama. Because it is one of Shakespeare’s earlier plays, it has a fascinating blueprint of a lot of his plays that came after.”

He said they were trying “to expose the beating heart of Shakespeare’s work. By adapting the play in a purely visual manner, we allow the audience to interpret and customize it and come up with their own interpretations,” he said.

As far as challenges, he said: “For all of the big, broad strokes in ‘Titus,’ there are a lot of very subtle exchanges and scenes in this play, and a lot of jumping back and forth between various subplots, which can be very difficult to portray without the benefit of dialogue.”

For audience takeaways, he said: “Hopefully, people will see that this is a play about the cyclical nature of violence — the destructive pull of revenge, which is a very timeless and universal theme that we wanted to explore.”

Philip Fletcher plays the title role of Titus Andronicus, a soldier through and through. “He is intelligent and has a strategic mind born out of years of military leadership. Titus knows right from wrong but is bound by a greater conviction to follow chain of command and protocol, even when such orders or protocol goes against the greater good of the people and even against his personal interest,” he said. “As a renowned Roman general, a title Titus gained through years of hard service on the battlefield for the people of Rome, he is used to a certain level of respect and does not react well to being contradicted by anyone, especially in front of the general public of Rome and even more so by his own children.”

He said his challenge was figuring out how old his character is and how that informs his story and influences the locomotion he incorporates in the physical theater show. He was informed that Titus need not be of the age of Shakespeare’s text but more true to his actual age. “In Shakespeare’s text it is clear that Titus is very old and if anything, he is done with battle and not interested in rule over Rome when offered because he is ready to retire and live out his remaining days in peace,” he said. “However, for the Titus of our production I see his rejection when offered the rule of Rome as a testament to his intent to continue his military command. Titus is a soldier and knows his place and servitude to Rome is best focused on the battlefield, that is where he is comfortable, that is home to Titus, more so than Rome.”

He continued: “However, the larger challenge for me in my study of the Titus character was to understand why he would make some of the choices he does throughout the course of the show. It is too easy to say well, he is going mad so that is why he did this or that. The question for me is does he actually go mad or is it all a device to trap his foes. Ultimately, I settled on both, the mounting grief experienced by the Titus character as his offspring are offed one by one certainly takes a toll on him but even through his grief and any resulting psychosis he never loses his military acumen by which he is able to exact his revenge.”

Irina Tsikurishvili plays the role of Tamora Queen of the Goths. “In a lot of ways, Tamora is a kind of precursor to Lady Macbeth — driven, deadly, scheming — but she has a much clearer motivation for her actions: Revenge for the death of a child. She was a warrior-queen at one point, taken prisoner, but then made a queen again, so she’s on a bit of a roller coaster,” she said. “But now that she’s in power, she’s fully prepared to take revenge on those who have wronged her.”

She said her challenge was having to choreograph and then step in as a performer. “Having to wear both hats, so to speak — is always the biggest challenge. And having to be nasty to Philip Fletcher, who’s playing Titus — that’s always tough,” she said.

She hopes audiences come away with a new appreciation for the play, realizing that it’s a kind of blueprint for all of Shakespeare’s later work. “It’s full of drama, passion, action, dark humor — everything’s there, and hopefully our audiences will see all of it in our interpretation,” she said.

Dan Istrate plays the role of Saturninus, an ambitious, impulsive and power-hungry egomaniac. “He is certain he deserves to be the next emperor and he would do anything to get the crown. Once in power, due to his reckless actions, disastrous and irrevocable events are set in motion,” he said.

He continued: “As always when working on a wordless Shakespeare play, the challenges are in creating a character out of nothing. I stayed away from watching any movies or reading any articles about Titus Andronicus whatsoever. I wanted to find a very original way to give Saturninus life, to make him human, even though we (Synetic) play in a highly stylized environment. So that was a challenge but I am very happy with what I discovered so far.”

He continued: “Working with Paata and Irina is such a rewarding experience because you have complete freedom as an actor, which can be scary and in the same time you know that the result is always top notch.”

Tori Bertocci plays the role of Marcia (Marcus in the original play). “Marcia is the head of the Senate and Titus's sister. Marcia is very much the witness of the play. She sees all of the pieces falling around her. She is more diplomatic than her brother and uses both mind and heart when making decisions. Her fatal flaw is that she is complacent. She knows things aren't falling into place as they should, yet she does nothing,” she said.

She added: “Marcia isn't one of the main characters, which means you only see her a few times. I made it a personal challenge that the audience is impacted by her and feels what she feels whenever she is on stage.”

As far as audience takeaways, she said: “I hope the audience sees the results of revenge. I hope the audience recognizes the characters who were directly affected by the chaos, those who chose to avoid it, and the difference their choices made.”

Synetic Theater is presenting “Titus Andronicus” from now through May 27. Show times are Wednesdays through Saturdays at 8 p.m.; Sundays at 2 p.m. Tickets are $20-$60. The venue is located at 1800 S. Bell Street, Arlington. Visit www.Synetictheater.org.