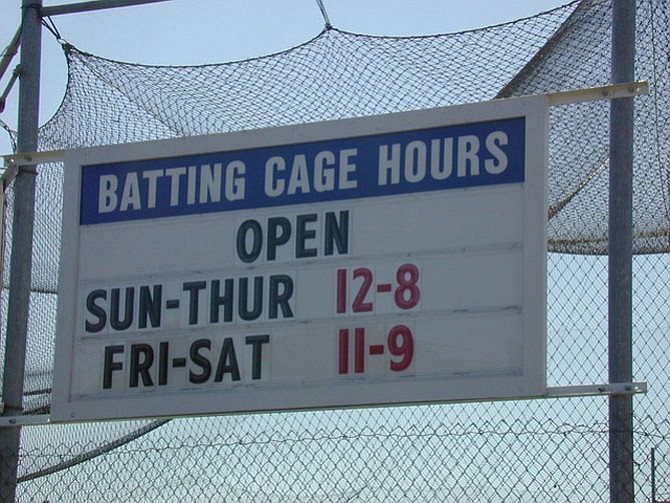 The facility was open seven days a week. Photo contributed

Baseballs or softballs get flung out over the plate from these two wheels that spin at various speeds. 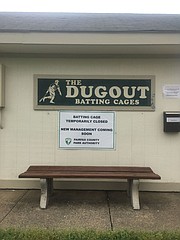 Outside the Beltway midst the rolling hills, trees and Little League baseball teams, the Dugout batting cage in Centreville is a center of attention for some, and a source of revenue for others, but that all came to a halt on May 1 when the Fairfax County Park Authority closed the facility.

Bernard C. Voyten Jr. didn’t feel the closure was warranted, and is rallying against the closure.

Voyten is the president of the engineering firm Voyten and Associates, Inc. that financed and built the batting cage 25 years ago, he said.

“We have paid FCPA hundreds of thousands of dollars in rent, but more importantly, provided a recreational facility which FCPA was unable to provide,” he said in a release.

Voyten compared the batting cage closure to the closure of the “Islands in the Park,” mini golf closure five years ago. Fairfax County spent $180,000 in legal fees, and $170,000 removing the “Islands in the Park,” Voyten said. It was next to the Dugout batting cage in Braddock Park. This made Voyten believe that the Dugout would be permanently closed, but that’s not the case, said county officials.

Others came out to support the batting cage and in the end, the Dugout Batting Cage will soon live on to see another line drive.

District Supervisor Pat Herrity (R-Springfield) talked to some of his constituents about the closure.

“We have heard from some of the regular users of the batting cages and I have let it be known that permanent closure will not happen,” Herrity said. “The decision to terminate the lease agreement was the Park Authority's due to long standing issues that the parties have not been able to resolve.

“Fortunately, the batting cages will again be open in approximately two-to-three weeks after the necessary staff is hired and/or rehired, which I know is important to the community.”

According to information released by FCPA spokesperson Judy Pedersen on Friday, May 11, “We are in the midst of a changeover from past management and hope to have the site operational soon. We recognize that this closure is inconvenient and intend to begin operations again as soon as reasonably possible,” she said.

Voyten is skeptical from past dealings with the FCPA, and has heard they are opening possibly as soon as this coming Saturday, May 19, but he says he’ll believe it when he sees it.

Is he happy that it’s reopening? “If it provides pleasure and the same level of service, yes I’m happy,” he said. But he is skeptical the FCPA can come through. “It’s a tough one,” he said. With the money owed to Voyten, his future plans fall in the “can’t comment,” category, he said.

Any dispute with tokens that have already been purchased will be resolved by the FCPA, or batters can just hold on to them and use them again when the Dugout reopens.

“We ask for your patience in this matter. For more information please contact Park Services Director Barbara Nugent at 703 324-8585 or the Public Information Office at 703-324-8662,” according to the FCPA.