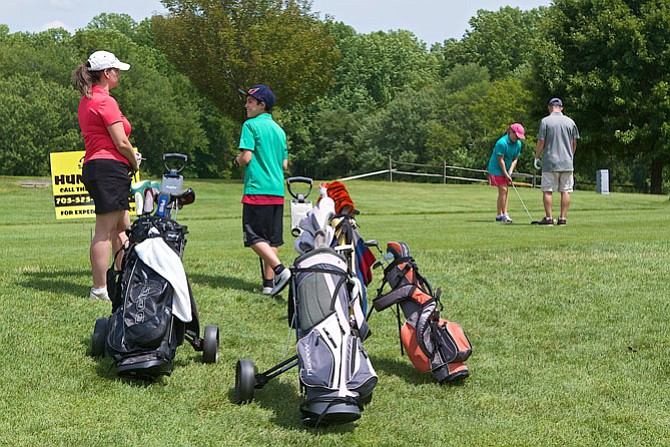 Though not typically a winter sport, talk of golf is heating up a chilly February.

Over 100 citizens attended a meeting held Feb. 11 at Pohick Regional Library to discuss the prospect of Burke Lake Golf Park being upgraded and run by a private commercial entity.

The aging clubhouse and driving range along Ox Road are due for upgrades, provided for in Park Bonds passed in 2008 and 2012, respectively.

But Fairfax County released that the Park Authority was approached by a private commercial entity with an “unsolicited proposal” to redevelop the clubhouse and driving range. That organization is KC Management, LLC, whose president and founder Timothy Kampa is also responsible for the Kingstowne Golf Center.

Kampa and KC would operate under the Virginia Public-Private Education Facilities and Infrastructure Act (PPEA), whereby businesses can build and run facilities on public land. Their proposal for the Burke Lake Golf Park dates back to December 2012, with amendments made through November 2014.

Supervisor Pat Herrity attended the meeting, along with three representatives from the FCPA.

Herrity said he’s concerned about putting a major commercial operation in the middle of Burke Lake Park, as well as potentially pricing out golfers who use the park as a less expensive alternative to country clubs.

“It’s out of character with the community, the current golf use at Burke Lake Park,” Herrity said in an interview. “I can’t imagine dropping Top Golf into that community.”

Parents of members of the Lake Braddock Secondary School cross country team attended the meeting and raised fears that the proposal would infringe on the well-used trail around Burke Lake. Others were concerned that a bar-restaurant atmosphere of the plan’s new clubhouse would disturb the natural peacefulness permeating Burke Lake Park.

“We will clearly not let the project interfere with the cross country trail,” Herrity said. “If we can’t do this without a significant impact on the golf community or the surrounding community, it won’t get done.”

Herrity has asked for a follow-up meeting with the FCPA and stressed that “we don’t have a proposal on the table at this time,” adding that the proposal from KC Management needs a lot of work before it would be “even remotely acceptable.”

The release from Fairfax County states that the FCPA “anticipates holding a public meeting and a public hearing on the proposal if it moves forward.”

To see the FCPA release with links to Fairfax County’s Public-Private Education Facilities procedures and the proposal from KC Management, LLC, visit www.fairfaxcounty.gov/parks/plandev/burke-lake-golf-ppea.htm.