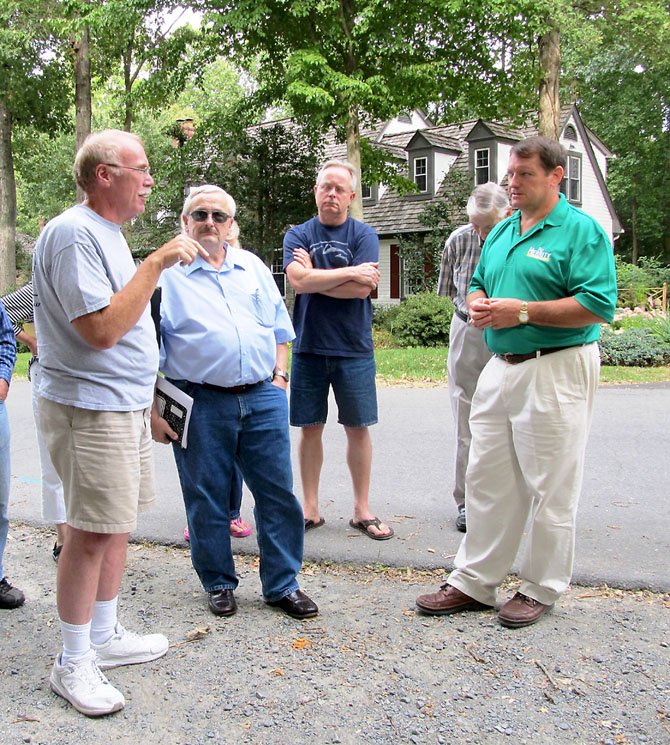 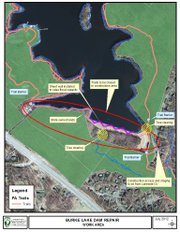 The park authority is estimating that it will take 90-120 days to complete the project. During that time, signs will be erected throughout the park alerting users of the trail to the temporary change. The map shows the three points along the trail that will be affected by the dam repair. Take a look at the map and plan your walks along the trail keeping in mind that a full loop will not be possible while the dam is being repaired.

Chris Amans and his wife, Brenda Riffe, have lived in the leafy neighborhood of South Run in Fairfax Station since the community was developed in the mid-1980s.

Bordered by Lee Chapel Road, Route 123, and the Fairfax County Parkway, many of the community’s 500 homes, which sell for close to $1 million, back up to Burke Lake Park.

While they love the neighborhood’s mature trees, expansive 1/2-acre lots and access to Burke Lake Park, they have never been happy with the fact that their Laketree Drive cul-de-sac has become an unofficial entrance to the popular Burke Lake trails.

ON WEEKENDS, the cul-de-sac is often filled with cars parked haphazardly on their street, as park-goers use the 4-foot gravel berm as a de-facto parking lot.

“There’s been more outsider traffic to use entry to the park, and it damages the road,” Riffe said. “I’ve seen 12-15 cars parked here at one time,” Amans said. 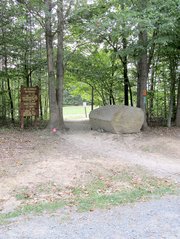 Chris Leach, a longtime South Run homeowner and member of the South Run Regency, told Herrity that while some people are respectful of the neighborhood’s speed limits, other frequently zip through the neighborhood without regard to children playing in their front yards.

“I’ve literally been passed on this street by drivers flying by to get to the trail, and people haul canoes and all kinds of gear without any respect that this is a neighborhood with small children. There’s no need for them to do that,” Leach said.

Beginning in mid-September, the dam at Burke Lake Park will be undergoing repairs to comply with new state dam regulations. In addition, note the following changes at the park during the renovation of the dam:

*While there will be closure of some trails in proximity to the dam, the trails used by the schools for cross-country races will not be impacted by the construction. Teams will also be able to use alternative routes for practice.

*There will be no access going to or coming from the neighborhoods in South Run.

*Construction of the wall and other improvements will require a drawdown of the water in the lake of 4.5 feet for the duration of the project (three to four months).

*FCPA boating opportunities will cease during the trail closure and lake draw down. The VDGIF boat ramp also will not be usable.

*Events and shelter rentals will be accommodated through alternative routes and facilities.

*Construction vehicles will access the dam from Laketree Drive for the duration of the project.

Project updates and information will be posted in park kiosks and as available on the park authority website.

Now that the dam at Burke Lake Park will be undergoing repairs this month to comply with new safety standards, residents are even more concerned about the volume of traffic and the added hassle of heavy construction equipment, since the unofficial entryway on Laketree Drive has been identified as the official entry point of state contractors rehabbing the dam.

The Virginia Department of Game and Inland Fisheries (VDGIF), the state agency responsible for maintaining the lake, has notified the park authority that work is scheduled to begin on the dam later this month, and will last 90 to 120 days.

Residents who met with Herrity had several concerns. They said VDGIF did not need to rip out 30-feet of mature trees, or pave over the area with blacktop, to gain access to the dam. Some residents did not want Laketree Drive used as the construction entrance at all.

“You can’t convince me that there’s not going to be construction equipment obstructing the street,” said resident Shelly Bralich. “I don’t care how much it costs to move the entrance of the project (out of the neighborhood). These roads were not made for heavy construction equipment, and we’re the ones who are going to incur the costs of damages when the construction crews leave.”

OTHER NEIGHBORS said they were concerned about construction crews trampling through their yards, using the park entrance as a bathroom, and interfering with the four school bus runs that pick up and drop off students each day.

“They won’t have to deal with the aftermath. To me, that’s just wrong,” Bralich said.

“I’m dreading having problems with people running in and out of our yard,” said Eileen Daly. “People who use the park already walk through our yard, and let their dogs run off leash. My children can’t play in the front yard now, and (the VDGIF) people say they don’t know the size of the workforce. Is it going to be 50 people? More than that? They should be able to tell us by now.”

Herrity said the road Laketree Drive is public and it’s not likely the state will change the construction entrance. He also noted the six-foot-tall boulder marking the unofficial entryway makes it a natural park entry-point, and residents admitted the boulder has become a landmark in the neighborhood.

He told residents he believed the dam construction project was an opportunity to get people out of the habit of using Laketree Drive as a park entrance.

“The best solution is to live with the short-term inconvenience for a long-term solution,” Herrity said.

He said if residents can live with the short-term inconvenience of construction, there was a long-term opportunity to shut down the unofficial entryway and re-direct park-goers to an entrance off Old Keene Mill Road, which is far less developed.

He said another goal is to take the blacktop out of the project, and work with the park authority to get substantial trees to replace the ones that get taken down.

Herrity said he would continue to work with the Fairfax County Park Authority and other agencies to address the concerns of South Run residents.

Herrity said he and his staff have been working to publicize the project and the impact it will have on some of the facilities and the trails, which routinely accommodate more than 60,000 park-goers each week.

“As those who frequent the park know, the dam is a critical segment of the popular 5-mile trail loop that runs around the lake,” Herrity said. “The project will close the segment of the trail which runs over the dam.”

The remainder of the trail, he added, will remain open, but due to the location of the segment over the dam, users of the trail will not be able to make a complete loop and will be required to turn around prior to reaching the dam.

“Fairfax County's award winning park system is a big reason we are the envy of the region and our parks are well attended,” he said.