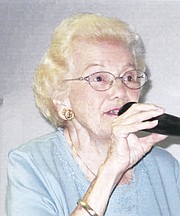 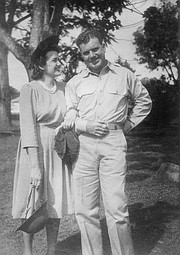 Ann Ames and Major Joseph R. Groves in a wedding photo from Dec. 22, 1941, holding a gas mask and helmet, since they were in Pearl Harbor during the attack.

Born on Oct. 26, 1918, Ann Ames grew up in Arlington, Va. She was Miss Arlington in 1936 before going off to college. Graduating from the University of Maryland in 1940, she traveled to Hawaii to help her sister who was expecting her first baby. She was there during the Pearl Harbor attack and married Major Joseph R. Groves Dec. 22, 1941. Her first child (Joe) was born in Hawaii in 1944.

Ann Groves loved military life and lived in Washington, D.C. (where her daughter Ann was born in 1946); Germany; Vienna, Austria (where her second daughter Clare has born in 1948); Staunton, and Arlington, Va.; and Japan. She was very involved with many volunteer organizations, including the Red Cross.

When she was 45, she began teaching fifth grade at Franklin Sherman Elementary School in McLean and retired 10 years later. She and Col. Groves retired to West Virginia, playing golf, bridge and joining in the community of Charles Town, W. Va. She was a member of the historical society and garden club, becoming a flower judge for many years. She also is an accomplished painter, studying and showing her work at the Corcoran Gallery in Washington, D.C. After 20 years, they moved to Lake Placid, Fla., leading a fun and active life.

Col. Groves died in 1997 and Ann later married a good family friend, Ernest Gurman. They enjoyed being together for 10 years until his death. Since all her children lived in Virginia, two years later Ann Ames Groves Gurman moved to the retirement community of Vinson Hall in McLean.