35 youngsters, ages preschool to 10, play games, dress up in costumes, and have a ball. 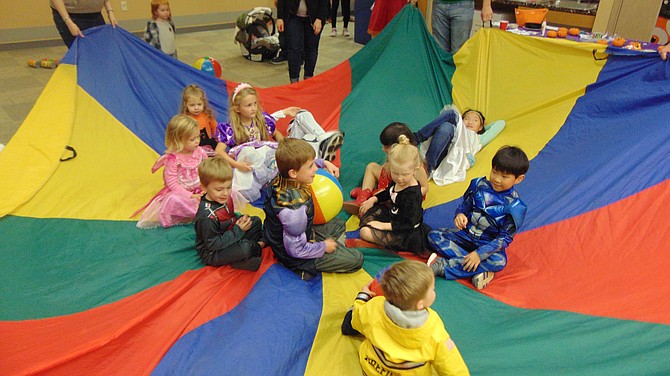 Children play the Popcorn Game with a parachute and beach balls. Photo by Steve Hibbard. 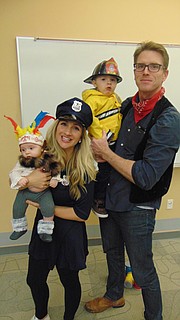 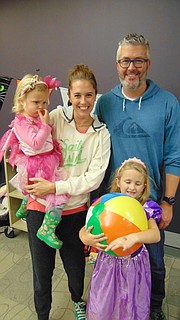 The Mack family of Springfield: Mom Katie, Dad Danny, Quincy, 6, and Leni, 2, at the Halloween Party at Burke Centre Library.

About 35 people attended a Halloween Party sponsored by the Burke Centre Library on Tuesday, Oct. 30, 2018. Targeting the preschool to age 10 group, the event featured games such as the Prize Walk, the Popcorn Game with parachute and beach balls, and the Hokey Pokey, as well as pumpkin decorating, bowling and bean bag toss, among others.

According to Nancy Klein, youth services manager at Burke Centre Library: “We wanted to have a Halloween Party because we know everyone likes to dress up and have fun for this holiday. We wanted to see everybody’s costume and have them know that the library’s a fun place to be during this holiday season.”

She added: “We see people get dressed up weeks before Halloween and visit the library so we know there’s a lot of young people out there who are really enthusiastic about Halloween -- so we wanted to just be a part of that.”

She said Burke Centre Library opened in 2008 and people consider it a “real sanctuary” in the community – a very quiet place that’s off the Fairfax County Parkway on its own. “We have these beautiful big windows that bring in a lot of natural light, so it’s a great place to sit and read, which is a big part of what we do here.”