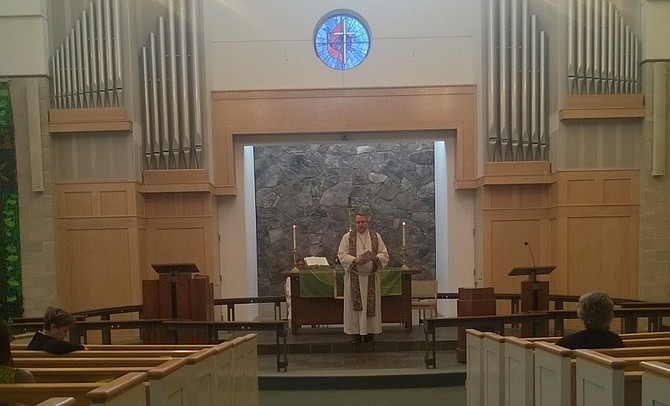 At the 11 a.m. traditional Sunday worship service Oct. 28 in Centreville United Methodist Church at 6400 Old Centreville Road, lead pastor Rev. Will Montgomery prays for the victims and survivors of a mass shooting at a synagogue the previous morning in Western Pennsylvania, where a gunman entered the Tree of Life Congregation in Pittsburgh and killed 11 people and wounded 6. Photo by Marti Moore

The Mason Police District still seeks help from the general public to identify a suspect captured on surveillance video while defacing the Jewish Community Center in Annandale at 8900 Little River Turnpike around 4:30 a.m. Oct. 8. Around 8 a.m. JCC staff found swastikas spray painted on the front the building. Call the station directly at 703-256-8035 or anonymously through Crime Solvers at 1-866-411-TIPS. Visit their website at http://fairfaxcri...">http://fairfaxcri....

This year’s discussion is “The Power of Love and The Power of Hate.” Keynote speaker is Dr. Marc Gopin, director of the Center for World Religions, Diplomacy and Conflict Resolution.

Honored guests are survivors of the Holocaust.

Admission is free. Parking is available at the Rappahannock deck on University Drive. Call 703-993-3321 and register in advance at Hillel@gmu.edu so organizers can provide enough food for everyone at their Kosher dinner.

On Consecration Sunday at the Centreville United Methodist Church at 6400 Old Centreville Road, about 85 people attended the 11 a.m. traditional worship service Oct. 28 and listened to a planned sermon by associate pastor Dr. Michelle Holmes Chaney about the “Grace of Giving” in the fall harvest season.

Following her message, lead pastor Rev. Will Montgomery prayed for the victims and survivors of another mass shooting the previous day that made the record books as the worst of its kind.

Chaney commented about the tragic loss after the service: “We can’t lose sight of the truth, which is, that God is in control.”

She added, “It leaves it for us, particularly as a church, to listen for God’s voice so we know how to respond.”

“We believe this is the deadliest attack on the Jewish community in the history of the United States,” said Jonathan A. Greenblatt, CEO of the Anti-Defamation League in his remarks on the civil rights and human relations organization’s website.

The ADL participated in a digital vigil since the mass shooting occurred Saturday morning during the Shabbat services at the Tree of Life * Or L’Simcha — a conservative Jewish congregation in Pittsburgh — where 11 people were slain and six injured by a gunman charged Oct. 27 with federal murder and assault by the U.S. Attorney’s Office in Western Pennsylvania, according to the U.S. Department of Justice.

The gunman, Robert Bowers, appeared in federal court Monday. He is in jail without bond. A hearing is scheduled for Nov. 1, according to a statement by U.S. Attorney Scott W. Brady, whose office is investigating these hate crimes.

The attack occurred within a year of a church shooting Nov. 5, 2017 in Texas, where 26 churchgoers were murdered and 20 wounded in the sanctuary of the First Baptist Church in Sutherland Springs. It was logged as the worst mass shooting in Texas history.

“We simply cannot accept this violence as a normal part of American life,” says Pennsylvania Gov. Tom Wolf at a press conference Oct. 27.

Wolf states “We must take action to prevent these tragedies in the future.”

Rabbi Kenneth Block of Temple Beth Torah, a Reform Jewish congregation in Chantilly, believes the polarizing rhetoric of our nation’s leadership appeals to the base motives of hate groups that target minorities like Jews and Muslims.

He recalls how Republicans were focused on families in the 1990s.

Yet this political party is silenced by the issue of gun control legislation every time families are torn apart in the wake of each mass shooting that occurs since the 10-year federal ban on manufacture of assault weapons and large capacity magazines was allowed to expire in 2004.

“It’s about power and control,” said the 73-year-old rabbi. “We’ve seen this before throughout history.”

Block, who has served TBT for more than two decades, wants conservative Christians to read what Jesus preached about the “The Sheep and the Goats” in the New Testament Book of Matthew 25:31-46. He believes a Christian will “know Jesus by the way you treat the least among us.”

The rabbi says his son lives in the Squirrel Hill neighborhood of Pittsburgh — a 5-minute walk from the Tree of Life Congregation — and is afraid of being singled out and not protected by the government.

“Prayers without action are worthless. Prayers with action will fix our problems,” states Block, 73.

That’s why Falls Church activist Carol P. Luten has worked with lawmakers for nearly six years since the massacre at the Sandy Hook Elementary School in Newtown, Conn. She and other grassroots volunteers helped create a movement for change with a new Virginia license plate that urges motorists to help “Stop Gun Violence.”

Also in the past couple of months, they personally delivered a “postcard from God” to all legislative offices on Capitol Hill and met staffers who work on gun control legislation. The direct mail pieces are printed with two Bible passages from the Old Testament: one of the Ten Commandments in Exodus 20:13 and a poem of King David in Psalm 34:13. Luten said she and six other grassroots activists from Northern Virginia hand-delivered the postcards “because God doesn’t use stamps, and God doesn’t need an address.”

They all agree everyone should vote in the upcoming midterm election Nov. 6.