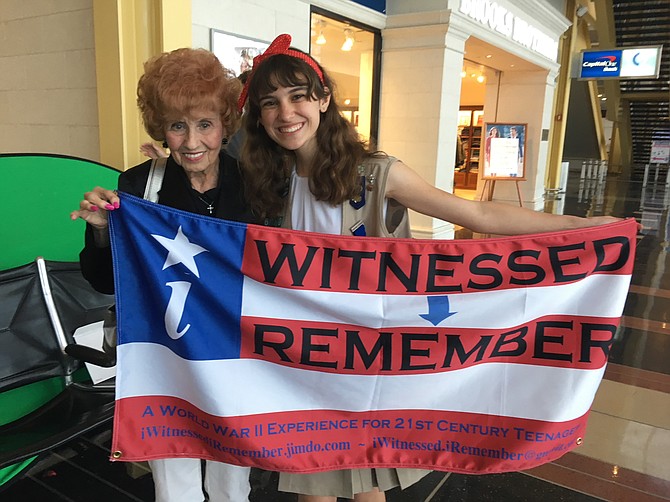 Elinor Otto, 99. a real-life Rosie the Riveter, pictured with Madeleine LeBeau, the founder and president of iWiRe. Photo contributed

On Sunday, Oct. 28, more than 200 Girl Scouts and their families came together with Elinor Otto, a real-life Rosie the Riveter, to dedicate the state’s first Rosie the Riveter Memorial Garden in Oakton and to engage in service projects that will benefit the men and women who defend the United States today. After the United States entered World War II in 1941, approximately six million women entered the nation’s factories to build aircraft and other equipment essential to the war effort. These Rosie the Riveters were pioneers in the nation’s technological workforce at a crucial time in U.S. history. Now, 75 years later, groups across the United States are working to honor their ground-breaking efforts through a series of dedicated rose gardens.

Organized by iWitnessed->iRemember (iWiRe), a non-profit organization committed to remembering American heroes of World War II, this event featured a series of service projects intended to benefit current members of the U.S. Armed Forces and their families as well as a dedication ceremony featuring speeches from Lidia Soto-Harmon, the CEO of the Girl Scouts Council for the Nation’s Capital, and Dr. Sharla Rausch of the Daughters of the American Revolution.

However, the most memorable highlight for many participants was interacting with Ms. Otto, who began working in an aircraft factory during World War II and continued to work in the industry until her plant closed four years ago. After the dedication ceremony, and a short birthday celebration for Ms. Otto, this longest-working Rosie the Riveter spoke individually to Girl Scouts, who asked questions ranging from what it was like during the war to whether she still likes to use a rivet gun. Madeleine LeBeau, the founder and president of iWiRe, was delighted to be able to introduce Ms. Otto to the hundreds of Girl Scouts that attended the event. “One of the primary goals of iWiRe is to remind today’s teenagers that history can be made by all of us – just like the teenagers of the Greatest Generation helped to save the world during World War II. When Ms. Otto tells today’s teens about going to work in an aircraft factory in the middle of the war, we all better appreciate what the Rosies did and are inspired to do more ourselves.”

The Rosie the Riveter Memorial Rose Garden was planted on land contributed by the Girl Scouts Council of the Nation’s Capital at Camp Crowell. More information about the Rosie Memorial Gardens is available at @iwitnessediremember or iwitnessediremember.jimdo.com. Contact Madeleine LeBeau at iwitnessed.iremember@gmail.com (703-817-0687) or Josephine Aiello LeBeau at bjalebeau@gmail.com or (202-615-5791) for more information