A year after McLean resident Bijan Ghaisar was shot and killed, neither the Park Police nor the FBI has released a report on what happened. 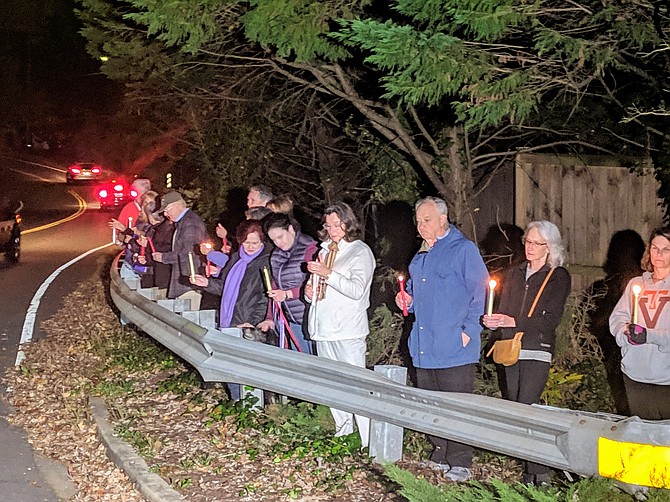 Last week, one hundred Mount Vernon residents joined Bijan Ghaisar’s family in a candlelight vigil at the shooting site. The Ghaisar Family is holding another vigil on the one-year anniversary of their son’s death on Saturday, Nov. 17, at 6 p.m. at the Lincoln Memorial. More at www.facebook.com/wearebijan/

On Nov. 17, 2017, coming home from work around 10 p.m., I saw police lights at the end of Alexandria Avenue where it intersects with Fort Hunt Road in the Mount Vernon area near my home. I assumed there was an accident.

The next morning, I learned that an accountant from McLean, Bijan Ghaisar, had been shot by two U.S. Park Police officers after he drove away after being rear-ended by an Uber driver on the George Washington Memorial Parkway near Slater’s Lane. Very little about the Park Police’s official story made sense to me the next morning.

About two weeks later, I sent a letter to the Federal Bureau of Investigation (FBI) asking a series of questions. I received a cursory response.

About two months after the incident, the Fairfax County Police Department (FCPD) released a dash cam video of the incident starting near Dyke Overlook on the George Washington Memorial Parkway. The video showed Ghaisar driving down the Parkway slightly over the speed limit trailed by two U.S. Park Police cruisers. Anyone who drives the Parkway knows that without adequate shoulders there are few places to pull over.

Mr. Ghaisar stopped his car on the hill up to Morningside Lane and the officers drew their guns and shouted commands. Ghaisar then drove away at a normal rate of speed. As he drove away, one officer slammed the butt of his pistol on Ghaisar’s trunk in frustration while shouting at him.

Ghaisar exited the Parkway after the stone bridge and turn west onto West Boulevard Drive and then left onto Alexandria Avenue. As Ghaisar approached a Fairfax County Police cruiser partially blocking Alexandria Avenue at Fort Hunt Road, Ghaisar slowed, stopped and then began to slowly move his car around the right side of the FCPD cruiser after the Park Police officers again drew their weapons.

While the U.S. Park Police took the positive step of referring the matter to the FBI for an independent investigation, neither the Park Police nor the FBI has released a report. Arlington County has not released the 911 tape. It is very troubling that as the one-year anniversary approaches, we still do not know the names of the officers who shot Ghaisar, their explanation for the shooting or whether any de-escalation measures were used.

Mr. Ghaisar leaves behind two grieving parents and a sister who still have no explanation for why their family member was killed, despite their numerous requests.

A community’s faith in law enforcement requires transparency in officer-involved shootings. Recent cell phone, dash camera and body camera videos have shown the public how officers are often presented with difficult situations and are required to make split-second judgment calls that can be the difference between life and death and videos provide context. However, the video that we have seen shows that the Ghaisar situation presented zero threat to the police or public safety.

Very disturbing is the complete lack of transparency by the federal government about what happened. Congressman Don Beyer has demanded answers.

Last week, one hundred Mount Vernon residents and Bijan Ghaisar’s family joined me in a candlelight vigil at the shooting site. The Ghaisar Family is holding another vigil on the one-year anniversary of their son’s death on Saturday, Nov. 17, at 6 p.m. at the Lincoln Memorial. More at www.facebook.com/wearebijan/

Our community deserves answers and I intend to get them.

Please email me at scott@scottsurovell.org with your suggestions and feedback.