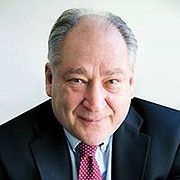 Marc Elrich, newly elected Montgomery County Executive, wants residents to know that he is ready to hear from them.

“My doors are open,” he said during his acceptance speech on election night. “I actually want to talk to people.”

To that end he has set up a number of listening sessions. The first will be in Potomac on Thursday, Nov.15, from 7-8:30 p.m. at Cabin John Middle School, 10701 Gainsborough Road.

“…I have scheduled listening sessions to hear from residents; of course, I will not be able to respond to all of the suggestions and comments, but it is the beginning of what I hope will be an ongoing conversation with our residents,” Elrich wrote in a post-election letter to supporters.

In his acceptance speech Nov. 6, Elrich, 69, thanked his supporters for the role they played in the election and reminded them of a few of his goals for the county he will lead for the next four years.

One of those goals, one he admits he will not attain, is to reduce greenhouse emissions in the county to zero by 2035. It’s too ambitious, he admitted, but setting a reachable goal means there is an endpoint and he is not willing to create an end to his plan to lead the way to environmental sustainability.

“If the climate situation in this county is not a fricking emergency, I don’t know what is,” he said.

Another of Elrich’s goals is closing the achievement gap in education. It is an “emergency” and “unacceptable,” he said.

His multi-faceted solution to the problem begins with a higher minimum wage in order to create more stable households. As a former elementary school teacher, Elrich draws a direct connection between staple home life and students’ ability to focus on school work.

Other issues he mentioned during that election night speech were creating a more efficient, effective county government; growing small businesses — “We need to grow the economy from the bottom as well as the top,” he said — and building a Bus Rapid Transit system which will move people to and from work faster and in a more environmentally sustainable way.

He comes to the top job with years of experience in local government. He spent 19 years as a member of the Takoma Park City Council and served on the Montgomery County Council from 2006 until the present.

Elrich’s schedule of listening sessions other than Thursday’s at Cabin John Middle School are: