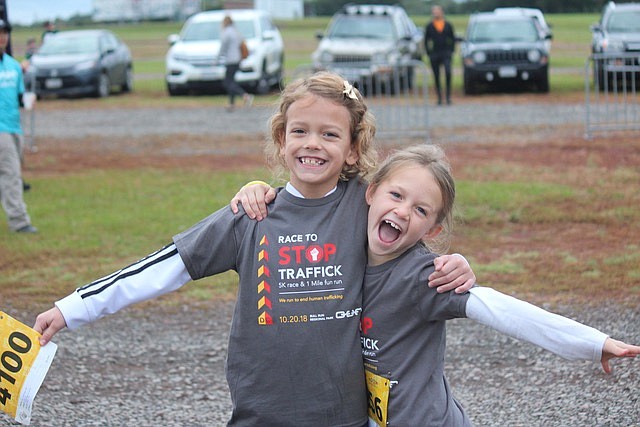 Lucy Fox (left) and Giselle Fox at the start line for the 1 mile fun run.

The morning was overcast, chilly, and teasing rain as the volunteers began marking the course and setting up their tables at Bull Run Park's Special Events Center. Oct. 20 was race day for the 220 (some virtual) participants of Race to Stop Traffick, DC. The 5K and mile fun-run, spearheaded by Coastal Communications Consultants, Inc., was an active and healthy way to raise money for Operation Underground Railroad, a non-profit organization that sponsors undercover missions to free victims from human trafficking.

Racers were greeted by volunteers in bright yellow shirts who provided them with their racing packets and directed them to other available activities. A kids’ zone with hula hoops, bean bag toss, and other similar games provided warm-up options and just plain fun for the 50 children and youth who signed up to race. A local magician performed magic tricks following the 5K.

Two representatives from U.S. Marine Corps Base Quantico brought a Land Assault Vehicle (LAV-25) for static display and allowed the children to climb inside and out. A Centreville volunteer fire station sent members to monitor for any medical emergencies and opened their fire truck and ambulance for exploration.

A few of the 13 local sponsors of the event sent representatives to mingle with the over 300 attendees. Racers and spectators alike were impressed by the 24 bulging gift baskets that were raffled off later in the morning. Ticket holders could select the prize they hoped to win by adding their tickets to the accompanying jar. The raffle prizes, collected from more than 80 donors, were valued at nearly $5,000 in goods and services.

The rain held off and the fun-run began at 10 a.m. measuring just under one mile. The 5K followed at 10:30. Participants ranged in age from infants to grandparents, and although the infants needed their parents to push them in strollers, one woman with two prosthetic legs speed-walked the entire course, throwing her hat in the air as she crossed the finish line. Winners of the 5K were announced in five categories and the raffle drew a large, hopeful crowd. More winners walked away with gift baskets.

The true winner of the day was Operation Underground Railroad, which now has almost $7,500 more to use in their fight against human trafficking. The International Labour Organization estimates nearly 21 million victims, 26 percent of which are children, are enslaved in sex trafficking world-wide. Although the race is over, the fundraising campaign will remain open for contribution online via the race website until the end of the year, with a goal to reach $15,000. The race will return in October of 2019.