The race for the troops held at Reston Town Center. 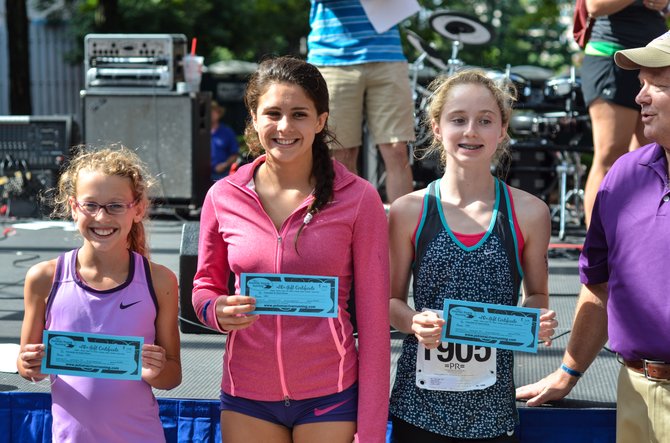 Winners of the female age group ages 1 to 14 were Sarah Daniels of Burke, Emily Landeryou of Reston, and Abby Church of South Riding, Va. Photo by Ryan Dunn.

“You guys are rocking the race! Let’s be sure we cheer them on,” said Kelly Kavanaugh, a race announcer with Potomac River Running. Kavanaugh along with other Potomac River Running staff and volunteers helped setup and coordinate the Firecracker 5K race held at Reston Town Center the morning of July 4. The main sponsor of the race was Leidos, previously known as Science Applications International Corporation, an American defense company headquartered in Reston. The beneficiary of the event was USO of Metropolitan Washington-Baltimore or USO-Metro.

“This is our second year of being a charity partner with Potomac River Running, they are an amazing group of people,” said Annabella Riccio, Vice President of Marketing and Development with USO-Metro. USO-Metro is the largest center chartered by USO. They have nine locations and a "deployable" mobile USO to provide signature USO services to the nearly 300,000 military members and their families living in the region and the 150,000 who travel through our local airports.

USO-Metro is a nonprofit organization chartered by Congress, dedicated to "serving those who serve, and their families" in Washington D.C., Maryland and Northern Virginia. It is through the financial support of individuals and organizations in the local community that USO-Metro is able to fulfill its mission. “It is phenomenal to see our community come together to start the patriotic weekend but also support our troops and their families,” said Riccio. 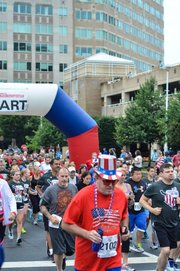 On Friday, July 4 over 2,000 persons participated in the Potomac River Running Firecracker 5K race held at Reston Town Center. The beneficiary of the event was USO of Metropolitan Washington-Baltimore or USO-Metro.

THE 5K RACE began at 8 a.m. and had approximately 2,300 persons registered to participate. In addition to the 5K race, there was a children’s fun run on Market Street at 8:50 a.m. following the 5K finish. There was also a “battle of the branches” competition to see which military branch would have the most turnout in the race. Participants who entered the race could provide details on which branch of the military they were affiliated with. The U.S. Army had most turnout with 296 participants, followed by U.S. Navy with 224 participants.

“We have been in Reston Town Center for about a year,” said Lee Carrick, a senior vice president representing Leidos at the race. Leidos has a lease at 11951 and 11955 Freedom Drive, also known as One and Two Freedom Square at Reston Town Center. Leidos was the primary sponsor for the event, and many Leidos employees participated in the 5K race. Approximately 25 percent of Leidos employees are former members of the armed force. “Potomac River Running does a great job in organizing this event,” said Carrick.

The South Lakes High School junior ROTC color guard presented the flag before the race began. Volunteering for the event as a spokesperson was ABC7 meteorologist Devon Lucie. “You cannot have a more festive start for this family event,” said Lucie. “The flags and the community, it all works perfectly.” Matt Coss, a freshman at St. Mary’s College in California, participated in the race. “It was really exciting this year,” said Coss. “The crowds cheering people on were really awesome.”

AFTER THE RACE refreshments were available at the Reston Town Center pavilion. Cash awards to the top three overall male and female finishers as well as the awards for the top three in each age group were presented at the end of the race by Kavanaugh and Lee Carrick. The top female finisher of the race was Silver Spring resident Etaferahu Temesgen who completed the 5K with a chip time of 16:25. The top male racer was Deme Dereje who had a chip time of 14:35. The female open winners included Etaferahu Temesgen, Tezeta Dengersa, and Lindsay Wilkins. Male open winners were Deme Dereje, Habtamu Wegi, and Josef Tessema.

Runners Kristen Miller and her friend Ted Marshall took time to sign a board at the end of the race. This sign thanked U.S. military service members for their service and will later be put on display at a USO-Metro building. “It was so much fun, and I enjoyed all the patriotism,” said Miller.

Potomac River Running will have a celebration of their 11th birthday on Sunday, July 13 at 8 a.m. at the Potomac River Running Fairfax store at Fairfax Corner. There will be race distance for everyone, a 5k or 1k fun run, and a 100 meter dash for tots. The party will be celebrating customers and racers. The race beneficiary will be Robinson Secondary School’s Cross Country team. For more information on other Potomac River Running events, visit potomacriverrunning.com.