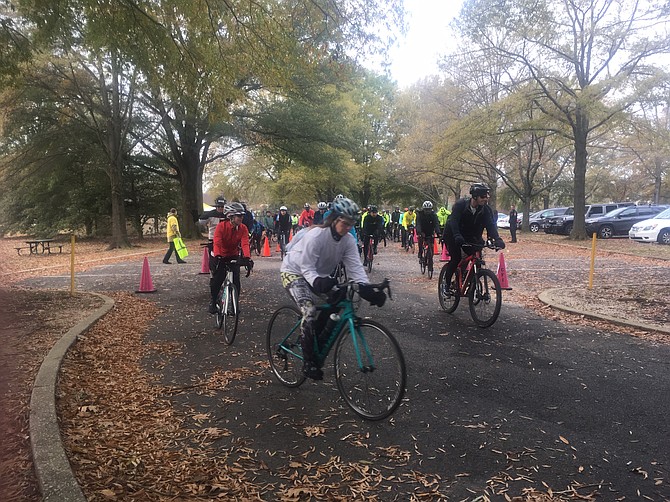 Even with the temperatures hovering around freezing, bicyclists came out for the third annual Tour de Mount Vernon ride, exploring the district’s 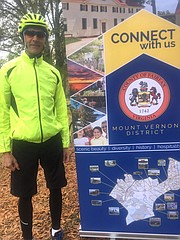 trails and developing camaraderie that brings together the community.

“We look for ways to bring people together,” said Supervisor Dan Storck (D-Mount Vernon) who organized the ride around his district “to show off Mount Vernon,” he added.

The riders gathered in Fort Hunt Park on Saturday morning, Nov. 17, bundled in layers with a variety of head coverings, and set their sites for the trail. This ride was originally scheduled a few weeks earlier but it was rained out. There were two routes mapped out, fitting the needs for the various levels of riders, both starting off on the Mount Vernon Bike Path along the Potomac River. Officers from the Mount Vernon police station helped out, as well as the staff from Storck’s office, members of the Fairfax Alliance for Better Bicycling (FABB), area businesses, and volunteers.

Jim York was in from Mason Neck in the southern part of the Mount Vernon District. He was riding “to get outside and enjoy the community,” he said. York’s neighbor, Chris Hamilton, had another reason. “It’s healthy,” he said.

Jorge Torrico was a dedicated cyclist from Burke that rides a Brompton folding bike from England. He believes in “functional riding,” that is not just for leisure, like riding to the store or other destinations that would normally require a car. Health, pollution and congestion on the roads are reasons he rides, and loves the versatility the folding bike provides.

“I use it every day to commute from Burke to DC,” he said.

Dave Evans is a friend of Storck’s that owns the La Prima catering business, and supplied the food the riders ate at the end of the ride. He’s a Mount Vernon resident and has been involved in the Tour de Mount Vernon from the very beginning. “I ride my bike through this park at least once a week,” he said.

After registration and tweaking the air pressure in the tires, riders gathered in the parking lot to start their quest. Storck manned the microphone,

highlighting the park’s history and spots along the route to look out for, including wet leaves on the Mount Vernon trail that could cause a bike tire to slide. “At Dyke Marsh, you’ll see a boat out on the river rebuilding the dike,” he said.

Captain Matt Owens, the police commander at the Mount Vernon District Station, addressed the riders: “Follow the rules of the road out there.”

Camela Speer, a member of Storck’s staff, helped pull it all together. “It’s a lot of logistics,” she said. They had been planning the event since June, she said.