Burke Has a Heart of Gold Somewhere
Votes

Burke Has a Heart of Gold Somewhere 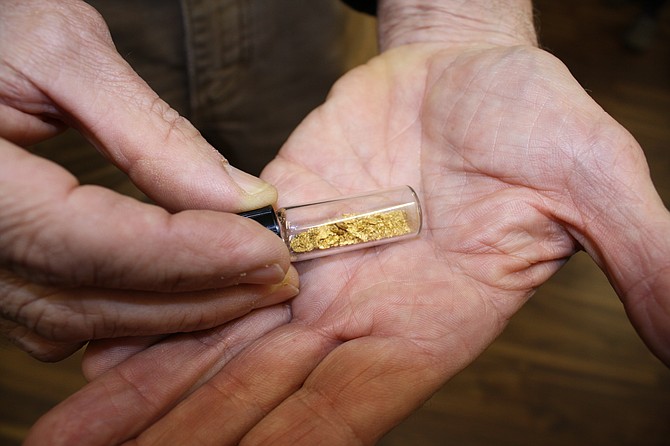 In 1799, a 17-pound nugget of gold was found near Charlotte, N.C., starting the lesser known East Coast Gold Rush, that spread into Virginia. As 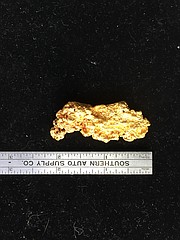 This chunk of gold was found on the east coast recently.

the years passed, and gold coins were produced in Charlotte, the east coast gold belt that stretched from the Harpers Ferry area to the Piedmont died down and all talk of gold went to California.

This was a topic of discussion of Mike Johnson’s recent lecture titled “Prehistory of Gold (Au) in Northern Virginia,” Burke Historical Society sponsored at the Pohick Library. Johnson, a former Fairfax County archeologist, offered geological and archeological data and displayed a vial of gold dust that he found in Northern Virginia over the past year. “This is all year, at least once a week,” Johnson said, holding up the glass vial. “That took a lot of work,” he added.

On the title page, there was an arrowhead he found, with a penny and a little pile of gold dust, just to show a size comparison, and show how panning for gold in Northern Virginia should only be a hobby. There was a nugget found more recently that weighs two ounces, but it’s another rarity and is more valuable to show off than it is to melt down and sell. “That piece is priceless,” said Scott Sprague, a member of the east coast chapter of a prospecting with roots in California. “It’s not about money.”

Johnson’s presentation started with the geologic process to make gold, and evolved into a period 18,000 years ago when the Chesapeake Bay was created, the Bering Land Bridge, the Clovis points and Paleo America. “Five thousand years ago, at least in this area, there were foragers,” Johnson said. A cave drawing of sorts called the Silsby’s Rock pictograph was found at Great Falls in recent years and is now on display in the Great Falls Visitors Center.

The attendees wanted to know about gold around here though, and when talking gold, the hot spots are a big secret – similar to fishing. Around here, most of the land is owned by the government or private individuals so hunting for gold or panning or gold is not allowed.

“There aren’t many places, you’re going to have to get permission,” Johnson said. “One of the rules is, you don’t reveal your source,” he added.

Panning pays off in area streams, but exact locations are a secret.

Someone in the audience brought up the Burke Gold Mine, which Johnson wasn’t familiar with but another person did know that it was about 200 yards from Pohick Creek. There were a few whispers, but the topic quickly changed. Fountainhead Park is in the gold belt, Johnson said, and noted that this was determined from a micro speck of gold he found there.