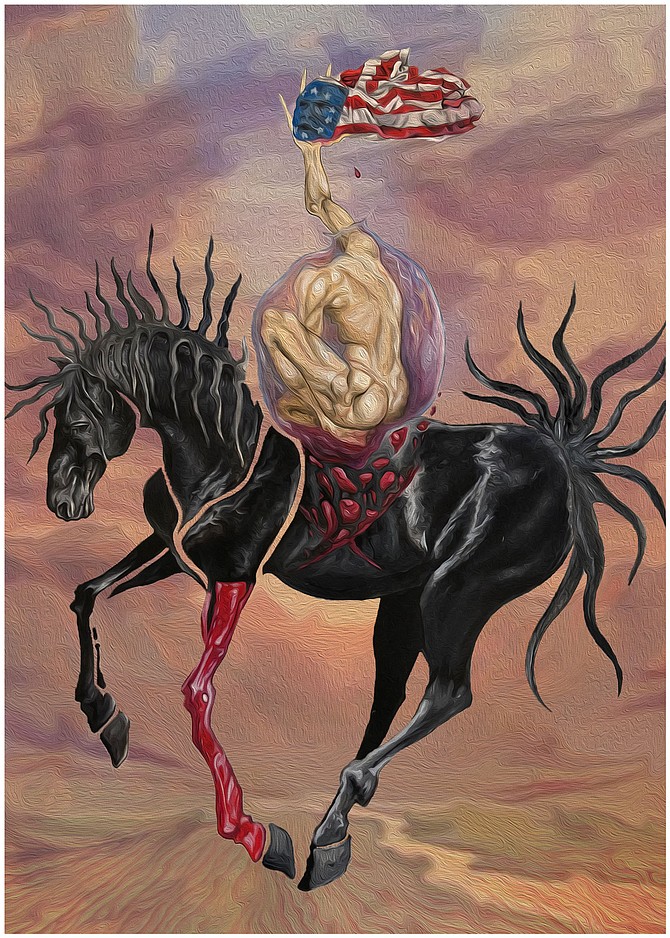 ”Sleepy Hollow” will be presented from Oct. 3 to Nov. 4 at Synetic Theater in Arlington. Photo contributed

Synetic’s adaptation of “Sleepy Hollow” pulls together all the elements that made the theater famous: Gothic horror, iconic characters and imagery, an emphasis on surreal, wordless storytelling that transcends spoken language and makes their productions something akin to live-action dreams (or nightmares, depending on the story). It is an adaptation of the horror story by American author Washington Irving that was published in 1820 — an early example of popular American fiction, especially at Halloween because of the Headless Horseman.

Director Paata Tsikurishvili said it’s America’s first real horror story. “And while we've done over 60 productions of world classics, this is the first truly American story we've produced, written and based on events that happened in this country,” he said. “I wanted to expand our repertoire into that genre, and this story, with its surreal elements of magic, mystery, and myth, seemed perfectly fitted to our style and a great way to start,” he said.

What they were trying to accomplish was, first of all, to retell the story in a unique way, he said, ”to take the iconic characters and images that everyone knows so well and do something unusual and surprising with them, taking the characters in directions that audiences might not expect, but that nevertheless maintain the flavor and feel of the original story.”

As far as challenges, he said: “Telling any story without words is always a challenge, particularly when dealing with a central mystery and a ‘big reveal’ at the end, as we are here. We've never tried this before, at least not in a wordless format, so we've had to have to keep the story as clear as possible to make sure that reveal has all the impact it needs to. Doing that without the benefit of dialog or exposition was probably our biggest challenge.”

He said what audiences should take away from the play are: “That things are not always what they seem; that legends and myths can have a completely different, 180-degree reality from what we think we know about them; that the ‘good guys’ aren't always good and that ‘monsters’ aren't necessarily what they seem either,” he said.

Scott Turner is playing the role of the Headless Horseman, or Hessian, a character that is so iconic that everyone has an idea about him, and sadly, that idea can be focused on the character as a horrible villain, he said. “However, do we stop and think about who he was before the war? What about his family? Does he have a wife or children back home?” he asked.

“In my research, I have learned that there is a complicated history of how the Hessians soldiers came to fight alongside the British in the American Revolution, and some of the stories that I have examined from that history are shockingly tragic,” he said. “The Headless Horseman in our production represents many of those stories. He isn't simply a violent supernatural interloper (much in the same way the Hessians were presented to the American colonists); he's a young man who found himself mixed up in a conflict that was far larger than he ever knew.”

He added: “With any wordless production at Synetic, the trick is telling a clear and consistent story without dialogue. With this being my largest role with Synetic to date, I have had the privilege of working closely with Paata and the rest of the cast to shape the story of my character and the show at large. I've learned a great deal from Paata about the vision it takes to recognize what moments serve a story and what do not. It is sometimes a painful process to cut out a moment that, as an actor, I may really love, but Paata has been a wonderful coach in helping me recognize that ultimately everything on stage must work to serve the story. It becomes larger than the actor, the moment, or the movement; it's about the audience's experience,” he said.

As far as audience takeaways, he added: “I think I want people to walk away from this show with the knowledge that there are always two sides to every story. While this take away might sound cliche, I think our production takes a story that is so familiar as a piece of American folklore and pushes its tropes to their breaking point. In doing so, it sheds new light on characters and archetypes that pop up (in some form) in almost every American story. It asks people to reconsider things and discover their deeper layers. If that kind of perspective finds its way into other aspects of people's lives, we'll all be a bit richer for it.”

Synetic Theater is presenting “Sleepy Hollow” from Oct. 3 to Nov. 4. Show times are Wednesdays through Saturdays at 8 p.m.; Sundays at 2 p.m. Tickets are $20-$60. The venue is located at 1800 S. Bell Street, Arlington. Visit www.synetictheater.org.