“Stop domestic violence and sexual assault for your friend, your neighbor, yourself.” 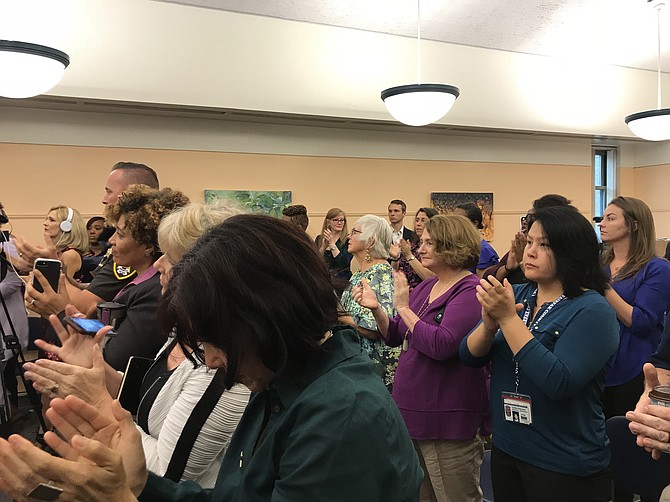 Attendees at the “Make the Call” panel presentation in recognition of Domestic Violence Awareness Month 2018 applaud Del. Kathleen Murphy (D-34) after she announces publicly for the first time: "I am a survivor. I was a victim of sexual assault in college. … I believe when we stand together, side by side ... and we can say it, out loud, 'We are victims of abuse’ ... we demonstrate we can move forward and win." Photo by Mercia Hobson. 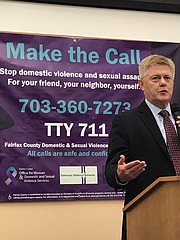 “Domestic Violence affects people from all walks of life," said Supervisor John C. Cook (R-Braddock) after the panel presentation. "I admire the courage of these elected officials who shared their very personal experiences in an effort to help others through awareness and reducing stigma.” 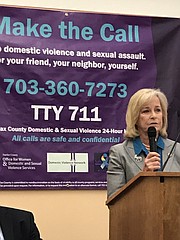 Del. Kathleen Murphy (D-34), shared, for the first time, that she is a survivor of sexual assault. “I want you to know in this Sexual Assault and Domestic Abuse Awareness Month, there are a lot of stories out there that have never been told. That doesn't mean they didn't happen." 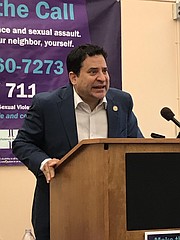 "The anger isn't at the bastard who did the crime, the anger is at the victim. I don't know of any other crime where that happens,” said Del. Mark Levine (D- 45) at the Oct. 4 Fairfax County panel presentation, “Make the Call.” Levine’s sister was murdered by her husband.

Del. Kathleen Murphy (D-34) shared her personal story: "It's taken me a long time to stand here and say that I am a survivor. I was a victim of sexual assault in college, so I understand what Dr. Blasey has been saying. This is the first time in public I've ever said this. You are the first people I've ever admitted this to. I know what it's like to hide. I know what it's like to know that people probably won't believe you if you tell them.”

Presenters addressed domestic violence in their own way, either as moderate Tom Goodwin said, "by telling a story because it is in the interest of advancing understanding of the dangers and challenges posed by domestic violence, or whether it is to advance public policy."

The 2018 campaign, "Make the Call" was a "logical continuation which would feature not only the 24-hour hotline number 703-360-7273 but also information on how victims react and who has become sufficiently engaged and involved.”

The presentation was planned by the county's Domestic and Sexual Violence Services and Domestic Violence Prevention, Policy & Coordinating Council.

BRADDOCK DISTRICT Supervisor John Cook emphasized domestic violence is not someone else's issue. It impacts a significant portion of the population.

One in four women and one in seven men are victims of abuse, and "then there are the children," he said. Whenever there is a victim of domestic violence, Cook noted, there is also a perpetrator. A quarter of the population is impacted by domestic violence.

"Children, even if they're not directly the recipient of violence, by being in a home where there is violence, by observing violence, because they are young, even infants have been proven to have lifelong impacts," said Cook. "If we don't help early and now, we will see them again in the criminal justice system; we'll see them in the human services system."

This month the county launched an initiative to help children recover from domestic violence. Cook said if children involved are not supported, the economy is impacted. Later in life, Cook said, "They're not able to be a full participant in our society, our neighborhoods, in our community." If such a large portion of our population is so negatively impacted, then all of us are feeling that impact whether we know it or not."

DEL. EILEEN FILLER-CORN (D-41) sponsored bills dealing with campus sexual assault, and even though earlier versions did not pass, the last bill became a driving force in the passage of a Memorandum of Understanding between campus law officials and law enforcement agencies.

Filler-Corn said she helped sponsor HB 1343 dealing with campus sexual assaults and requiring reporting to the local Commonwealth Attorney. According to Filler-Corn, although that bill and the language were rolled into another bill, "the entire language was actually incorporated and signed into law."

Bill HB 659, which Filler-Corn sponsored, did not focus on punishment, but rather prevention through Family Life Education. The curriculum incorporated age-appropriate, evidence-based learning centered on domestic violence, healthy relationships, sexual assault, and the meaning of the word "consent." Although Bill HB 659 passed, Filler-Corn said the words “meaning of consent” were stripped out. However, in 2017 she introduced a bill, one of the first in the county to pass which actually codified teaching the meaning of consent in a family life education.

MURPHY SAID, before sharing her personal story, that much of her focus in the legislature had been on guns and getting guns out of the hands of domestic abusers: "Statistics are too clear that guns in their hands mean victims can be killed."

Murphy sponsored a bill to make the second conviction for domestic abuse a felony. However, it failed, she said, because it would have cost the Commonwealth $15 million. "Why is that possible? Because there were over 11,000 men or people convicted for the second time of violent domestic abuse," Murphy said.

In sharing that she is survivor of sexual assault, Murphy said her experience echoed other victims of domestic and sexual assault: the fear of not being believed; wanting to hide; social attitudes as the abuser is seen as charming by others; and the fact that assault can happen to anyone.

"I'm here because of the bravery of that woman [Dr. Christine Blasey Ford]. It's contagious … I believe when we stand together, side by side; when we look at our past and can acknowledge what happened, and we can say it, out loud, 'We are victims of abuse, domestic violence … we demonstrate bravery. We also demonstrate we can move forward and win … And that is why I strongly support all of the efforts to prevent gun violence toward victims of domestic abuse and why I want to support Eileen's many bills for keeping our campuses safe for our children. And why I want people to understand that you don't have to be poor. ... I want you to know in this Sexual Assault and Domestic Abuse Awareness Month, there are a lot of stories out there that have never been told. That doesn't mean they didn't happen."

DEL. MARK LEVINE (D- 45) said that since he had been involved in Domestic Violence Awareness Month, dozens of people have come forward and told him their stories. He also explained how he had seen first hand how two factors, shame and stigma, perpetuate victim blaming and under-reporting of domestic violence and sexual assault.

During the panel presentation, Levine recounted how rape victims themselves are questioned: "Why were you out with that person? Why were you alone? Why were you wearing that dress? The anger isn't at the bastard who did the crime; the anger is at the victim. I don't know of any other crime where that happens,” Levine said.

Levine recalled how 22 years ago his sister confided to him that her husband threatened to kill her. "To my everlasting shame, I didn't think he would do it ... She didn't think he'd do it either. She died because she was ashamed to be with a man who abused her … We should all be ashamed of a culture that gives women that blame."

After his sister’s murder, Levine’s niece and nephew, then ages 6 and 2, were taken care of by his parents, their grandparents, immediately after his sister's death. "But he came back for his kids and literally ripped my niece, then age two, from his grandmother's arms crying and screaming … They would eventually end up in Mexico … it was the closest place to run to ..."

Levine recalled how it took them 10 years to get the children back. "We had to get those kids back home. She was gone, but we had to save their lives ... it took us 10 long years to get justice." Levine said eventually his brother-in-law faced murder charges, and the court found him guilty; he is now serving 56 years in a Tennessee penitentiary.

However, it was not considered child abuse if one killed the mother of a child, Levine said, adding he became the primary lawyer for the case in Tennessee arguing the children should come back to his parents. Contradicting then Tennessee law, Levine maintained to the courts, "If you kill a mother of the child, that counts. That's child abuse and should be considered in custody decisions. Eventually, Levine pushed a bill to reflect such. "The law passed unanimously in Tennessee, every Republican, every Democrat voted for it," said Levine. Levine's current goal is for a similar law to pass in Virginia.

VALISHA JACKSON, secretary, Shelter House, said, "As I stand here today, in October 2018, I am happy to say … there is a month dedicated to awareness, resources, support and countless individuals and organizations resisting domestic abuse of any kind.”

In 1981, Jackson and her mother survived domestic abuse at a time when there were no laws to protect them, no collective effort to create an escape plan, only, as she acknowledged to the audience, "Friends and neighbors willing to be the lookout while my mother attempted to sleep."

In 2018, Fairfax County offers a shelter, a network of safe houses, resources dedicated to those surviving domestic violence, a bipartisan push by elected officials to the people of Fairfax County to "Make the Call.”

“We must do more,“ Jackson said. Congregations are silent when church leaders tell them their salvation is in jeopardy if they divorce their abuser. Women who defend themselves against their abusers are incarcerated due to mandatory minimums and inflexible sentencing guidelines. Resources are taken away from health and human services, "To make the rich richer, keeping women financially dependent on the abusers, rather than structuring our system to be the safety net and community that we promised to be," Jackson said.

FAIRFAX COUNTY Sheriff Stacey A. Kincaid said, "I was a witness; I was a victim; I am a survivor. It happened to me, it could happen to you."

Kincaid told her story as a means to advance the understanding of the dangers and challenges posed by domestic violence. Kincaid shared that after her mother divorced and remarried, all seemed fine. No one knew though what went on behind closed doors.

"The man she married beat her, my brother and he beat me. He blamed and shamed her to the point she actually believed it.

“This went on for seven years," said Kincaid. She revealed how they escaped one night, found themselves homeless, and although it took a long time, they rebuilt their lives. Kincaid revealed she first told her story two years ago and was helped through the process.

"This is not the society we expect to have, where people think it's OK to put your hands on anyone, especially a child. People do not come forward due to fear, embarrassment, and humiliation. And of course, they believe no one will believe them … I believe you, we believe you, there are people that believe you,” said Kincaid.