Protecting the Reserve in Montgomery County 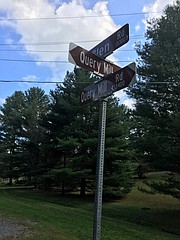 Brown road signs at the intersection of Glen and Query Mill roads indicate they are designated Rustic Roads.

The 2018 Royce Hanson Award will be presented to the county’s Rustic Roads Advisory Committee, according to the Montgomery Countryside Alliance.

Each year MCA honors an Agricultural Reserve champion with the Royce Hanson Award, named in honor of its first recipient, Dr. Royce Hanson, the architect of the Reserve during his tenure as chair of the National Capital Park and Planning Commission.

“Protecting the Reserve takes more than a few tenacious individuals — sustained collective effort is required to keep working farms on the landscape. Sometimes this effort takes the form of years of meetings, stacks of maps and engineering documents plus a dizzying array of acronyms,” according to an MCA press release. “This year, we are proud to honor the Rustic Roads Advisory Committee for their efforts in protecting the arteries of the Ag Reserve, Montgomery County's Rural and Rustic Roads.

“I would say it’s for the committee as a body,” said Caroline Taylor, executive director of Montgomery Countryside Alliance. “It’s really a recognition for the work of the committee.”

“The Rustic Roads Program preserves Montgomery County’s historic and scenic roadways that reflect the agricultural character and rural origins of the county. The members of the Rustic Roads Advisory Committee oversee the program, and advise the County Executive, Council and Planning Board on matters affecting the Rustic Roads,” according to a county website.

​There are seven members of the committee: three farmers, two civic association members, a member with knowledge of roadway engineering and a member with knowledge of rural preservation techniques. They, and “a representative appointed by the Planning Board and staff provided by the County Executive review the Master Plan designations of the roads, development proposals, public projects such as bridge replacements, and they promote public awareness and knowledge of the roads,” the website said.

Current members of the committee are:

Term for members is three years and they may elect to serve two terms consecutively, according to Leslie Saville, the non-voting member of the committee.

“The committee has been working hard for 22 years, it was created in 1996, and [the award] is a great honor,” Saville said.

Rustic Roads are designated by brown road signs, which have recently started going up around the county. The new signs are funded by the county, Taylor said.

“It’s really an important component of educating the public about where the roads are,” she said.

The community award event will be held from 12:30-2:30 p.m. Sunday, Oct. 21 at St. Mary’s Pavilion, 18230 Barnesville Road, Barnesville. There will be food – be sure to RSVP so there will be enough – music by Peace Run, and a stroll along West Harris Road near the pavilion.

Admission is free but tax-deductible donations are accepted. To register, go to www.mocoalliance.org.