What Could Be More Fun than Winning a Cake in Arlington?
Votes

What Could Be More Fun than Winning a Cake in Arlington? 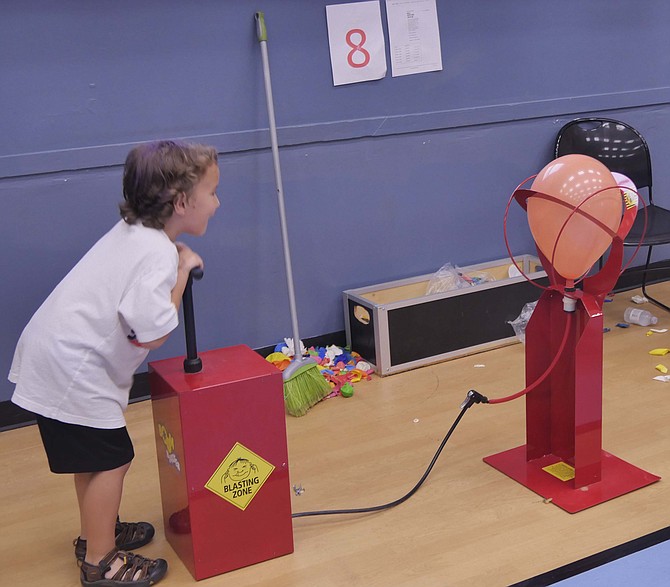 Peter Nortcross pumps up his balloon, waiting for a big burst at the end. Photo by Shirley Ruhe. 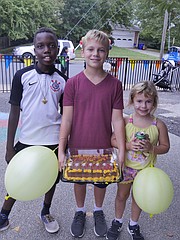 Joseph Bucca holds the grand chocolate cake, emblazoned with St. Ann's Fair in red and orange, that he and his friend Richard Zimmerman won in the cake walk. Joseph's sister Emma Bucca is right by his side to be sure she gets her sliver of cake. 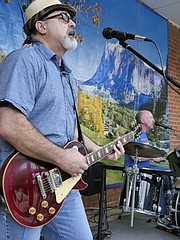 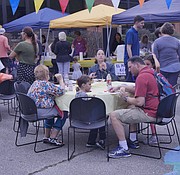 Lunch tables are crowded with styrofoam boxes of Peruvian chicken, slices of pizza and bowls of pink ice as St. Ann's Oktoberfest October 6.

Festivities are in full swing at St. Ann Catholic School Oktoberfest on Saturday afternoon. As you enter the side door, music is playing in the classroom where children march around in a circle waiting for their magic number to be called. A long table full of cakes — chocolate and carrot, caramel-corn topped — sit waiting to be chosen.

A disappointed pigtailed voice wails, "I was so close. I was standing on three and you called two." Ready to start again. "Two tickets in the bucket. You have to pay every time."

A voice down the hall calls out from a classroom, "Halloween costumes here — $5 or less." Next door a Wine Walk waits to begin in 15 minutes.

Indoor games (one ticket) line the walls inside the gym as parents guide small hands aiming plastic guns toward balls perched on the top of bottles. Observers clamp their hands over their ears as almost 7-year-old Peter Nortcross pumps air into a red plastic balloon. He pumps and rests and pumps again. His mother comments, "It's a lot of work but a big thrill when it bursts I guess."

Out in the yard, hungry lunchers choose Joe's Pizza (2 tickets) and El Pollo Rico chicken or Lebanese (5 tickets.) On the other side of the school the smell of freshly grilled bratwurst mingles with kegs of beer. "Longboard has been the most popular today." Woodford’s Reserve entertains in the Beer Garden singing "It's all right now."

The outdoor playground area is crowded with children clutching strings of tickets in one hand and cotton candy in the other. One heads to the moon bounce while her brother waits in line for the cars. A small train waits on the street for a ride around the block. After searching the depths of his pockets, one father is heard to say, "No more, all gone."

The proceeds of this fifth annual fall event will be used to fund school operations and school supplies.